Chinese FDI in the U.S. in 2012: A Record Year Amid A Gloomy FDI Environment

2012 was a record year for Chinese investment in the United States. Chinese firms completed U.S. deals worth $6.5 billion, a 12 percent increase from the previous record of $5.8 billion in 2010. This new record reflects both the growing determination of Chinese firms to expand overseas and the attractiveness of U.S. markets and assets to these investors.

The most alluring sectors in the U.S. are oil and gas extraction, advanced manufacturing operations that help Chinese firms to move up the value chain, and assets that allow investors to store value and gain stable returns such as utilities, real estate or hospitality. Deals closed in 2012 show this diverse mix of motives, with large-scale investments in the extractive industry (Sinopec’s $2.5 billion stake in Devon Energy), high-tech manufacturing (Wanxiang’s $420 million stake in GreatPoint Energy) and entertainment (Dalian Wanda’s $2.6 billion purchase of AMC).

Deals currently awaiting regulatory approval suggest that the growth story will continue in 2013: A Chinese consortium has agreed to purchase an 80 percent stake in AIG’s aviation leasing unit International Lease Finance Corp. (ILFC) for $4.2 billion; auto parts maker Wanxiang has won the non-defense business of battery producer A123 Systems in a bankruptcy auction; and BGI Shenzhen is waiting for regulatory approval to purchase California-based biotech company Complete Genomics for $118 million. In short, we are in the midst of a structural growth story that will transform the China-US investment relationship from a one-way street into a two-way street. 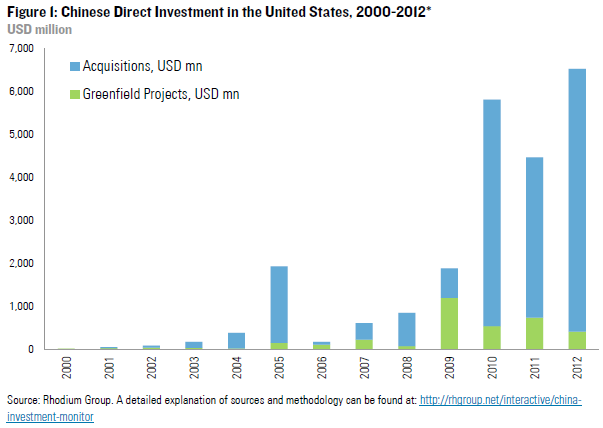 Against the Global Trend

The recent growth of Chinese investment is even more remarkable in light of an otherwise bleak FDI picture in the United States. Before the global financial crisis, the United States was the world’s premier destination for foreign direct investment with annual inflows of $200-300 billion. When the crisis hit in 2009 FDI dropped by more than half. In 2010 and 2011 inflows have somewhat stabilized but declined again sharply in 2012 in light of the fragile situation in Europe (which the major source of FDI for the US) and uncertainties for the US growth outlook. Preliminary data from the Bureau of Economic Analysis shows that FDI dropped by more than 30 percent in the first three quarters of 2012, which indicates that the full year figure will come in at levels not seen since the crisis year 2009 (Figure 2). 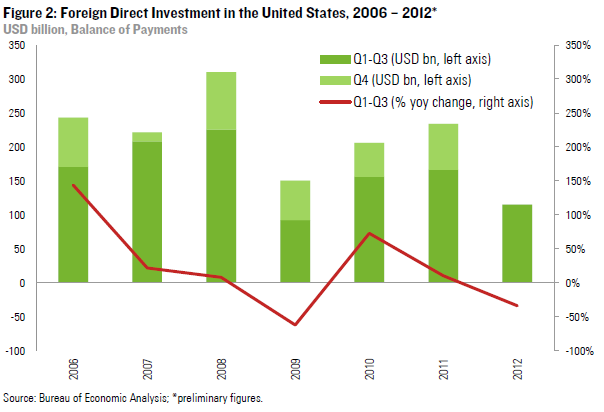 These trends suggest that China could follow other Asian economies in becoming an important source of FDI for the United States. China today accounts for less than 1 percent of total U.S. inward FDI stock, but it has become one of the few bright spots in an otherwise gloomy FDI environment. Compared to five years ago, FDI flows from European economies and Canada were down by more than 50 percent in the first three quarters of 2012. FDI from Asia was holding up better, and China is among the few countries that invested more in the United States than five years ago – an increase of more than 300 percent according to official statistics from the Bureau of Economic Analysis (Figure 3).

These estimates are likely too low as the BEA Balance of Payments figures do not account for flows through offshore financial centers. Figures from Rhodium Group’s China Investment Monitor, which account for such flows, suggest that the increase was even more significant, by nearly 1,300 percent over five years. Growing investment from China increasingly brings benefits for local economies, for example in the form of employment. Today Chinese firms already employ 29,000 people in the United States, up from less than 10,000 just five years ago. 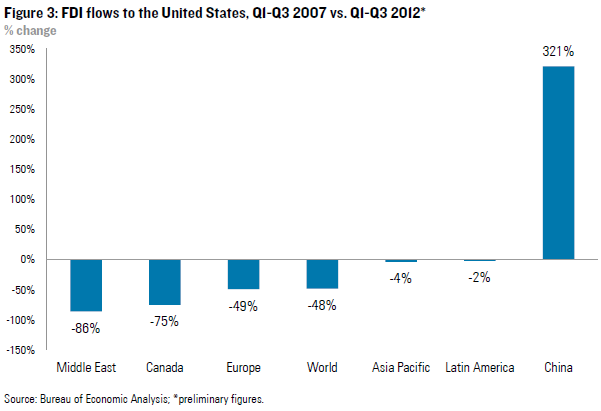 Developments in 2012 also underscored the political hurdles in the process of China becoming a major source of FDI for the US. Compared to other emerging FDI exporters in the past like Japan or Korea, China is not a military ally of the United States but sees itself balancing U.S. hegemony. This puts Chinese investors in the spotlight for a range of existing national security concerns related to foreign ownership, among them ownership of critical infrastructure, political and industrial espionage and ownership and proliferation of defense-relevant technologies. In addition to national security risks there are specific concerns about the economic impacts of Chinese investment due to the role of the government in China’s economy and existing asymmetries in market access between China and the United States.

Unfortunately the past year was a step back for the political debate on these issues. 2012 saw little progress on substance but instead a lot of political games and populist rhetoric, for example a report by two members of the U.S. House Intelligence Committee attacking Chinese telecommunications firms while at the same time dismissing any mitigation options, or efforts from lawmakers and lobbyists to undermine a series of Chinese technology acquisitions, including Wanxiang’s purchase of A123 Systems and BGI Shenzhen’s bid for Complete Genomics. The negative headlines from such politicization are damaging the perception of the U.S. as an investment destination in China, despite U.S. openness and the hard work that is done by governors, mayors and other local officials to promote inward investment. Political games are also a distraction from advancing the debate on important questions such as the risks from Chinese investment in infrastructure or competitive neutrality of state-owned enterprises.

If the United States wants to maximize benefits from China’s beginning outward FDI boom, policymakers need to stop beating the drums and instead focus on solutions that allow the US to maintain an open investment environment while addressing real concerns. Otherwise Chinese investors will carry their cash elsewhere, for the example Europe, where Chinese FDI has topped $10 billion for the second year in a row, almost double of what the United States received over the past two years (Figure 4). Europe’s greater attraction can mostly be explained by commercial opportunities including privatization programs and troubled industrial assets, but different national security sensitivities and the perception that Europe is more welcoming to Chinese investment than the United States did play a role too. It is too early to declare Europe the winner in the race for Chinese investment, but it is time for Washington to move past politics, emphasize openness and tackle structural reforms to ensure the United States remains a top destination for FDI from China and elsewhere. 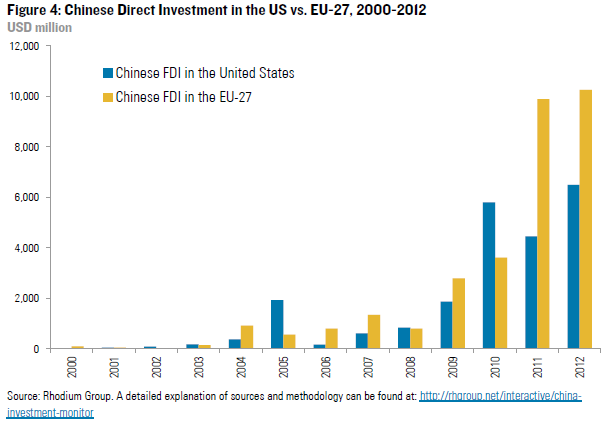