The rebalancing of China’s economy has been underway for five years. As has been widely noted, services and consumption, rather than industry and investment, are increasingly driving growth.  Almost unnoticed, trends in the distribution of national income among workers, enterprises, and the government, also reflect the rebalancing of China’s economy.

As shown in figure 1, the wage share of GDP has risen sharply since 2011, reversing the trend in the previous decade of imbalanced growth when this share declined from 53 percent to 47 percent.  The rising share of wages makes possible an increase in consumption as a share of GDP—one of the key goals of China’s rebalancing agenda. The rising share of compensation in GDP in China contrasts sharply with trends in the US and other OECD countries where, after falling for a decade, the share has plateaued in recent years. 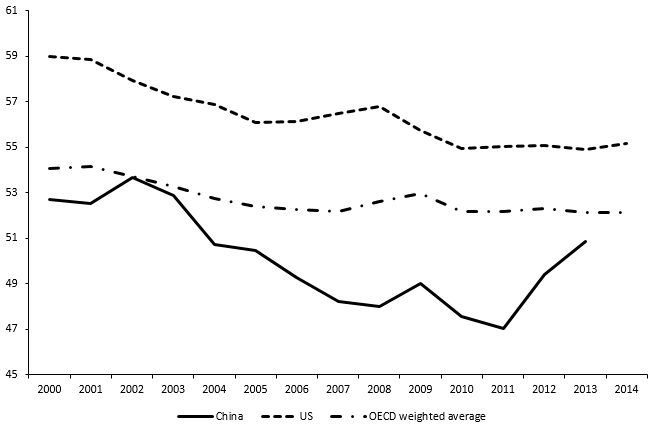 Source: National Bureau of Statistics of China, OECD Data (2016).
Notes: The average share of OECD is weighted by GDP of OECD countries. Turkey is excluded in OECD countries since no data of employee compensation for Turkey is available. Compensation of employee refers to total payments of various forms to the employees, both in cash and in kind. It includes wages and salaries, and the value of social contribution payable by employers such as social insurance and housing fund paid by employers.

The rise in the wage share is the foundation for the increases in disposable income and private consumption expenditure as a share of GDP in recent years, reflected in figure 2. To date these increases in the shares of disposable income and private consumption expenditure have offset only a small portion of the declines that occurred in the prior decade when growth was highly imbalanced.

Since 2011, the rise in the wage share has been balanced by a decline in the share of profits in national income. The decline in the profit share, in turn, has contributed to a decline in investment as a share of GDP, which is essentially the flip side of the government’s goal of increasing the consumption share.  The investment share peaked in 2011 but has fallen since.  The income share of government has increased slightly in recent years.

Figure 2 Household Consumption and Disposable Income as A Share of GDP, 2000—2015 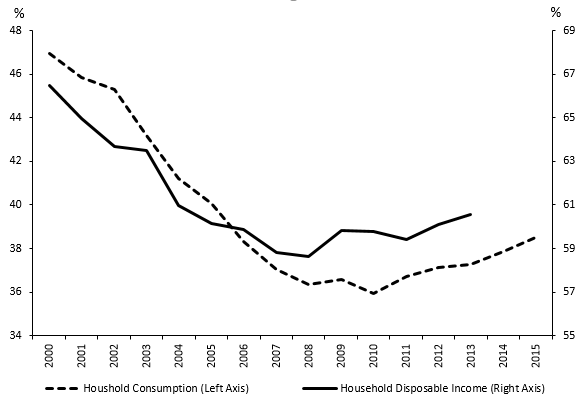 Two factors contribute to the rising wage share of GDP in China.  The first is demographics.  The growth of the working age population (ages 15-64) has slowed in recent years and then turned negative in 2014.  Second, the transition from industry to services-driven growth has increased the demand for labor because services are more labor-intensive than industry, particularly heavy industry which was the dominant driver of growth in the decade to 2010.  The combination of reduced supply and rising demand has led to wage growth much more rapid than the growth of GDP, hence the rising wage share.

Two structural factors will likely lead to a further increase in the wage share of GDP, providing the fuel for future increases in both consumption as a share of expenditure in GDP and a services share in the production of GDP.  First, China’s working age population will continue to shrink for the foreseeable future, further reducing the supply of labor.  Second, a growing share of private consumption expenditure will continue to be directed to services rather than goods, further increasing the demand for labor.  Over the long-run the shrinking labor force may impede China’s GDP growth, but in the short and medium-term it is a favorable factor supporting rebalancing.