China’s stellar economic expansion since 1978 has no doubt run into some problems recently, and some critics have argued for years that its growth has been overstated. The basis of the criticism ranges from charges of outright data falsification to accusations that price deflators used to account for inflation are flawed. A new analysis of the accuracy of GDP statistics emphasizes a third factor: overreporting by local officials. This last theory is bolstered by expert agreement that local officials, whose careers are on the line if they fail to meet growth and investment targets, have an incentive to exaggerate their performance.

The paper, published by the Brookings Institution, concludes that official data exaggerate the growth of value added in industry, domestic commerce, and construction, overstating GDP growth in 2010–16 by 1.8 percentage points per year.[1] Since 2010 the average annual growth rate of the industrial value-added tax (VAT) revenues collected by the State Administration of Taxation is 3.7 percentage points below the growth rate of industrial value added reported by separate statistical authorities, a point of evidence that the paper's argument relies upon (see figure below).[2] The authors explicitly accept the tax data as accurate and assert that the official data exaggerate the growth of value added in the three sectors. 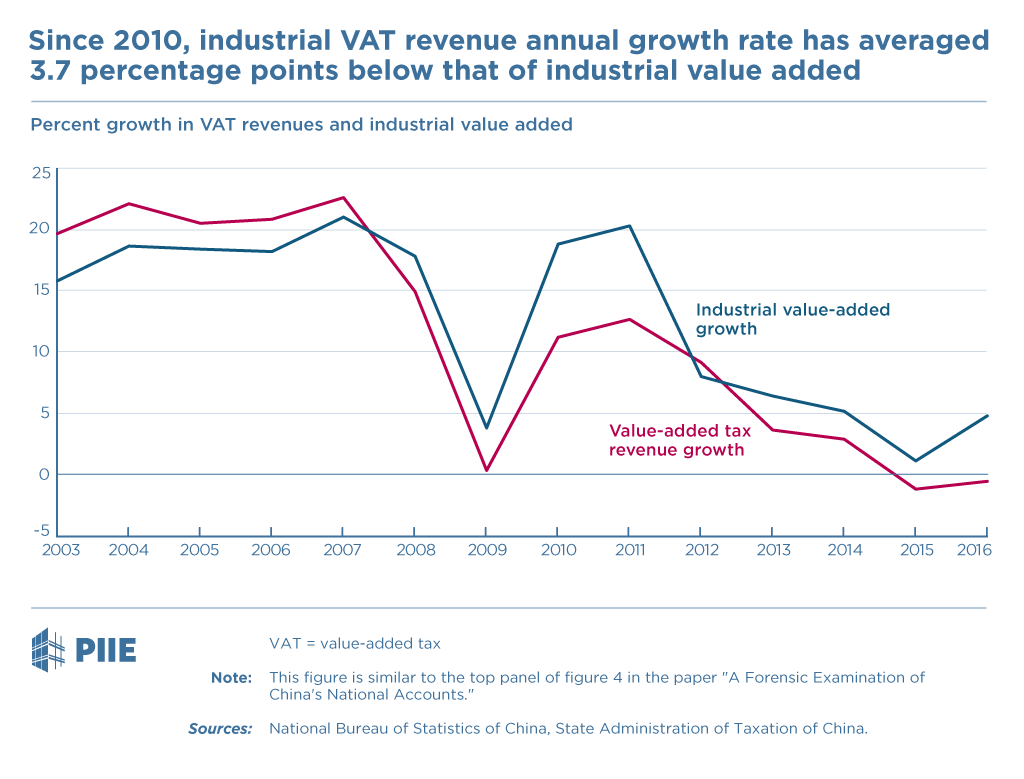 But using VAT data may be unreliable, as David Dollar points out in the comment section of the Brookings paper, because VAT in the industrial sector is not levied on exports produced with imported components in certain export processing regions, notably Shenzhen. Dollar also cites such irregularities as the fact that local authorities periodically grant tax holidays to troubled local industrial enterprises. The Ministry of Finance and the State Administration of Taxation outlawed this practice in 2009, but other evidence suggests that local authorities continued to grant VAT exemptions and deductions.[3]

The most important reason to doubt the accuracy of growth estimates based on industrial VAT revenue growth is that the method for calculating the VAT was adjusted in 2009 in order to allow firms to reduce their tax burden by deducting the VAT embedded in their purchases of certain investment goods (i.e. machinery and equipment) from the VAT payable. This reform, intended to ease the cost of capital acquisition in underperforming regions, was first introduced on a trial basis in 2004 and later expanded by the Ministry of Finance in 2007 and applied to all industrial sectors and all provinces in 2009.

The table below shows a 14 percent growth in investment in machinery and equipment, contrasted with 9 percent growth of industrial value added. [4] If firms were able to deduct the VAT embedded in this investment, these deductions would also have grown at 14 percent a year and would have pushed the growth of the VAT collected by the tax authorities (the hypothetical value in column 4) below the growth of industrial value added.

If companies deduct VAT embedded in certain investments, then the gap between VAT revenue and industrial value-added growth rates widens

The authors’ approach is to assume that the 3.7 percentage point gap between the growth of industrial value added and VAT revenues results from data manipulation by local authorities. Alternatively, assume that firms were able to deduct the VAT embedded in their investments in machinery and equipment, shown in column 2.[5] Then we can calculate that the growth of hypothetical VAT revenues (the sum of VAT collected plus VAT deductions) would have grown at 7.8 percent, or only 1.2 percentage points less than the officially reported growth rate of industrial value added. Thus, the authors’ approach may overstate the exaggeration in official data on industrial growth by a factor of 3 (=3.7/1.2). Since the authors estimate that about 60 percent of their estimate of the overstatement of GDP growth originates in industry, taking the deductibility of VAT embedded in purchases of machinery and equipment into account reduces the authors’ estimate of the annual overstatement of GDP growth from 1.8 percentage points down to 1 percentage point.

As is well known, data on fixed asset investment (FAI) overstates fixed capital formation in China. The two measures were close before 2004, but the gap widened fast after 2004.[6] Beginning in 2017 the authorities’ crackdown on false reporting of FAI led the expansion of FAI falling below the growth of capital formation. One motivation may have been to reduce tax evasion inherent in an overstatement of investment expenditure on machinery and equipment.

The growth of VAT collected may therefore not be a good proxy for the pace of expansion of value added. China’s statistics may overstate growth, but the discrepancy between the growth of VAT revenues and value added provides inconclusive evidence.

1. The authors also use a statistical model to estimate China’s GDP growth. For the years 2009–13, when data are available for all the variables used, the model tracks China’s official data quite closely. Extending the analysis through 2016 but dropping two variables for which data are not available for later years, they estimate that official data overstate China’s growth by 0.6 percent.

5. The authors of the Brookings paper assert, incorrectly we believe, that reported investment in machinery and equipment includes some items that are not eligible for VAT deduction.