Compared to other large emerging markets, China’s investments into cleaner energy have indeed been meaningful. In 2014, renewables accounted for 15 percent of its power-generating capacity (see figure below). In the last ten years, the capacity of on-grid wind power has increased 90-fold, and the capacity of hydropower has more than doubled (large hydroprojects are not included in the “15 percent” figure computed by Climatescope). The share of nonfossil fuels in primary energy consumption (energy that has not been transformed or converted) is somewhat lower, at about 11 percent.

Overall, China looks like a “greener” economy if its renewable power sources are compared with the rest of the world, as shrewdly done by Xi Jinping’s speechwriters. Compared with the other BRICS countries—Brazil, Russia, India, and South Africa—China’s installed renewables amount to more than Brazil’s total generating capacity or Russia’s capacity from nonrenewables. China’s installed wind capacity exceeds that of Germany, Spain, and India combined. (Given its lowest overall development in the BRICS group, India is not expected to transform its energy sector quickly, but Narendra Modi promised on the pages of the Financial Times that "40 percent of installed power capacity will be from non-fossil fuel sources” in India by 2030.) 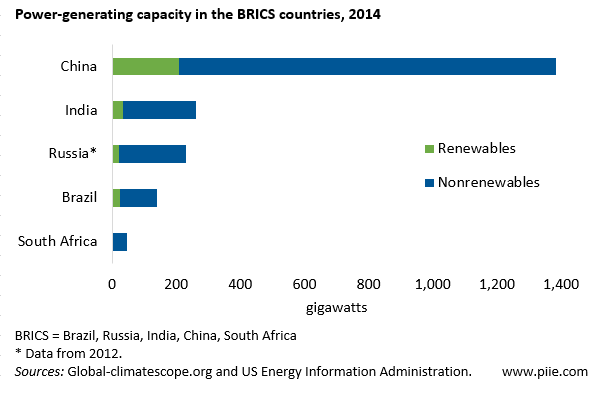 Will the rhetoric about lower carbon development translate into more action by China? The picture remains mixed. China's commitments to curb climate change—known as Intended Nationally Determined Contributions—that the country submitted to the United Nations in advance of the Paris summit suggest a willingness to dramatically improve its high-carbon economy—but several of its stated objectives are too vague. China is still burning too much coal, and recent revisions in official figures show that coal consumption was previously underreported.

The silver lining is that coal power plants are running at about half capacity. The risk going ahead is that China’s environmental reforms at home may mask the impact of its activities abroad. In the last six years, more than 90 coal-based power plants in 27 countries have been constructed (or are being built) by Chinese state-owned enterprises.

A few days prior to the Paris summit, the Ministry of Science and Technology released a 900-page Climate Change Assessment Report with policy options for the Chinese government. It looks like government officials are getting serious about the specifics. (See a discussion of recent adjustments of environmental policies and a list of other initiatives). Half of all energy use today is now subject to mandatory efficiency standards, and the share of production from renewables is growing. The electricity system reform, including a removal of price controls, will also discourage wasteful production.

To reduce pollution, and increase efficiency, China can benefit from access to a broad array of imports. The Intended Nationally Determined Contributions allude to objectives “to accelerate the construction of low-carbon communities in both urban and rural areas, promoting the construction of green buildings and the application of renewable energy in buildings.” This goal will be achieved more quickly if tariffs on environmental goods and services sold to China are scrapped. China is participating in negotiations on the Environmental Goods Agreement, an important initiative that started a year and a half ago—and key members of the World Trade Organization, including the United States, need to devote more effort to these talks.

Analysts may be right that the adoption of the Paris agreement could be a significant milestone for environmental policies in the years ahead. The seemingly less glamorous missions in areas like trade or finance may not make headlines, but they cannot be neglected if countries are serious about controlling climate change.

How to deliver the energy transition