As China’s Capital Outflow Quickens, Will the RMB Depreciate?

China’s State Administration of Foreign Exchange (SAFE) released Q4 2014 preliminary balance of payments (BOP) data in early February. While China still maintained an overall balance-of-payments surplus last year, the surplus dropped sharply to $117.8 billion, less than one third of the 2013 level. Most significantly, China registered a $91 billion capital and financial account deficit in Q4, the largest quarterly deficit in history, reflecting strong capital outflows. The RMB exchange rate, after modest depreciation of 2.5 percent and increasing volatility in 2014, now appears to be under pressure to depreciate further this year. The authorities may not tolerate a sharp RMB depreciation, however, out of concerns over financial stability. If capital outflow were to intensify, the People Bank of China (PBoC) would intervene more often, leading to modest declines in China’s huge foreign exchange reserve. This positive currency “manipulation” will likely keep the RMB exchange at a range of 6.25 to 6.35 per US dollar.

Statistically, E&O could arise from various factors, such as statistical discrepancies, different data collection methods between government departments, or exchange rate conversion differences. Historically, China’s E&O appears to be highly associated with the RMB exchange rate movement, as there has been a close correlation between the E&O and the expectation of the RMB exchange rate. For example, when the expectation of RMB appreciation remained strong for the period of 2002 to 2008, the E&O was persistently positive. In the past three years, as RMB volatility has increased and the RMB is no longer perceived as a one-way appreciation currency, these flows appear to turn negative. It appears that the expectation of RMB exchange rate has ‘guided’ the direction of speculative fund flows. 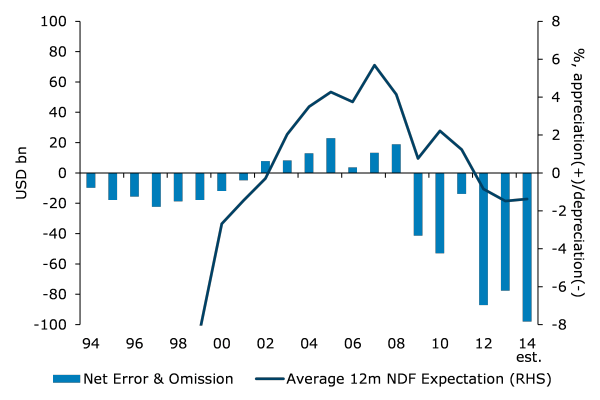 The Q4 capital account deficit is likely to persist into 2015, led by larger capital outflow. While the BOP foreign direct investments (FDI) data still remained positive in 2014, the Ministry of Commerce data suggest that China has already become a net capital exporter if offshore funds raised by Chinese companies are included into FDI statistics. New policies to encourage capital outflow, such as the corporate cash sweeping program and intra-company RMB cross board lending allowed for multinational corporations and Chinese companies, the ease for Chinese mainlanders to buy foreign and Hong Kong shares via the QDII scheme and the Shanghai-Hong Kong stock link, and the ‘Road and Belt’ Initiative, a program to encourage Chinese corporates to expand abroad aggressively to assist ‘industrialization’ of emerging market economies, will potentially accelerate China’s outbound capital flow.

As both speculative capital outflow and legitimate capital outflow are likely to become large this year, the pressure for the RMB exchange rate to depreciate is bound to increase. This could in turn force Chinese corporates to unwind their large short US dollar positions that have been built up quickly in the past few years. Data show that China’s external debt, with 80 percent in short tenor (less than one year), reached $895 billion as of Q3 2014, 140 percent higher than at the end of 2008. If Chinese firms were to rush to unwind their US dollar exposures for fear that the RMB could depreciate sharply, the RMB exchange rate will depreciate further, and during the process, the volatility of the exchange rate will also rise sharply.

Intervention is likely to increase to prevent a sharp RMB depreciation

However, a large RMB deprecation is not likely this year. Given the large foreign debt exposure by Chinese firms and limited development of onshore foreign exchange market, the PBoC may not tolerate a sharp RMB depreciation (more than 5 percent). Such a large depreciation could lead to huge foreign exchange losses of Chinese firms, potentially destabilizing the fragile banking system. In addition, a relatively strong currency will also help China rebalance its economy to a services-led economy in the medium term. Therefore, the PBoC is likely to increase its intervention to prevent the RMB exchange rate from depreciating sharply by allowing for modest declines in China’s still excessive foreign exchange reserves. Indeed, these types of currency interventions or “manipulations” are a positive to the global currency market, and should be welcome. As the RMB has already become an important reference currency for many large emerging market economies, its relative stability will help anchor expectations and somewhat mitigate the negative impact of the ongoing competitive devaluations of key currencies in the world. Such positive “manipulation” will likely keep the RMB exchange rate at a range of 6.25 to 6.35 per US dollar. From a market development perspective, it is hoped that this episode of FX depreciation driven by capital outflows will teach Chinese firms a lesson and induce them to hedge their US dollar exposures from now onwards. This then offers an opportunity for the authorities to encourage fast developments of the onshore foreign exchange market.