Is China the Most Protectionist Country? No, Not By a Long Shot

Commerce Secretary Wilbur Ross labeled China as “the most highly protectionist of the big countries” in his recent interview with the Wall Street Journal. China is a difficult investment environment for foreign firms in some industries, but its trade protection is modest, not significantly above that in large high-income economies like the United States.

China was a highly protectionist trading nation three decades ago, before it initiated negotiations to join the World Trade Organization (WTO). But to qualify for entry and to fulfill its WTO commitments after entry, China drastically reduced its average statutory tariff from about 45 percent in the mid-1980s to only 10 percent in 2015.

The figure below shows the weighted average applied tariff rate for the 10 largest economies. China at 3.4 percent is slightly above the seven advanced industrial economies but well below rates applied in Brazil and India, the two other big economies.[1] 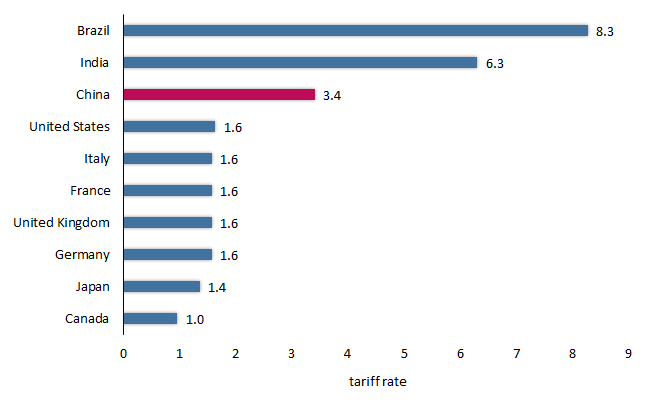 Note: Data for India is for 2013, the most recent available year.

China has also eliminated most of its once pervasive nontariff barriers, such as import quotas and licensing requirements. It does retain tariff rate quotas but has reduced the number of products covered, from 16 in 2001 to only 8 in 2015, and the quotas for these products have been substantially increased. In comparison, the United States maintains tariff rate quotas on 9 products.[2]

[1] China's rate of 3.4 percent is less than the 10 percent statutory rate for two reasons. First, China applies tariffs on some imports at rates less than the statutory level. Second, the lower figure is trade-weighted rather than a simple average.

[2] US Customs and Border Protection, Commodities Subject to Import Quotas.