China’s exports unexpectedly dropped 10 percent in September from a year earlier, a sign of global economic weakness. Year-to-date, China’s exports are down 7.5 percent, a significant enough decline to cause serious concern about the state of China’s manufacturing industry. Interestingly, industrial value added climbed 6.4 percent, so the link between lower exports and weak industrial growth does not seem to be strong. China’s imports resumed their negative spell for the year with a near two percent drop from the same month last year, imports are down more than eight percent year-to-date. This is not brushed off by saying commodity prices are lower -- in fact, import prices have risen this year. This makes the lower import figures a stronger indicator that China’s domestic demand may be weakening, potentially slowing China’s transition towards a consumption driven economy. 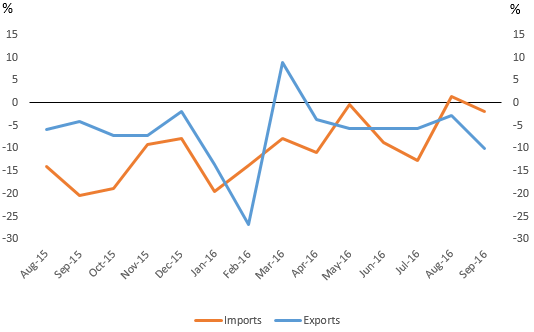 Lower export figures will also put a spotlight on China’s exchange rate, as the renminbi has dropped to a six-year low against the US dollar, guided by People’s Bank of China. When viewed against China’s trading partners, a measure known as the nominal effective exchange rate (NEER), the currency is still up around 17 percent since 2010, although it has trended weaker over the past six months (see figure 2). It is worth pointing out that China’s trade surplus is down 30 percent in the third quarter this year.

Figure 2 China's Reminbi Versus the US Dollar and Trade Weighted 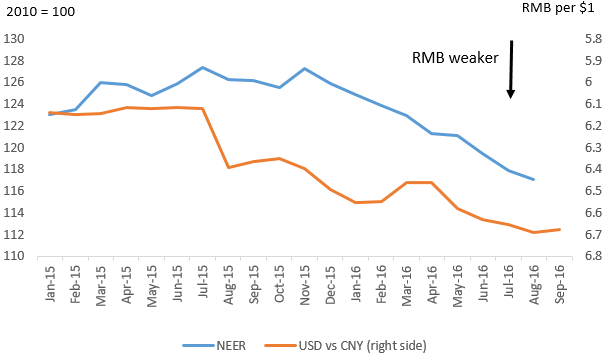 China’s ministry of commerce (MOFCOM) recently stated Chinese exporters have been a “major victim of rising protectionism.” Indeed, rising trade barriers globally are surely part of the reason for the export slowdown and for likely continued headwinds ahead. Last month at the G20 in Hangzhou leaders called for the continued ratification and prompt implementation of the WTO’s Trade Facilitation Agreement, but a number of key countries have yet to ratify the agreement. The leaders also called on countries to use all policy tools including monetary, fiscal, and structural, to generate more growth.

A further look at the data shows that exports to all its major markets have seen big hits this year. Year-to-date, exports to the United States (-8), Japan (-5), and the European Union (-5) have all seen a slowdown. The United States, for its part, has ramped up trade disputes with China at the World Trade Organization, bringing four cases to the WTO’s dispute settlement body over the last year. It has also hit a number of Chinese industries with anti-dumping duties.

China’s exporting firms will remain under pressure for the foreseeable future, and the question remains about the direction of China’s currency, and whether it will continue to depreciate. China has been on a massive binge of infrastructure building its new Silk Road, also known as the Belt and Road Initiative, facilitating greater connection with China’s export markets, but this is unlikely to have any short-term gains.

Can the EU-China investment deal lead to global economic cooperation?

State of Play in the Chinese Steel Industry

What Can China Accomplish with its G-20 Presidency?