President Donald Trump, in defending his trade war with China, has yet again let his Twitter fingers get ahead of reality. He tweeted in late August that “China wants to make a deal so badly. Thousands of companies are leaving because of the Tariffs. They must stem the flow.” This supposed exodus of foreign firms is another element informing his view that China is under increasing economic pressure and thus anxious to accept US terms for a trade agreement. As is the case with Trump’s claim that the US tariffs are slowing China’s economy and increasing its unemployment, the facts fail to support his view.

The trade war has not dampened FDI in China

First, nonfinancial foreign direct investment (FDI) in China is currently running at an annual rate of almost $140 billion, meaning that thousands of new foreign firms are established in China every month. Moreover, as shown in the figure below, since the tariff war broke out in mid-2018 FDI has expanded about 3 percent annually, roughly the same pace as in the previous five years. And the recent data do not reflect massive new investments in chemical plants. China recently approved wholly foreign-owned investments by both ExxonMobil and BASF, each at a record setting $10 billion. Since ground has not yet been broken, these two projects are not yet included in FDI data. Continued large inbound FDI flows are consistent with the expectations of member companies of the US-China Business Council. The Council’s very recent member survey found that 97 percent reported that their operations in China are profitable, and 87 percent said they had not relocated and had no plans to relocate any of their activities. In short, there is little support for the view that large numbers of foreign firms are fleeing China; the opposite seems to be the case.

A few foreign firms recently have left China, but two points need to be kept in mind. First, foreign firms have been moving out of China for decades. Some firms enter with business strategies that fail and then exit. The best example is Occidental Petroleum, which entered China in 1983 with a flawed business strategy and was forced to write off its $250 million investment when it withdrew in 1990. Other foreign firms, especially those exporting the most labor-intensive consumer goods, flourished in China for many years but eventually, as local wages continued to rise, moved production to other countries with much lower wages, for example Bangladesh. Second, China has over a half million foreign-invested firms. Anecdotes of a handful of firms leaving China do not confirm a broad trend.

Many foreign firms in China, especially US firms, are there to produce goods to sell in China

While some firms report that they are considering alternatives to producing in China, it remains to be seen how many ultimately will leave and, of these, how many will relocate to the United States. A couple of factors are at play here. First, a large share of foreign firms in China, especially US firms, are there primarily to produce goods to sell on China’s still rapidly growing domestic market. These firms have no incentive to relocate within Asia, much less to the United States. Caterpillar, for example, makes construction equipment in more than 30 plants in China, almost all sold on the domestic market. Given the high costs of shipping relative to value, it is not feasible to make excavators, front-end loaders, and similar products in the United States and then export them to China. Caterpillar, like other foreign producers of capital goods in China, is very unlikely to relocate any of its production.

Relocating out of China is costly

Second, relocating production out of China is easier said than done. Foreign affiliates operating in China draw on an extensive local supply chain that has been built up over the decades and employ about 25 million Chinese workers, a significant share of which are skilled engineers and managers. Vietnam is commonly mentioned as an alternative, but it is too small to absorb more than a tiny fraction of production by foreign enterprises now operating in China. Its total nonfarm employment is only 44 million, and foreign firms operating there already report shortages of skilled engineers and managers. Relocating a significant number of foreign firms from China to Vietnam would put further upward pressure on its already rising wages, intensify existing skilled labor shortages, and stretch Vietnam’s limited logistical capacity to the breaking point.

Apple contracted with Taiwanese manufacturer Foxconn to produce 220 million iPhones in China in 2018. Think of the difficulties Foxconn would face if Apple asked the firm to relocate from China. Foxconn employs hundreds of thousands of factory workers and tens of thousands of skilled engineers and managers in China and draws on a network of more than 1,500 local suppliers. As Arthur Kroeber, the editor-in-chief of China Economic Quarterly, puts it: “It is fantasy to imagine that such an operation can be quickly replicated in Vietnam or India.”[1]

Despite US tariffs on China’s exports to the United States, it appears, at least so far, that multinational firms, including those based in the United States, continue to find China an attractive environment for new investment. Thus, Trump’s claim that an exodus of foreign firms will force China to capitulate to US demands to settle the trade war is wishful thinking at best. Moreover, few US multinationals already in China are likely to shift their production back to the United States. The president’s claim that his tariffs on Chinese goods will reverse the decades-long decline in the share of US employment in manufacturing very likely also will go unfulfilled. 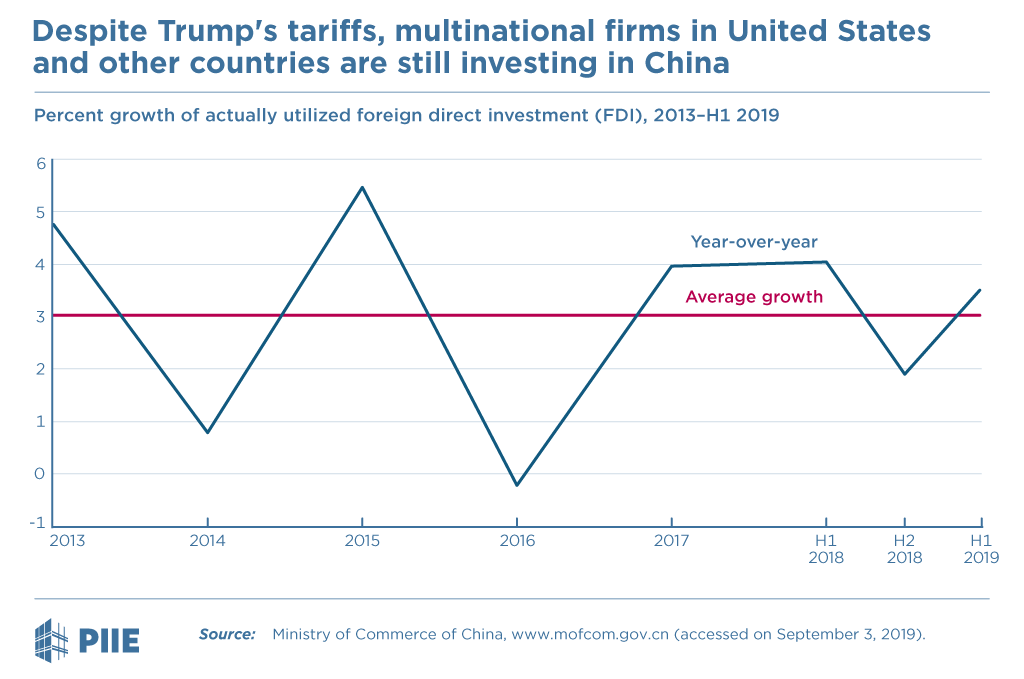 China's Weapons in a Trade War Are Formidable