In general, currency devaluation is good for a country’s exports. Not only does it increase exporter profits but, theoretically, it also allows home firms to lower the prices of their goods sold abroad, leading to gains in competitiveness and market share.

As the figure shows, Japan’s real effective exchange rate (REER) plummeted more than 30 percent between September and December 2014, due in large part to the Bank of Japan’s shift to a more aggressive monetary easing stance. To be sure, the devaluation has been great for the profit margins of major exporters like Toyota as their yen-denominated revenues shifted sharply upwards (see the red line). However, the corresponding drop in prices in contract currency terms—which measures the change in actual prices paid by Japan’s import partners and, by extension, how external demand will respond—has so far been little affected. In other words, Japan’s exporters have so far been content to pocket profits rather than increase their international competitiveness.

Many factors have kept Japanese export prices sticky throughout the first two years of Abenomics. With the recent uptick in Japan’s global exports, a modest trade revival could be around the corner for Japan. However, this likely has more to do with an exogenous pickup in external demand rather than the effect of currency devaluation. 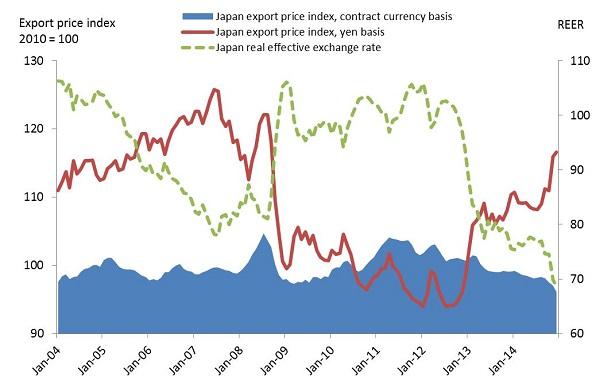