The next round of the Transatlantic Trade and Investment Partnership (TTIP) negotiations is set for July 13-17, and regulatory cooperation continues to be a primary focus of the negotiators. The TTIP presents an ideal opportunity for EU and US policy makers to address the differences in regulatory frameworks. In our latest Policy Brief, we analyze the potential trade gains associated with moving towards similar standards in the auto sector. The chart below reveals the large simulative effect on trade of regulatory harmonization.

Since 1958, UN Economic Commission for Europe (UNECE) established a framework for unifying auto safety and environmental regulations—members were first constrained to Europe, before opening up to the rest of the world in 1995 (the United States is not currently a member). From 1970-2013, 41 countries joined the 1958 Agreement. The chart below shows auto exports of new members with existing members of the agreement, calibrated to accession year. Year zero represents the year a country joined the agreement, and the data shown go from 5 years prior to 5 years post accession. On average, real exports to existing members increase substantially faster than to other trading partners after joining.

This huge trade effect is just one illustration of potential gains for the United States and the European Union if TTIP includes alignment of auto regulations. Freund and Oliver (2015) discuss in more detail the feasibility of this approach given the differences between current US and EU safety regimes. 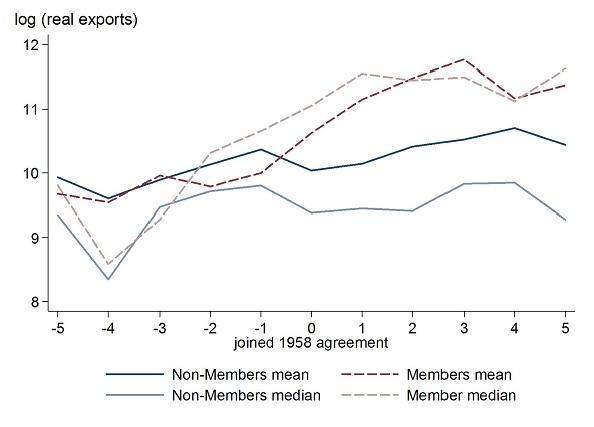