The United States and the European Union have an array of different automobile safety regulations. But have these different rules led to different results in terms of auto safety? The answer would appear to be no. A much bigger factor reducing fatalities in car accidents seems to be stage of development, from state-to-state in the US and country-to-country in Europe. This chart shows the number of fatalities per 100,000 motor vehicles in each US state and each EU member plotted against the GDP per capita of each state or country (in logs). In both the United States and Europe, the number of fatalities declines as GDP per capita rises, and an EU country and a US state with similar income levels are not significantly different from one another in terms of vehicle fatalities. Richer states or countries have higher quality and newer car fleets, better maintained roads, and do a better job implementing safety laws; these differences clearly dwarf any difference in regulatory regimes. The chart implies that both the US and EU auto safety regulations offer similar levels of protection for consumers, a finding to keep in mind as negotiators try to align auto safety regulations between Europe and the US in a possible Transatlantic Trade and Investment Partnership (TTIP). 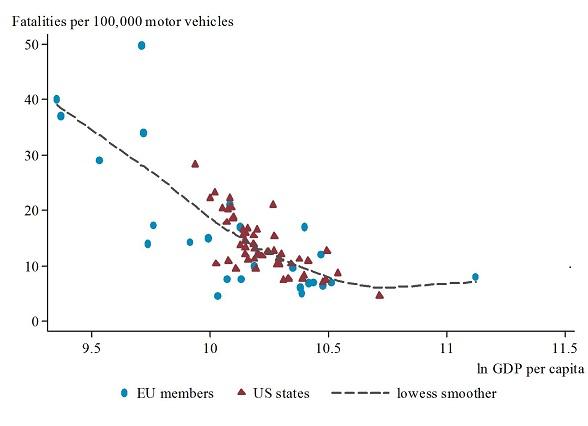