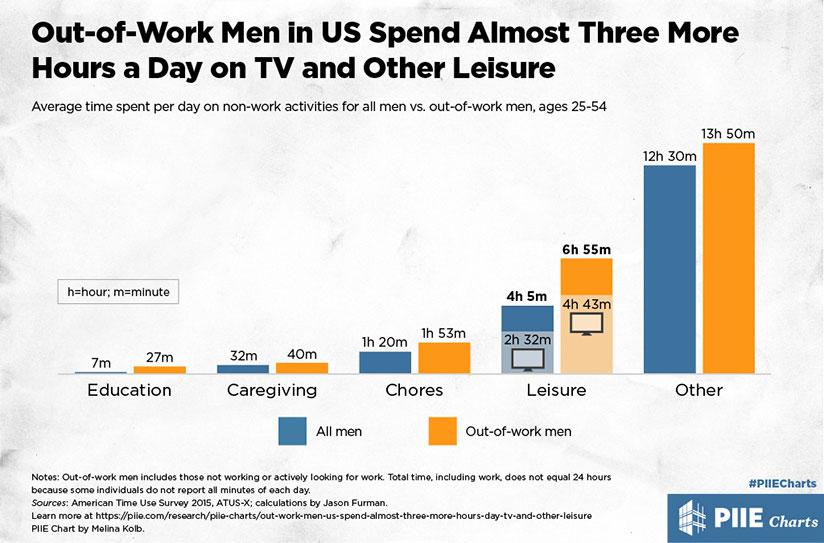 In the past 60 years, the percent of American men of prime working age (ages 25–54) who are either working or actively seeking work has been falling. The United States has seen a larger decline in this demographic than most other advanced economies. This is especially true among less educated men, but the percent has been falling across all education levels.

This PIIE Chart suggests that men are not primarily dropping out of the labor force to focus on household duties or education. Instead, out-of-work men are spending an average of almost three more hours per day on leisure activities than all men in this age group.

But are their choices completely voluntary or do they reflect wider economic realities?

Data indicate that several factors, including fewer middle-income job opportunities and lack of supportive government policies, may have contributed to the long-term decline in labor force participation. There has been lower demand for jobs as relative wages for less skilled work have declined. Additionally, although the US labor market is one of the most flexible of the advanced economies, placing relatively few regulations in the way employers hire or pay workers, it also is one of the least supportive for workers, providing relatively little in terms of job search assistance or training, childcare coverage, paid leave, or unemployment benefits. The United States also has the highest percent of its population in prison out of all countries except the Seychelles. After their release, former prisoners often experience lower demand for their labor and are even prohibited from holding certain jobs, contributing to less participation in the labor force.

This PIIE Chart is adapted from Jason Furman’s presentation on "The Decline of Men Working: Why It Is Happening, What It Means, and What to Do About It" and this column on Voxeu.org.