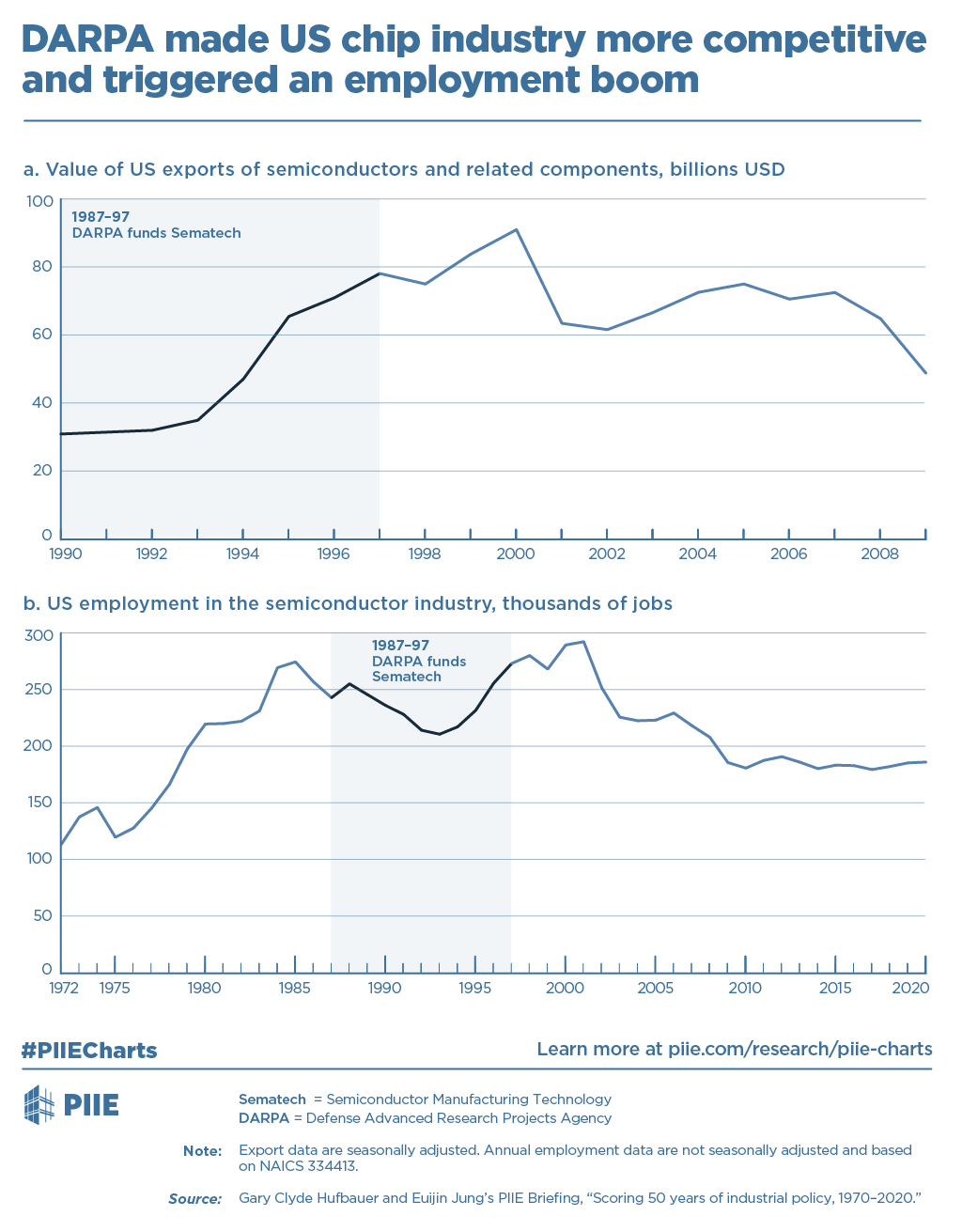 President Joseph R. Biden Jr.'s expansive legislation to boost US competitiveness with China contains $52 billion in production incentives and research and development (R&D) funding for the US semiconductor industry. The measure is not the first episode of US industrial policy targeting the industry: Between 1987 and 1997, the Defense Advanced Research Projects Agency—or DARPA, the R&D arm of the US Department of Defense—dispersed around $870 million of federal funding to a consortium of the 14 most successful chip manufacturers, known as SEmiconductor MAnufacturing TECHnology (Sematech). DARPA's successes offer lessons on effective industry support that can guide the implementation of President Biden's initiative.

The semiconductor industry involves costly and slow manufacturing processes. To address this problem, the Sematech consortium was formed as a nonprofit partnership between chipmakers and government to share R&D; it could not design or sell chips. The participating firms sent R&D personnel to work at its facility in Austin, Texas, bringing 100 to 200 skilled engineers together at a time to collaborate on solutions.

US exports of semiconductors began to grow in 1992 and reached a peak in 2000, suggesting DARPA funding played a role in increasing industry competitiveness. US firms like Intel and Texas Instruments emerged as world leaders, thanks to more efficient manufacturing processes that cut costs and pooled R&D resources that eliminated duplication.

DARPA funding of the initiative also delivered an employment boom. The previous decline in industry employment reversed, then surpassed its previous high, growing from around 210,000 jobs in 1993 to more than 272,000 jobs when federal support for the program ended in 1997. The boom went on to peak at 292,000 jobs in 2001. While the program was not the sole driver of job creation in the semiconductor industry, even if just 10 percent of the employment gains are attributable to Sematech, it can be credited with creating around 3,000 jobs during the DARPA funding period of 1987-97.

Sematech did not turn the United States into an export powerhouse for semiconductors—in part due to US firms' focus on design over fabrication, leaving production to foundries abroad—but it improved production techniques at a critical moment. Accordingly, it could serve as a valuable model of effective industrial policy and help shape future efforts.

This PIIE Chart is based on Gary Clyde Hufbauer and Euijin Jung's research, Scoring 50 years of industrial policy, 1970–2020