The co-movement between the returns on Chinese and U.S. stock market has been evident in recent weeks. In the first two weeks of this year, the Shanghai Composite Index posted a cumulative loss of 18%, while the S&P500 index fell by 8%. Over the last month, the S&P500 index fell on as many trading days as it rose, but it was more likely to fall or rise when the Shanghai Composite Index did so as well. Is such a correlation unusual by historical standards?

Chart 1 shows the rolling correlation coefficient between the returns of the main Chinese and U.S. stock indices (on each trading day, the correlation is calculated for all preceding 120 days). While the correlation has typically been positive over the last 10 years (global factors, after all, affect both China and the United States), there were many periods when the stock returns moved in the opposite direction. 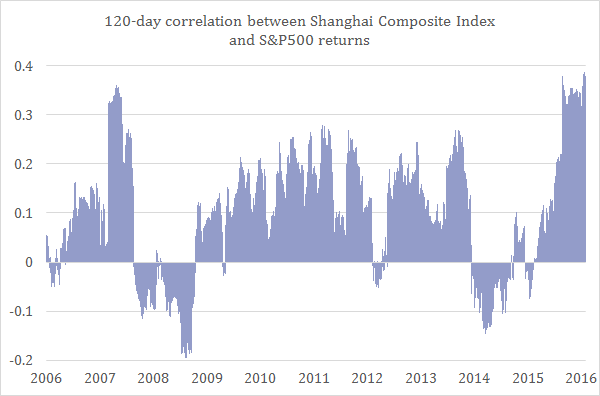 Historical data make it clear that U.S. and Chinese stocks do not always move in lockstep. On 640 of the last 2617 trading days, the correlation over the preceding quarter between U.S. and Chinese stock returns was negative. Typically, the statistical association between the returns on the two stock exchanges was weak: the correlation was either negative or smaller than 0.2 on 81% of all trading days over the last 10 years. The co-movement is statistically significant in some time periods but the destinies of the two financial markets are not always so closely linked.

The last time that the two stock markets moved together as tightly as we witness today was just before the escalation of the financial crisis, from late February 2007 to May 2007. The magnitude of the currently observed correlation is not unprecedented, but it is uncomfortably high.

Chart 2 documents the size of recent losses on the U.S. and Chinese stock exchanges. The returns in the U.S. have stabilized in the second half of January, and a modest rebound of U.S. stocks can be observed at the end of the month, while the Shanghai exchange continued to slide. The patterns from the last week, however, do not offer sufficient evidence on their own that we are returning to a period of lower correlations. 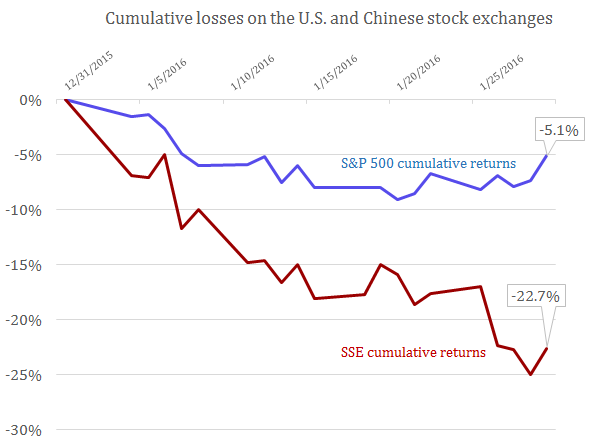