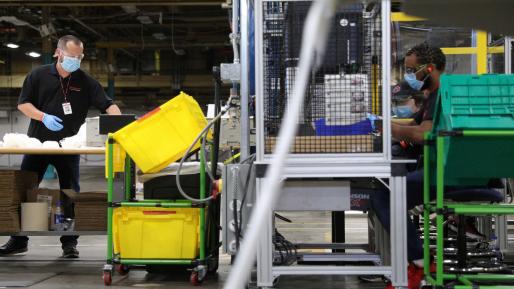 Early in the COVID-19 pandemic, a global shortage of hospital gowns, gloves, surgical masks, and respirators caused policymakers around the world to panic. This paper examines international trade in this personal protective equipment (PPE) during the crisis, with a focus on China, the European Union, and the United States. As the pandemic first hit, China increased imports and decreased exports of PPE, removing considerable quantities of supplies from global markets. For the European Union and United States, the decrease in their imports from China was not immediately replaced by increased trade from other foreign suppliers. Early shortages led to EU and US export controls on their own, domestically produced PPE and other extraordinary policy actions, including a US effort to reserve for itself supplies manufactured in China by a US-headquartered multinational. By April 2020 China’s exports had mostly resumed, and over the rest of the year its export volumes of some products surged, more than doubling compared to pre-pandemic levels. But China’s export prices also skyrocketed and remained elevated through 2020, reflecting severe and continued shortages. This paper documents these facts. It also explores these and other government actions, such as US trade war tariffs and the emergence of US industrial policy in the form of over $1 billion of subsidies to build out its domestic PPE supply chain, as well as potential lessons for future pandemic preparedness and international policy cooperation.