Yet More Evidence that Pay Is Going Nowhere Fast

On March 19 in his budget speech the chancellor, George Osborne, proudly proclaimed that "the Office for Budget Responsibility (OBR) predict earnings to grow faster than inflation this year and in every year of the forecast." The latest data from the Annual Survey of Hours and Earnings (ASHE) published by the Office for National Statistics (ONS) last week shows that, adjusted for inflation, real weekly earnings decreased by 1.6 percent compared to 2013.

The Annual Survey of Hours and Earnings is based on a 1 percent sample of employee jobs taken from HM Revenue and Customs Pay As You Earn (PAYE) records. It reports annually on the gross pay before taxes of employees over the preceding year for everyone with a national insurance number ending in 14, which I know for a fact includes one former member of the Monetary Policy Committee who wants to remain nameless.

ASHE does not cover the self-employed. The headline statistics for ASHE are based on the median rather than the mean. The median is, of course, the value below which 50 percent of employees fall. The ONS, and I quote, says it is its "preferred measure of average earnings as it is less affected by a relatively small number of very high earners and the skewed distribution of earnings. It therefore gives a better indication of typical pay than the mean." Interestingly, the national statistic on pay, Average Weekly Earnings (AWE), only reports means and not medians. Why it does this is unclear. ASHE is also important because it is used to adjust the AWE, which excludes 91 percent of all private sector firms that have less than 20 workers.

But ASHE itself excludes jobs that are not registered on PAYE schemes. These jobs are known to be different to the PAYE population in the sense that they typically have low levels of pay. Consequently, ASHE estimates of average pay are likely to be biased upwards with respect to the actual average pay of the employee population. So the data from ASHE are weighted to UK population totals from the Labor Force Survey (LFS), which is a random sample of workers! What a mess. 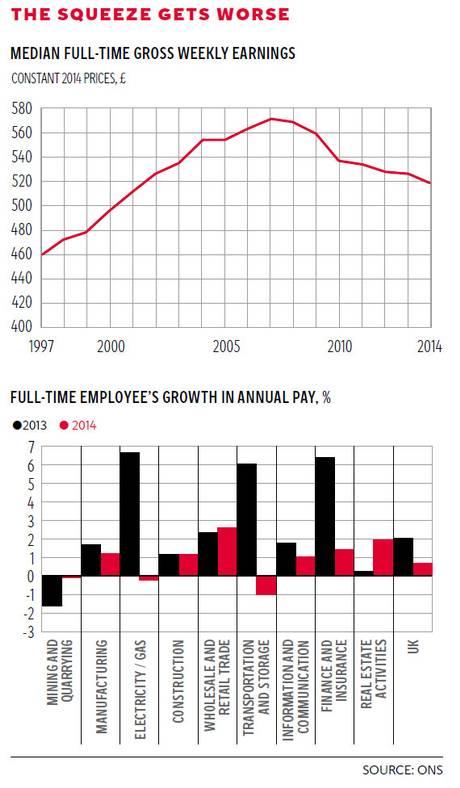 The AWE and ASHE are not directly comparable on all measures of earnings. According to the ONS, the closest measure that can be derived and compared for these surveys is for mean gross weekly pay (excluding bonuses) in Great Britain. In the year to April 2014 the ASHE estimate of mean gross weekly pay (excluding bonuses) for all employees (regardless of whether they worked full-time or part-time) was up 0.1 percent on the previous year. The comparable estimate from the AWE is a rise of 0.5 percent, from April 2013.

The first chart shows the growth in earnings in current and constant (2014) prices. It shows that real earnings are down 8.8 percent since 2010, using the Consumer Price Index as a deflator. No sign of any real wage growth there. As the ONS noted, real wages have continued to fall every year since 2008, including every year of the coalition government.

But the most interesting evidence from ASHE was provided by the ONS at my request, by firm size. This is of particular interest because the AWE excludes workers in firms of under 20 employees and then is adjusted retrospectively based on the ASHE findings. My claim for some time has been that wages in the smallest workplaces are likely to have grown much less recently than in the bigger firms, and so it has turned out. Median gross weekly earnings of all employees—noting that medians are the ONS's preferred measure—in 2014 grew overall by 0.6 percent. But in the smallest firms of less than 20 workers they fell by 2.8 percent. Last year there was little difference, with the overall number of 2.3 percent compared to 2 percent for firms with under 20 workers. In 2013 mean weekly earnings for all employees for the smallest firms grew at the same rate, 2 percent, as overall. This year the overall growth rate is –0.1 percent compared to a drop of 1.9 percent in firms under 20 workers. The AWE is biased upwards and should be revised down in light of this new evidence.

These data relate to the year up to April 2014. What has happened since then? If we look at the upward-biased AWE, we see that total pay in April 2014 was £482, compared with £481 in September. According to the not upward-biased Labor Force Survey, median weekly earnings were £480 in January to March, £481 in April to June, and £481 in July to September. Plus the most recent KPMG/REC Jobs Report showed that permanent staff salaries increased in October at the weakest rate since February, while pay growth for temporary and contract staff eased to a five-month low. That's consistent with the Bank of England agents who in their November report reported "pay settlements had remained modest." No pickup in wage growth.

And still the two members of the irrelevant minority on the Bank's Monetary Policy Committee, Ian McCafferty and Martin Weale, continued to vote for rate rises because "survey evidence of a tightening in the labour market suggested that wage growth might pick up sharply as slack was absorbed. Indeed, the most recent data regarding private sector average weekly earnings raised the possibility that this process was already in train." Not much evidence of that in the 91 percent of private sector firms with under 20 workers where nominal pay has been falling fast. Or anywhere else.