Prior to the Great Recession, nobody would have expected that wages would have been more flexible downwards in the United Kingdom than the United States.

But the world has become much more complicated than that. For example, there are marked differences in recent years between what has happened to the UK and US labor markets. As the economics Nobel prize winner Bob Solow famously noted, the labor market isn't the same as the market for fish. Unemployment has fallen rapidly in both countries but wages haven't responded. Since May 2010 the unemployment rate in the United Kingdom has fallen from 7.9 percent to 6.2 percent in the latest Office for National Statistics release, while the United States has seen an even faster fall, from 9.6 percent to 6.1 percent.

So what has been going on? The charts illustrate for the United States and the United Kingdom the relationship between the participation rate, which is the proportion of those aged 16+ that are in the labor force, that is employed or unemployed, and the unemployment rate. In the latest data we have the unemployment rate at 6.1 percent in the United States and 6.2 percent in the United Kingdom, with the participation rates 62.8 percent and 63.5 percent respectively. 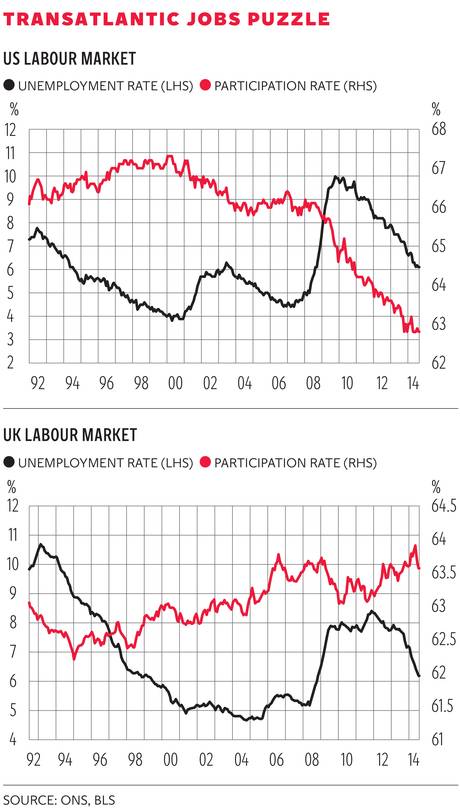 In the case of the United Kingdom the participation rate rises on a steady trend from 1994, through the beginning of 2009 as the Great Recession took hold. It then starts to rise again from the middle of 2012. Of particular note though is the sharp decline in the participation rate in the most recent data over the last two months—from 63.9 percent in May 2014 to 63.5 percent in July. Despite the fact that unemployment fell over this period by 103,000, and the unemployment rate dropped from 6.5 percent to 6.3 percent, this was mostly because of a decline in the size of the labor force as inactivity rose by 150,000.

The recent drop in unemployment looks to be due to the unemployed leaving the labor force rather than getting jobs. Plus employment fell by 34,000, including a drop of 64,000 in the number of full-time workers. So the decline in the unemployment rate may be giving a false read—the labor market may well be loosening once again. It appears that these nonparticipants are ready to spring back into the labor force when there are jobs available, so they are an additional source of downward wage pressure.

But there is something else going on as well. In both countries we have evidence that there has been a sharp rise in underemployment. In both countries we do know what has happened to part-time workers who would prefer full-time jobs. As a proportion of employment, underemployment rose in the United States from 1.9 percent of employment in the middle of 2007 to 5.3 percent in November 2010 and now stands at 4.3 percent. In the United Kingdom the number of part-time workers who say they want a full-time job as a proportion of total employment went from 2.3 percent in mid-2007 to 4.9 percent in the autumn of 2013 and currently stands at 4.4 percent and unchanged over the last three months, April–June 2014. These underemployed are also pushing down on wage growth.

All of this makes it very complicated for central banks to work out what is going on in the labor market. That is why they have focused on wages, as there are so many variables moving at any one time, and this is the simplest indicator. Both in the United States and the United Kingdom there appears to be much more slack than is indicated by the unemployment rate.

The big question is how many inactives will join the labor force as the economy approaches full-employment and how many extra hours workers will work before wages are pushed up. My best guess is that wages are not going to start rising much in either country before the unemployment rate gets below 4 percent. We are a long way from full employment.