The US Needs to Invest in Minds, Not Miners

In J.D. Vance's memoir "Hillbilly Elegy," which recounts the blasted hopes of those left out of the modern economy, grandfather Papaw makes a prescient prediction: "Your generation will make its living with their minds, not their hands." What Papaw didn't foresee was that this shift would be far easier for women than for men.

The US economy has long been moving away from "hands" industries such as mining and manufacturing toward "minds" sectors such as finance, health, and education. From 1970 to 2016, the share of workers in the former declined from 38 percent to 16 percent, while the share in the latter increased from 26 to 44 percent. Here's how that looks: 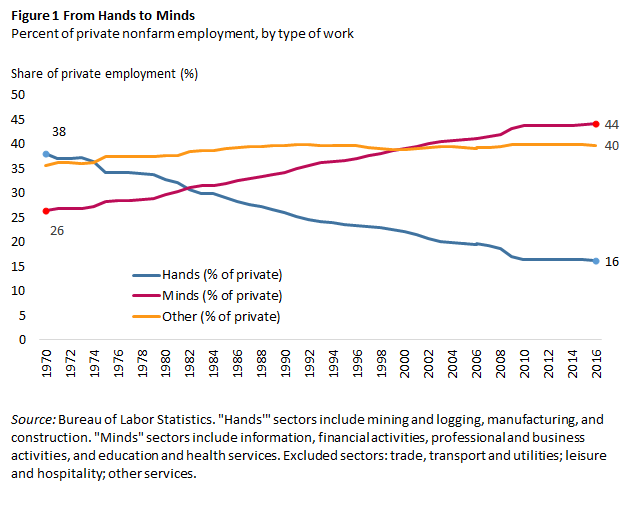 Less-educated men, who occupy more than three-quarters of "hands" jobs, have felt the sharp swing away from physical labor most acutely. By contrast, women comprised half of the "minds" jobs as far back as 1970, and their share grew in subsequent decades as they increasingly joined the workforce.

The steadiness of the shift from hands to minds suggests that technology is the main driving force. "Minds" jobs became dominant in 1982, well before China joined the World Trade Organization in 2001, and continued at an unaltered pace during the hyperglobalization of the late 1990s and early 2000s. Although increasing trade with China might have contributed to the decline in demand for production workers, it clearly wasn't the primary force behind the trend.

Detailed data suggest that new technologies, which tend to have the largest effect at the lower end of the education spectrum, have been better at replacing men's work. Employment in some predominantly male occupations that require a high-school diploma or less—such as metalworkers, printing press operators, and carpenters—has declined by more than a quarter since 2005. By contrast, employment in some female occupations with similar requirements—bakers, manicurists, personal care aides—has grown by more than a quarter. 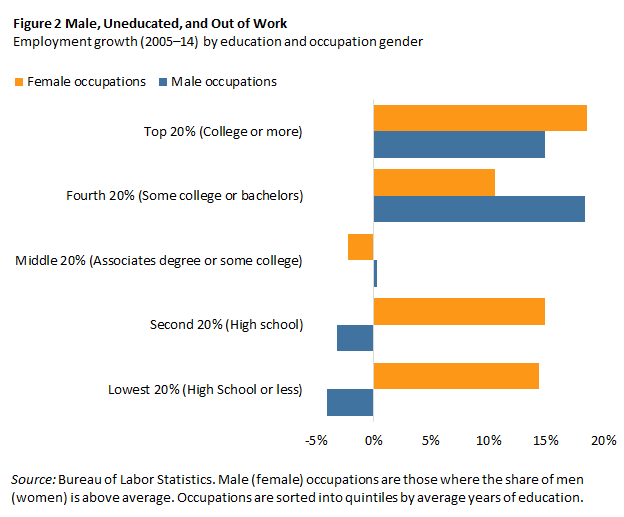 The female advantage is evident in earnings as well. Although women's occupations pay less on average at all levels of education, they are catching up. Since 2005, average incomes in female jobs have grown nearly 15 percent more than in male jobs—meaning that, for example, a nurse's income has grown faster than a carpenter's. Men are doing better only in fast-growing areas—such as engineering, computers, and finance—that require some college or a bachelor's degree. At this level of education, men's average pay was already more than 50 percent higher than women's and is growing faster, too.

Congress and the president need to craft an education budget that recognizes the size and implications of the structural shift away from the hand to the mind.

These employment trends illustrate the importance of education in helping men left out or left behind by the shift toward "mind" jobs. Yet President Trump’s budget proposal calls for a 13.5 percent cut to the Department of Education, even though he won the election in large part on a promise to deliver jobs to these people. This is absolutely the wrong direction in an economy run by "minds." Any efforts to bring back the "hands" jobs with trade policy or desperate attempts to keep production plants from relocating abroad will surely fail.

Employment for uneducated men isn't coming back. Of the 3.5 million US truck drivers whose jobs are at risk of being automated, 95 percent are men. This means they will increasingly have to compete with women in occupations requiring more personal interaction—an area where they haven't made much progress. Historically, jobs that are mostly male or mostly female have tended to remain that way.

Congress and the president need to craft an education budget that recognizes the size and implications of the structural shift away from the hand to the mind—a trend no less significant than the industrial revolution of the 18th and 19th centuries. This means a budget that invests in better and more inclusive education in science, technology, engineering, and math. The "tech titans" who gathered last month at the White House recognize this skills deficit, and called for coding in every public school. Goods and services are becoming smarter, and education and training need to keep up. It's the only way to give men a chance, to help women close the remaining wage gap, and to ensure good jobs for a wider swath of the population.