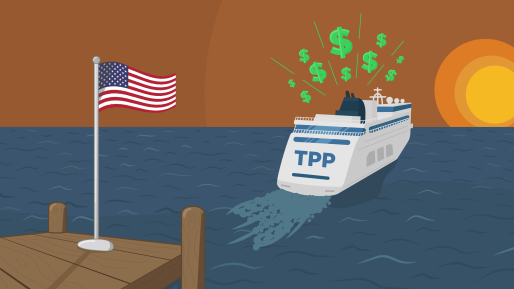 President Trump withdrew from the Trans-Pacific Partnership (TPP) on his first day in office and called it a "ridiculous" trade deal that deserved to die. But when Trump travels to Asia in early November, visits five countries and meets 20 regional leaders at the Asia Pacific Economic Cooperation (APEC) Summit, he will find the pact alive and well.

The remaining members are working to conclude the agreement on their own. In fact, this and other trade deals in the works could leave the United States regretting that potentially costly day in January.

The region does not want the United States to disengage, but it does have options. These include three major regional projects now gaining momentum without US involvement. Large, dynamic economies are involved in them, including China, India, and Japan.

The members of these projects account for half of the world's population and one-third of its output. These countries are not seeking partners "on the rebound," but see real benefits from deep economic ties with each other.

The first project is the TPP-11, a negotiation to conclude the TPP by the 11 countries remaining in the accord after the United States left. They have met several times recently and may announce an agreement in principle in November, perhaps during Trump's visit.

We estimate that a TPP-11 agreement could generate income gains of $147 billion annually from increased trade and investment by 2030. Add five more economies—Indonesia, Korea, the Philippines, Taiwan, and Thailand, all of which have expressed interest—and total gains would rival that of the original TPP.

The second project is the Regional Comprehensive Economic Partnership (RCEP), a trade agreement that would cover 16 Asian countries, including China, India, and Japan. This group never included the United States, but spurred by China, it has gained energy.

It too may announce progress soon. The RCEP is likely to have fewer and weaker provisions than the TPP, but given its sheer size, it would still generate $286 billion in annual gains.

The third project includes the Asian Infrastructure Investment Bank and the Belt and Road Initiative, both led by China. These envision massive rail, road, shipping, and energy investments to connect China with Europe and territories along the way.

These initiatives are hugely complex politically and economically, but should they work, they would create vast investments and production systems with minimal participation by US companies.

Costs for the United States

The effects of these projects, though hard to predict, are likely to be negative for the United States. The original TPP was expected to increase US incomes by $131 billion annually by 2030; that won't happen. Gone too would be rules to level the international playing field that US negotiators fought hard to build into the TPP.

For example, the TPP-11 countries have already shelved intellectual property protection that America's world-leading pharmaceutical industry considered essential. Potential US exports of beef, pork, dairy, and grains would shift to competitors like Australia and Canada. Financial, consulting, and communications service exports, seen as important wins under the TPP, will go to other countries.

Trade projects in the Asia Pacific could transform the US from the biggest winner in the TPP into a loser, with income declines up to $6 billion per year.

Overall, these projects could transform the United States from the biggest winner in the TPP into a loser, with income declines up to $6 billion per year. These losses could be offset if the United States negotiated a new bilateral trade agreement with Japan, but Japan has refused to discuss it so far. In any case, such a narrow deal would do little to connect US firms to regional production chains.

Finally, Europe may step into the vacuum left by the United States. It has already concluded bilateral free trade agreements with seven countries in the region, including US partners such as Canada, Korea, and Mexico, and has negotiations underway with six others, including India and Japan.

How should the United States respond?

The United States needs to get back in the game. At the 2017 APEC Summit, President Trump should reaffirm US commitment to the Asia Pacific. He should leave no doubt that US companies will remain competitive in this marketplace.

The Asia Pacific offers a rare congruity of US economic and strategic interests. By 2030, the region will produce half of world output, operate the most powerful militaries after the United States, and employ most of the world's high-tech talent and low-cost labor. Letting links between Asia and the United States decay would be an historic mistake.

Asia-Pacific Perspectives on the Future of the World Trade System