The Tantalizing Promise of the Next Indian Election

The spectacle that is Indian democracy-that justly mined source of India's soft power-will be on full display in the next two months. And one question will be insistently asked: Will the outcome lead to better policies, especially economic policies? Answers to this question will focus on the immediate future: on the fortunes of the Congress and BJP, the potential of the Third Front, possible coalitions, the drawing power of various politicians such as Mayawati, and so on.

But this election may turn out to be important less for these proximate outcomes than perhaps for what it signals about the democratic process itself. There is just a tiny sliver of possibility that this election, especially at the level of the states, may signal a turnaround in the deep failings of Indian democracy, raising hope for better economic policies in the future. How so?

The sustaining fiction or rather delusion in all this, of course, is that somehow the incentives created by this once-in-every-five-years exercise of people power will be strong and positive enough to deliver some of the benefits of ongoing accountability in the form of better public institutions: a less-corrupt political process, a more-effective and less-tardy system of justice, a more-responsive bureaucracy, etc.

But the distinctively Indian phenomenon of anti-incumbency in politics raised doubts even for this objective of episodic accountability. After all, how can a system be considered as appropriately incentivized if the incumbents are thrown out routinely, regardless of their performance (leaving aside the important exception of the overthrow of Mrs. Gandhi in 1977)? Indeed, anti-incumbency did not just deincentivize politics, it actually created perverse incentives. If electoral failure is guaranteed, looting overwhelming dominates delivering essential services as a governing strategy.

In an insightful recent piece, Pratap Bhanu Mehta has drawn attention to the possibility that anti-incumbency may be losing its iron grip on Indian politics and attenuating the disconnect between performance in office and subsequent performance in the polls (notable recent examples here include Narendra Modi in Gujarat, Sheila Dixit in Delhi, and Naveen Patnaik in Orissa).

To some extent this ought to have been a corollary of economic decentralization. Indeed, in a paper that I cowrote (Chapter 2 of my recent book, India's Turn: Understanding the Economic Transformation, we found strong evidence that beginning in the 1980s, and especially in the 1990s, state-level economic growth was more strongly correlated with state-level institutions and policies in a way that was not true before the 1980s. The chart from that paper illustrates this strong correlation, where state-level institutions are proxied by the transmission and distribution losses of state electricity boards. 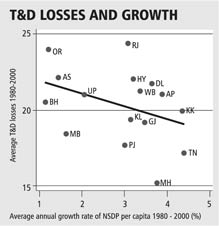 This correlation provided some basis for being optimistic about politics. Good policies deliver good economic outcomes, which provides an opening for opportunistic politicians. One political economy question was, of course, whether voters could trace the causation from good economic outcomes to the "policies" of, and hence give credit to, governments. Pratap Mehta's new argument is that this attribution is easier for voters when the coinage of politics is "money," and indeed the 2003-08 boom in the revenues of state governments allowed good leaders to use this coinage to good effect. But the reelections of Modi, Dixit, and Patnaik suggested that voters could see and trace the benefits not just of fiscal spending but of good governance more broadly.

There is good news then for a politically decentralized India. It is not essential that there be such responsive politics all across India and all at the same time. It is sufficient that there are a few visibly successful experiments, allowing demonstration effects and the competition-between-states dynamic, which are the keys to India's long-run development, to facilitate their spread throughout India.

Not just for broad governance but in relation to specific sectors too, there is promising experimentation going on. Take the case of the last and impregnable bastion of the license raj: higher education. Reforms flowing down from Delhi seem unlikely. But enough states are creating enough of a policy framework to allow progress to be made in improving higher education. One promising prospect is the Vedanta-financed university that is in the works in Orissa, which, if successful, could prove to be a model that elicits rapid emulation.

An important policy implication follows for the Thirteenth Finance Commission. Successive commissions have struggled to balance the competing objectives of equity (giving more fiscal resources to the poorer states) and efficiency (linking resources to performance to strengthen the incentives for good governance). If India's long-run economic future is indeed going to be strengthened by the twin processes of political decentralization and more-responsive state politics, the Commission should, on balance, err on the side of greater fiscal devolution. This not only means favoring the efficiency objective over the equity objective at the margin when it comes to sharing the pooled fiscal resources. It also means ensuring that a greater share of resources is raised in the states themselves than at the center so that there is less to redistribute.

As the election results start trickling in, the eyes of India and the world will be on who will occupy power in Delhi. But India's long-run economic future may well hinge on what happens in the states. The greater the signs that voters renounce anti-incumbency and distinguish between good incumbency and bad incumbency, the more reasons to rejoice: not just for the well-conducted ritual, for the "sheer romance" of Indian democracy, but for its substantive future and hitherto elusive promise.