Sorry, But This Is No Entrepreneurial Revolution

This is not a new entrepreneurial revolution, sorry. Death rates are down but the vast proportion of these new firms are probably on life support. We have absolutely no idea how well any of the owners of these firms are actually doing.

The evidence is growing that the United Kingdom is slowing.

What proportion of these firms are making losses? What proportion are earning less than the minimum income tax threshold? How many will pay no tax at all in January, disappointing the HM Treasury, which had been hoping for a bonanza from all these budding entrepreneurs?

Tax receipts continue to disappoint as most of these firms are tiddly and only marginally better than unemployment or nonemployment. How many of them have any employees at all? How many are owned by women and how many are owned by the recent crop of migrants from Eastern Europe? Presumably quite a lot, given that about a third of the recent increase in employment has been from the ten accession countries. 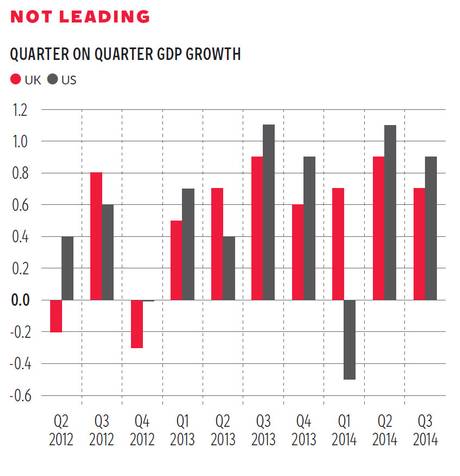 I have no clue at all how any of these new firms are doing financially, but my best assumption is not well. We know from the ONS that the real earnings of the self-employed over this period fell by around 12 percent. Chances are also that none of these new firms are sampled for the National Statistic on wages and earnings, the upward-biased Average Weekly Earnings (AWE).

What are the prospects that any of the new firms has more than 20 employees and hence has been sampled in the last couple of years? Not high. Even if they do have 20 employees, they may well not even be in the sampling frame from which the ONS picks its sample, as it takes time to identify new firms.

These new firms are either too young or too small to get into the nonrandom survey—the Monthly Survey of Wages and Earnings—used to obtain useless and biased estimates of the AWE.

Note also that despite the fact that the ONS believes the median is the most appropriate measure of wages, because it isn't influenced by outliers, an ONS spokesman told me this week that raw AWE data does not include a distribution of earnings. Due to the nature of the data collected "it is not possible to produce medians from the AWE."

Nor has the ONS had time to incorporate the 2014 findings from the Annual Survey of Hours and Earnings that I reported on last week, which showed big declines in wages in the smallest firms. But work is ongoing and will be published apparently in 2015, which almost inevitably means that the AWE in 2014 will be revised downwards. More signs there is no pickup in wages.

One of the main architects of the AWE is Martin Weale, Monetary Policy Committee hawk and member of the Irrelevant Minority, who have been voting for rate rises, apparently believing wages are about to take off. In 2008 Weale undertook a review of the AWE for the Office of National Statistics,1 building on work conducted in an earlier review that recommended setting up the AWE by Mervyn King, the former Bank of England governor. So now we know who to blame for this wage mess. Sadly nobody asked wage experts what they thought.

This statement by Weale is of particular interest in relation to what he calls "very small firms," which includes 91 percent of all firms: "It has been suggested that movements in wage rates in very small firms are likely to be more sensitive to the state of demand than are movements in larger firms. The argument is that employment in these firms expands more rapidly than in the economy as a whole in cyclical upswings and falls more rapidly in downswings. Thus leaving small firms out of the survey may lead to biases… . At some point the ONS may wish to investigate whether there is a case for including very small firms." Now is the time. Personally I would scrap the AWE and start over.

The balance of trade is worsening. Business and consumer sentiment has slowed. Living standards continue to fall even in new businesses. It should be an interesting Autumn Statement this week.