The economy doesn't do anything. It is just the sum of people and businesses and how they interact together. Construction workers build houses. Companies create jobs. Taxpayers pay for hospitals. Workers put food on the table. I am going to get the economy to take my dog for a walk, wash my clothes, do the ironing, and drive me to the office. I wonder if the economy supports Arsenal or Man United? We deserve better.

Britain is not the fastest-growing, most job-creating, deficit-reducing, of any major advanced economy.

There were more pearls of wisdom, and bucketloads of spin, half-truths, and obfuscation. "The economy … it means everything to the people of Britain. It means our security, and whether we pay our bills and provide for our families." What people can buy with their income matters, but the economy doesn't pay the bills or provide for the kids. Twaddle and drivel.

"Today I can report this to you: Britain is the fastest-growing, most job-creating, deficit-reducing … of any major advanced economy on Earth." 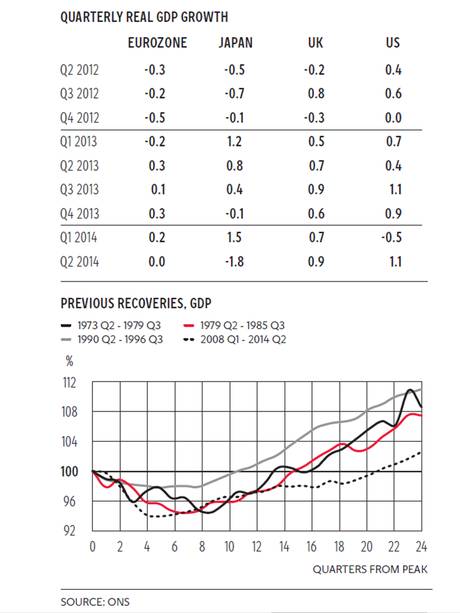 In addition, in the latest data we have available, from April to June 2014, employment in the United Kingdom fell by 34,000; in the United States, payroll employment rose by 500,000 over the same period. The US budget deficit is down 60 percent from its peak in 2009, whereas according to George Osborne, the budget deficit in the United Kingdom is "approaching half what it was when we came to office." Britain is not the fastest-growing, most job-creating, deficit-reducing, of any major advanced economy.

The latest data release from the Office for National Statistics (ONS) did revise the growth data up for the United Kingdom, as shown in the second chart, but that doesn't let Mr. Osborne off the hook. The cumulative decline in output between Q1 2008 and Q2 2009, previously estimated at 7.2 percent, now stands at 6 percent. The revisions suggest the UK economy experienced a slightly shallower contraction in output during the downturn and a slightly stronger recovery in subsequent periods, including under Labor through to May 2010. And real GDP per capita remains 1.8 percent below its starting level.

Output today is about 2.7 percent above where it was at the start of 2008, but the recovery is still the slowest in living memory. It took 21 quarters, from the start of the recession in Q1 2008, for output to be restored to its starting level.

Even though there has been a recovery in output, since May 2010 real earnings have fallen 10 percent and are currently falling at a 1.8 percent annual rate. Fashionable, maybe, but also right, I would say. I see no fallacy, dangerous or otherwise.

Then there was all the stuff that assumed that the poor work harder if you pay them less and the rich work harder if you pay them more. Tax cuts for the rich, £25 billion in spending cuts, and a two-year freeze on welfare benefits that will hit the poorest third in society hardest. The poor don't have a nice pension pot to pass on to their heirs. The disabled and pensioners and anyone who might vote Tory are excluded from any pain. The public-sector pay freeze is to be extended through 2017.

"Let's abolish long-term youth unemployment altogether," says Mr. Osborne, and I concur. But giving six months for unemployed youngsters to find work or training before their jobseekers' allowance is withdrawn won't do it.

Mr. Osborne appears to assume that unemployment is voluntary, despite evidence to the contrary, for the young and the old. Data published by the ONS last week on well-being makes this clear. Respondents were asked how happy they were, on a scale of one to 10, with 10 being the happiest. The patterns in the data are well-known in the literature: The unemployed are really unhappy. If they chose to be unemployed, you would have thought they would be happy. On average the happiness score is 7.4. Full-time employees, students, the retired, and homemakers all have scores of 7.4 or higher. The disabled score 5.7 and the temporarily sick score 6. Part-timers who don't want a full-time job score 7.6, but the under-employed, who are part-time and want a full-time job, score 7.2, and the unemployed score 6.9. The army of the unemployed is a conscript army, not a volunteer army.