A Recovery Driven by Manufacturing? It's Not Happening, George

I was in the United States at a conference last week with the chief economist at Citibank and the former MPC external member Willem Buiter, who has long been my hero: In March 1999 he became the only person who ever voted for a cut not divisible by 25—the records show he voted to cut by 40 basis points!

For years I had wanted to ask him why 40, rather than 39 or 41 for that matter—it looked like false precision. He explained to me, charitably, that the Bank of England had transcribed wrongly what he voted for. He had wanted to split the difference between those voting for 25 basis points and those discussing a 50-point cut, so he decided to split the difference at 37.5 basis points, and they rounded it up. Now it all makes sense. An important footnote for the economic historians.

Evidence that the UK economy is potentially at another downward turning point continues to come in thick and fast.

Somewhat surprisingly, we agreed on most stuff, especially about the UK economy. The one thing we differed on was when the first rate rise will come—he thinks early in 2015, I think later, not least because the UK economy seems to be slowing and inflation is sliding. I just think there is more labor market slack than he does.

Last week the International Monetary Fund (IMF), in its latest World Economic Outlook, forecast that global growth would average 3.3 percent in 2014—unchanged from 2013—and rise to 3.8 percent in 2015. These forecasts are 0.1 points and 0.2 points lower than the IMF predicted in July 2014. The weaker-than-expected growth outlook for 2014, the IMF noted, "reflects setbacks to economic activity in the advanced economies during the first half of 2014, and a less optimistic outlook for several emerging market economies." In particular the IMF lowered its growth forecast for Germany by 0.5 points in 2014 and 0.2 points in 2015 to 1.4 percent and 1.5 percent, respectively. Of interest also is that the IMF has forecast that the UK economy will grow 3.2 percent in 2014 and 2.7 percent in 2015. This is a higher rate of growth than the United States in 2014 (2.2 percent) but a lower rate in than 2015 (3.1 percent).

The National Institute of Economic Research (NIESR) estimates that the UK economy has started to slow, with GDP growing 0.7 percent in the three months ending in September, after growth of 0.8 percent in the three months ending in August. According to their estimates, 75 months after the recession started the economy is 3.5 percent larger than it was at its previous peak in January 2008. In all of the 20th century recoveries, output was at least 8 percent above its starting level this far out from the start. Indeed, in the recession of 1930–34, at this point the economy was more than 12 percent larger than at the start. 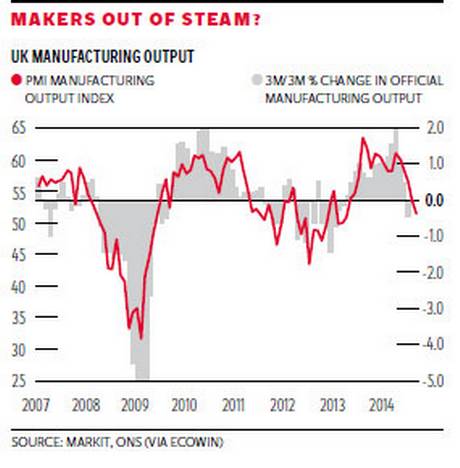 I do recall that George Osborne, in his 2011 budget speech, made growth in manufacturing output and jobs front and center in his economic strategy. "So this is our plan for growth. We want the words: 'Made in Britain', 'Created in Britain,' 'Designed in Britain,' 'Invented in Britain' to drive our nation forward. A Britain carried aloft by the march of the makers. That is how we will create jobs and support families," he said. According to the Office for National Statistics (ONS), since May 2010 private-sector employment is up by about two million, and manufacturing employment is up by 150,000. The manufacturing share of private-sector employment has fallen over the same period from 13.3 percent to 12.8 percent. Not many makers marching that I can see.

Compared with the pre-downturn GDP peak in Q1 2008, in the three months to August 2014, industrial production is 9.6 percent lower and manufacturing is 4.4 percent lower. The first chart shows the latest data from the ONS on the path of manufacturing output, measured as the three-month on three-month percentage change alongside a plot of Markit's Manufacturing Purchasing Managers' Index (PMI). The two series track each other closely, and as Chris Williamson from Markit has noted: "The growth surge enjoyed by UK manufacturing over the past year is running out of steam. Factory output growth has slowed sharply since earlier in the year, falling as producers suffer from the twin headwinds of weak economic growth in key exports markets and an appreciating exchange rate. The official data follow survey data showing a further weakening evident in September. The Markit/CIPS Manufacturing PMI fell to a 17-month low."

Evidence that the UK economy is potentially at another downward turning point continues to come in thick and fast. Net trade is still detracting from growth. In July 2014 the trade in goods deficit widened by £800 million compared with June 2014. The EU business and consumer confidence surveys as well as the UK labor market turned down three months ago. Real wages continue to plunge. The housing market has started slowing; mortgage approvals are down and surveys from both the Royal Institution of Chartered Surveyors and the Halifax suggest house price growth slowed significantly in August. Inflation is falling; commodity prices and oil prices are down significantly since the spring. Producer prices in the United Kingdom fell 0.3 percent in August. We need to see if this slowing is a temporary blip or not. I am listening for the sound of marching, charging feet, but all I hear are those wolves crying. I see no sign of any inflation anywhere.

EU Endorsement of the IFRS 9 Standard on Financial Instruments Accounting

Toward a European Migration and Mobility Union