Reasons to Be Concerned by the Rise of Self-Employment

Since the Coalition took office in May 2010 the number of those self-employed is up, in the most recent data for August 2014, by around 570,000. That's a 14.2 percent increase, compared to a rise of 4.3 percent in the number of employees.

Self-employment conveys considerable risks, not least when there is a large amount of labor market slack.

Self-employment conveys considerable risks, not least when there is a large amount of labor market slack. Of people who were self-employed in 2009, 23 percent were no longer so in 2014. There is some evidence that when the self-employed fail, as many do, they lose their jobs, their houses that they used to finance their work, and sometimes even their marriages. Around half of employees say they want to be self-employed; fortunately, most don't take the leap.

The first chart shows a rise in the SER in the early 1990s, then a drop through 2001, and then a steady upward path since then, with an especially steep path in 2013 with some recent slowing. It appears that the peak number of self-employed may have been passed. There were 4,608,000 in May 2014 compared to 4,520,000 in August. The chart also plots the unemployment rate on the right-hand axis, and it is clear the two series are strongly and positively correlated.

There is, though, another kind of self-employment. In good times, when unemployment rates are low, employees realize there are opportunities out there to strike out on their own. They have been pulled rather than pushed. The new self-employed are disproportionately likely to say they are underemployed, desiring more hours. They are hours-constrained. Recently, push seems to have dominated pull.

The question is whether that implies there has been a burst of entrepreneurial spirit or not. I suspect not. Interestingly, a declining SER is generally better, as it is an indicator of development. Poor countries have high self-employment rates, especially in agriculture, and as a country becomes less rural and more advanced, the SER declines. Mexico has an SER of one third; Chile's is a quarter. The second chart shows for 2013 the countries with the highest self-employment rates are, in order: Greece (37 percent), Italy (25 percent), Portugal (22 percent), Spain (17 percent), and Ireland followed by the United Kingdom (14 percent).

Self-employment is predominantly, but not exclusively, a male phenomenon, being especially important in construction, which has seen a big decline in its numbers, as the sector has still not recovered to prerecession levels. The SER rises with age, and the number of over-65-year-olds who are self-employed has more than doubled in the past five years. The SER is higher among whites than other groups, with the exception of Pakistanis, who have especially high rates. Blacks have relatively low rates. Self-employment tends to be higher if the individual comes from a family where others are self-employed. 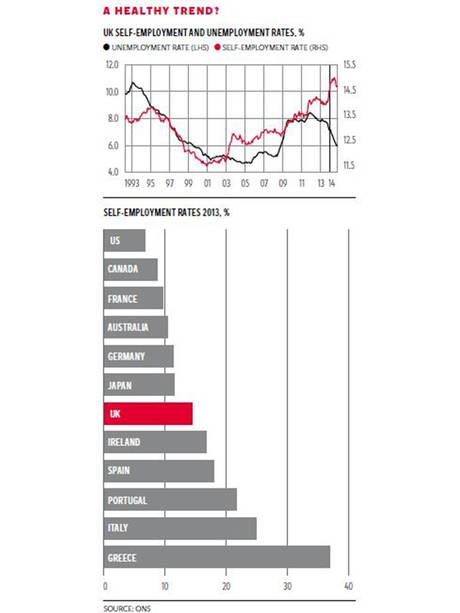 Workers in education and the health sector are frequently self-employed as a second job. Sometimes it is hard to work out which is the prime job, as some workers, including some academics, earn more from their self-employed (second) jobs than in their employee (first) jobs.

In work I have done with Andrew Oswald1 we find little evidence that you can predict who is going to be self-employed based on childhood characteristics. It is hard to predict who will be a pop star or another Richard Branson at age 11. They don't appear to be more risk-prone when they are young. It is important to do this by looking at childhood characteristics before entry into the labor market, so we can distinguish what is learned from what is inherited. We do find that capital constraints bind, which means the credit crunch has likely had a major impact on the returns to self-employment and survival rates. Lending to small- and medium-sized enterprises continues to fall, making it especially hard for the self-employed to prosper.

Evidence from the Family Resources Survey suggests that the self-employed saw a very large real fall in their median earnings in 2012–13 of 12 percent and are down a whopping 22 percent since 2008–09.

The self-employed are excluded from all three of the main earnings measures published by the Office for National Statistics. This needs to change so we can closely monitor how they are doing. My best guess is: badly.

A rise in the numbers of self-employed by half a million doesn't mean the United Kingdom has become more entrepreneurial. As I found in a 2004 research paper2, more self-employment does not seem to be better.