Gold has been all over the news in India lately because high and rising imports of the shiny stuff led directly to a deterioration of the current account, which in turn exacerbated the rupee's vulnerability over the past few months. 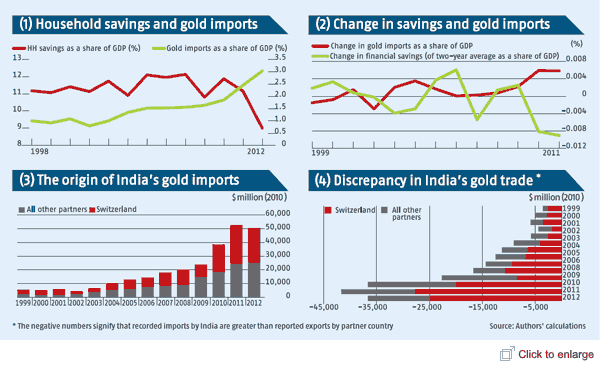 There are benign and sinister explanations—not mutually exclusive—for these facts. Consider first the benign ones. As India started growing rapidly in the early 2000s, Indians sought an attractive and safe store of wealth (helped no doubt by a long-standing cultural affinity for the yellow metal). Around 2003, the world price of gold started climbing, rendering gold an attractive investment asset. After 2007, domestic inflation started soaring, rendering gold a safe store of value, relative to domestic bank deposits. These explain the decline in domestic financial savings, moderate at first but accelerating after 2007, and the associated increase in gold imports (figures 1 and 2).

Since the rising demand reflected in large part a demand for savings and wealth (rather than a desire for consumption goods such as jewelry, as noted in the last Economic Survey of the finance ministry), it got expressed in increased imports of gold bars (ingots). And since Switzerland is one of the largest exporters of such high-quality and certified ingots, imports had to be to a great extent from Switzerland rather than from other sources (figure 3). And since Switzerland chooses not to report its exports of gold on a country-by-country basis, the discrepancy in recorded Indian imports is easily explained (figure 4).

The conclusion? India "just" has to bring inflation under control and restore macroeconomic order, which, combined with a providential stabilization of gold prices, will then allow the country to move beyond its gold fetish and its destabilizing consequences.

But sinister explanations come in the way of that rush to comfort. And in an era of eye-popping scams and massive wealth creation, due vigilance and diligence are the need of the hour. It is no secret that the go-go years of the 2000s also created substantial ill-begotten wealth. With banks starting to toughen regulations and implementing more stringent know-your-customer (KYC) rules (since the mid-2000s), rich and corrupt Indians exited from the regulated banking system to gold as a "safe haven"—"safe," that is, from the authorities. Hence the rise in imports, which was, in part, the counterpart of the decline in financial savings (figure 1).

But suppose these Indians also wanted to stash some of their wealth overseas, especially in tax havens such as Switzerland, how would they do so? One possibility is by over-invoicing imports from Switzerland. Importers could claim that they imported gold worth $100 from Switzerland while in fact only buying gold worth $50, with the difference finding its way to Swiss bank accounts prized for their lack of transparency (hence the numbers in figures 3 and 4).

According to media reports from last June, Switzerland ranked first among the major countries to which India dispatched its secret tax and finance-related queries (232 in all) during the last fiscal year. In contrast, the authorities sent "only" 145 such requests to Mauritius. The gold trade channel, then, offers a convenient way of repatriating wealth to the tax haven, which also happens to be the source of imports. This channel is not only convenient, it is also "legitimate," at least in the limited sense that payments can be made through the banking system for prima facie legal (namely trade) purposes.

Of course, there is deceit in the underlying transaction, which must be facilitated or condoned. Note that capital flight cannot work if customs officials are honest and their procedures effective. They can verify the quantities and values of gold that importers declare and match them against banking documentation relating to the payment for imports. Hence, the sinister explanation requires some degree of incompetence or complicity of customs officials in capital flight.

Are they? We can never tell; but, as economic researchers, there is one—albeit indirect and imperfect—way of checking. We can exploit the insight in Robert Solow's famous saying that in economics there is only one law: "Every purchase is a sale and every sale is a purchase." In the trade context, every import is an export and vice versa. We can try and match at a very disaggregated level (and by partner country) what is being reported at the Indian end as imports with what is being recorded as exports at the partner end.

But here's the zinger. Swiss law, as it currently stands, does not require Switzerland to publish details of its gold trade. In 1981, under pressure from leading Swiss banks, Switzerland stopped publishing detailed statistics on monthly imports and exports of gold bars. The country's three largest banks complained to the authorities that country-level reporting was harming business, since it removed the veil of anonymity. Some have suggested that the underlying motivation was linked to the Swiss role in facilitating the gold trade involving South Africa, then under apartheid. Given the collapse of apartheid long ago, what is the rationale today for this norm? Mysteriously, Switzerland publishes detailed data on a lot of its trade—but not gold bars.

The international community has made great strides towards transparency in relation to anti-money laundering and to tax evasion. Especially on the latter, Switzerland has been responsive to prodding by the United States and other rich nations. It is time to extend transparency to areas of concern to developing nations, which are struggling to improve governance and reduce corruption. Switzerland could help in this endeavor by publishing details of its gold trade. To be clear, we have no interest in conspiracy theories and stand ready to accept the benign interpretations for these facts. Yet, given the massive capital flows at play (and the shenanigans we have become inured to), Indians deserve assurances that all is, in fact, above board. Unraveling the mystery of India's gold fetish could well be in the hands of the bureaucrats of Berne. The clarion call from developing countries to Switzerland should be: "Publish or we perish."

What the Prime Minister of India Can Do about Corruption

Slave to the Blog: The Notable and Quotable Edition