This is the first of a two-part series; see also India: Land-Shackled II.

Capital, labor, or land? Which of these is the binding constraint is one diagnostic question India's new government should be asking itself as it seeks to revive the sputtering Indian growth engine.

We ignore public institutions—a manifest binding constraint—because the issues they raise are too complex to be addressed here. With that caveat, we would assert that capital is not the binding development constraint today. Yes, there are multiple challenges. But considerable progress has been made. India is awash with domestic savings even if the government is preempting them at the expense of the private sector; there is virtually free access to foreign capital.

Generous geography has ensured that India is not landlocked. Poor public policy should not make India land-shackled either.

Labor markets are a serious problem, reflected in the poor performance of labor-intensive manufacturing. The panoply of Indian laws and regulations, as well as the culture and the practices of the inspector raj, have made the use of unskilled labor very difficult. And the shambolic education system constrains the supply of skilled labor.

But with labor, at least there are ways around these problems. Business can use contract labor, shift to services, or resort to capital and technology-intensive methods of production. And above all, labor can move (at least to some extent) within India.

Make no mistake. All such circumvention is costly and a drain on development. But with land, immobile and fixed, even these options are not easily available. Land markets are arguably the most distorted factor markets in India. Its issues are at the heart of India's most pressing challenges from governance to growth, education to manufacturing, taxation to urbanization, and environment to energy. 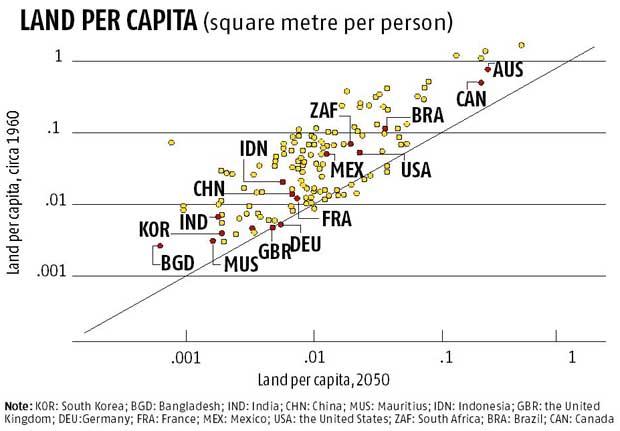 In the figure, we plot the land-to-population ratios for some major countries. These ratios are shown for 1960 (on the y-axis) and 2050 (on the x-axis), the latter using the United Nations population projections. Virtually all the points are to the left of the 45-degree line—showing that, over time, population growth has increased the pressure on land all around the world.

India was land-scarce relative to most countries in 1960. However, by 2050, its land-to-population ratio will have declined fourfold, and India will be amongst the most land-scarce countries in the world (there are only a handful of countries to the left of India, including Bangladesh, Mauritius, and the Netherlands). China in 2050 will have nearly four times as much land per person as India and Brazil nearly 20 times as much. This is not surprising. Consider, for example, that just between 1991 and 2011 India added more people than its entire population at the time of independence, or more people than the entire population of the United States— in one-third of the land area.

But this problem of diminishing physical supply will be aggravated by endogenous economic forces. If India grows at about 78 percent over the next two decades, the demand for land—for commercial and industrial purposes, housing, and infrastructure—will rise sharply, quite apart from the pressures of adding another 200-million-odd people. The irony will be that the more prosperous India becomes, the more serious the problem of relative land scarcity will be. In other words, India must plan as much for the contingency of success as failure.

This rising relative scarcity of land has three major implications for development.

First, the cost of land as a factor of production will rise sharply, rendering all land-intensive activities, including manufacturing, less competitive. Indeed, one of us has argued that land could well be a factor contributing to high and persistent inflation.

Second, land scarcity will increase the rents from land ("terrestrial rents," which are distinct from rising legal costs of land). An iron law of development, to paraphrase Lord Acton, is that rents corrupt economic and political institutions and large rents destroy them. Land-related scams, scandals, and scoundrels have severely distorted India's political economy.

Third, an argument made by Chang-Tai Hsieh of the University of Chicago is that distorted land markets, especially urban ones, can fundamentally stymie the economic convergence process by rendering labor less mobile. A big part of economic growth occurs from the structural transformation of an economy as labor moves from low-productivity rural to higher-productivity urban activities. India's distorted land markets have stymied urbanization, lowered rural-to-urban migration, and locked in large parts of the population in low-productivity rural jobs. Urbanization under these conditions will be more wretched sprawl than glittering high-rise.

Distorted land markets could be a possible explanation of two puzzling and related phenomena in India that one of us has written about, "premature deindustrialization," whereby even the poorest Indian states have moved away from low levels of manufacturing very early in the development process, and the coexistence of undervalued exchange rates and a weak manufacturing sector suggests that structural impediments—including land—prevent the flow of resources into manufacturing despite apparently favorable price signals. And recent legislation has only compounded these problems.

The problems of India's land acquisition laws are well known. The animating vision underlying the Raj's 1894 law was: "The state must be allowed to acquire land as cheaply as possible; after all these native landlords are themselves exploiters." The post-Independence Indian state used this law to acquire vast amounts of land for "public purpose," often from marginalized tribal communities and offering scant compensation.

It compounded this by a tragically flawed approach towards urbanization, of which rent control was one of the more obvious examples of high principles being laid low by banal realities. Intended to protect the urban middle class, rent control has in fact reduced supply and prevented the emergence of a modern rental housing market: Existing houses are often left vacant (for fear of being unable to increase rents or change tenants) and the corporate sector is discouraged from building apartments for rent. This hurts the poor and the lower middle class, who are often at the mercy of grey-market landlords with the physical and financial muscle to evict tenants.

In 2013, the United Progressive Alliance government passed a new bill that in turn was animated by the following vision: "The state can and must protect the weak landowner against rapacious private-sector land acquirers." This vision had two main weaknesses. In sharply raising the procedural hurdles in acquiring land, it forgot the most basic lesson of public policy in India: Complexity is a guarantee of agonizingly long delays and, often, implementation failures. At a minimum, lengthening implementation lags will sharply increase project costs, which will feed into the rest of the economy.

Second, the vision was simple-minded and undiscriminating. It assumed that all cases were of the sort where weak, defenseless, and illiterate Odia tribals deal with a Vedanta-like giant multinational.

But as in most things, India is not only complex but evolving. The exploitation of the weak is undoubtedly important. But increasingly, the problem is as much the relatively urban well-to-do ripping off the state through exaggerated court awards. The cost of the law has been to strengthen the hands of private landlords against a state that is already weak and now further burdened with overly complex procedures.

What needs to be done? That is the subject of our next column. But the key message is that land-related issues need to move to the forefront of India's policy agenda. India must mount nothing short of a war effort to address what is becoming a binding constraint on India's development. Generous geography has ensured that India is not landlocked. Poor public policy should not make India land-shackled either.