How do large-scale economic and political transformations, such as the collapse of communism in the former Soviet bloc, affect perceived welfare? In a new working paper, we show that income gains in the post-communist region have failed to translate into convergence in life satisfaction.

This happiness gap holds even after accounting for a variety of factors, such as the log of per capita income, life expectancy, and Eastern Orthodox religion.

Although scholars have acknowledged that transition has been an unhappy process, the expectation was that economic and political reform would eventually be rewarded. This prophecy has not come true yet. For example, Ukraine and Russia are consistently found near the bottom of rankings of life satisfaction, with scores lower than those of countries like Bangladesh and Senegal. Armenians, Bulgarians, Georgians, Moldovans, and Serbians are less happy than Peruvians and Indians. Hungarians are less happy than Kosovars and Mongolians. Why, then, as economic advancements are materializing for most countries, are the psychological benefits lagging behind?

Our analyses confirm that post-communist economies are systematically unhappier than their advanced and developing counterparts in the rest of the world. This happiness gap holds even after accounting for a variety of factors, such as the log of per capita income, life expectancy, and Eastern Orthodox religion. In fact, we find that the income-satisfaction gradient is similar for transition and non-transition countries. Moreover, while the happiness gap did narrow somewhat between 1990 and the early 2000s, it has stayed remarkably persistent throughout much of the transition period. 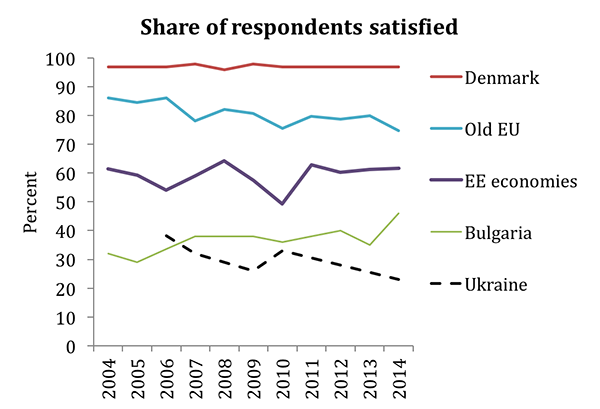 Sources: Pew Research, Eurobarometer and Life in Transition Survey. Each survey is only included if it is available in the given year. Countries can appear in multiple surveys in the same year when the EE and Old EU aggregates are calculated.

Our explanation focuses on the importance of perceived corruption and government performance for life satisfaction in eastern Europe. Accounting for political corruption and quality of governance eliminates the gap in subjective well-being completely in our cross-country analyses, while including variables capturing government performance and the importance of political connections and breaking the law reduces it substantially when we look at individual-level data.

At the same time, we find that perceived corruption in various public services has little effect on life satisfaction both in our cross-country and individual-level regressions. These findings suggest that while eastern Europeans may tolerate petty bribery, they are dissatisfied with government efficiency and political corruption. The early hopes were disappointed: East Europeans expected that the quality of government would improve thanks to electoral freedom, but progress has been slow in this area.

We also find that the Eastern Orthodox religion explains around 30 percent of the happiness gap. This suggests that large-scale economic and political changes may be particularly salient for declining life satisfaction in countries with a large Eastern Orthodox population, including Belarus, Bulgaria, Georgia, Macedonia, Moldova, Montenegro, Romania, Russia, Serbia, and Ukraine, as well as Cyprus and Greece.

Our results have several implications for reformers in eastern Europe and beyond. First, large-scale societal transformations may bring both economic advances (for some) and long-term psychological costs (for many). Furthermore, dissatisfaction with life may produce reform fatigue, thus threatening the stability of new and vulnerable economic and political institutions. Above all, our results highlight that bribery and poor government performance may have long-term intangible costs that not only transcend a simple economic calculus but also profoundly affect people's everyday lives. This suggests that the transition from central planning is still incomplete, at least in the psychology of people.

Hungary under Orbán: Can Central Planning Revive Its Economy?