On the campaign trail, presidential candidate Donald Trump often slammed American leaders for publicly telegraphing their ISIS strategy. “Whatever happened to the element of surprise, OK? We announce we’re going after Mosul,” he said during the last debate with his opponent. “I have been reading about going after Mosul now for about—how long is it, Hillary, three months? These people have all left. They’ve all left. The element of surprise.”

President Trump is now deploying the “element of surprise” in his trade war strategy—and in particular how he is imposing tariffs on China. There is no question that China poses unique challenges to the trading system that the American government must address. But the problem is with Trump’s approach—it is catching American businesses wrong-footed.

After all, the United States has long pushed the world to accept a system where protection arises after a careful government investigation into a trading partner’s adherence to globally-accepted rules. But most past investigations have begun with one common critical feature: product lists and country targets were publicized at the beginning of the trade investigation, many months before any tariffs would be imposed. This gave time for not only the public to weigh in—to potentially alter the scope of the protection—but also for businesses and workers to make contingency plans if trade barriers were ultimately enacted.

Trump’s strategy is different. For one, he is not waiting for industries to request protection. He is imposing it himself, wanted or not. But Trump is also demanding investigations under separate and little-used US trade laws that allow him greater secrecy and authority than America is used to.

Under these laws, Trump gets to decide what products and countries are hit with protection, when they are hit, and when the public is to be told the details.

Take his “Section 301” tariffs on some $50 billion of imports from China. While Trump triggered the legal investigation behind the China case in August 2017, the first 1,333 products that he plans to hit with tariffs weren’t publicly revealed until April 3. And only two days later, Trump instructed his trade representative to come up with a supplemental set of products—covering an additional $100 billion of imports from China—to strike with yet more tariffs. All of these restrictions could be imposed as early as May.

Trump’s recently imposed tariffs on steel and aluminum are another example. He triggered investigations in April 2017, yet the exact “steel” and “aluminum” products on his tariff list weren’t made public until mid-February 2018. And the foreign sources that Trump ultimately punished with tariffs—including military allies such as Japan, Taiwan, and Turkey—were finalized less than 12 hours before the tariffs went into effect in March. In a world of just-in-time production, this was well after the cargo ships had left the foreign port.

Trump’s decision to keep such information close to the vest may be deliberate. A short turnaround between product announcement and tariffs means countervailing political forces have little time to mobilize.

But it is also counterproductive. It means businesses operating in the United States have much less time to mitigate the tariffs’ negative impacts. And lengthy supply chains mean many American companies will only discover the hard way their costs have gone up.

Just take a look at the hit-list of 1,333 products subject to Trump’s Section 301 tariffs. Visibly striking is that it includes howitzers, grenade launchers, helicopters, satellites, and spacecraft—which conjures up a frightening image about trade with Beijing. But that was a bit of tariff subterfuge; an investigation of the data reveals the United States imported zero of that military equipment from China in 2017, despite their making the list.

One out of every five tariffs that Trump selected involved a product with the word “parts” in its description.

Hidden in plain sight on the list was something much more economically frightening. One out of every five tariffs that he selected involved a product with the word “parts” in its description. Most were so technical that even trade experts had no idea what they were, except to know that businesses and workers rely on those “parts” from China to remain competitive in the global marketplace.

Most of those types of products go into something bigger and better being made by Americans. And especially for those on the list, the imports from China are nowhere near zero. I classified all 1,333 products and found that intermediate inputs and capital equipment comprise almost 85 percent of the $50 billion of imports subject to Trump’s tariffs. 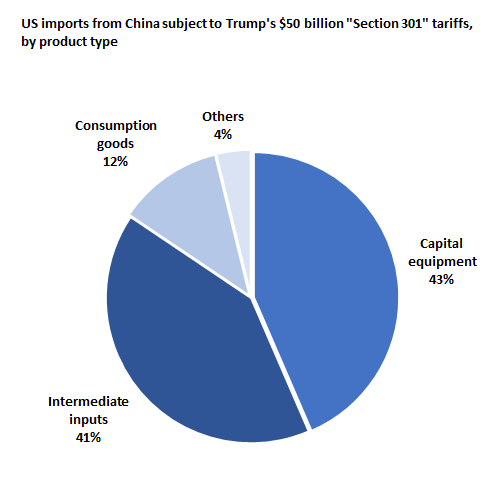 Regardless of how much warning US companies are getting, Trump’s decision to impose restrictions on intermediate inputs and capital equipment is a step backward. It goes against decades of government work to lower trade barriers so Americans have easy access to low-cost, high-quality components. This is a basic competitiveness strategy for any government that wants to encourage companies to invest locally and employ more American workers to create valuable products.

Trump’s plan means American-based manufacturing and service providers will find it increasingly difficult to compete with Germany, the United Kingdom, Japan, South Korea, and throughout Asia—where tariffs on parts and equipment remain low. That would be bad enough.

Making matters worse is the administration’s “element of surprise.” That only amplifies the disruption to US businesses.

President Trump may be using this tactic to avoid political pushback. But his sneak-attack tariffs are likely to turn out an unwelcome and startling disruption for the very same American businesses and workers he claims to be trying to help.

Chad P. Bown is the Reginald Jones Senior Fellow at the Peterson Institute for International Economics and former lead economist at the World Bank. With Soumaya Keynes of the Economist, he hosts Trade Talks, a weekly podcast on the economics of international trade policy. Follow him on Twitter @ChadBown.