Dump Globalization: The Word, Not the Idea

The word globalization has literally been used to death. The term means many things to different people, and has become so tarnished by what are really debates about social and employment policies that it has become effectively useless. It’s time to get rid of it, in name if not substance.

The term had a good run and, in a broad historical context, is hardly a new phenomenon. In a sense, humankind has been globalizing at one pace or another ever since it first walked the planet. To be sure, the speed and complexity of change may have become rather exponential of late, helping to explain the discontent associated with so many of the policies – like open trade, a business-friendly regulatory environment, strong incentives for private enterprise – normally associated with the term globalization.

Steven Weisman, vice-president of publications and communications at the Peterson Institute for International Economics, has written an important book exploring some of the economic tensions arising from greater commercial integration but also seeking, and ultimately finding, a moral case for the overall benefits of such policies.

Weisman and others, however, are quick to acknowledge that talk of helping workers hurt by past trade agreements make a transition to quality alternative employment has not been matched by concrete action.

People clearly have reason to be upset, to feel cheated by the economic system. The economy just isn’t working for them.

This helps to explain some of the backlash against trade and has fueled a growing sense among economists that so-called “trade adjustment compensation” may not be enough. Instead, a more comprehensive system of retraining, business incentives, and even direct financial help in some form, perhaps for a prolonged period, may be necessary to cure the ills affecting a global economy that many believe will only grow tougher on workers as automation of many functions increases.

Adding to the widespread discontent: Lower- and middle-income workers in wealthy countries appear to have lost the most ground in terms of their living standard over the past few decades, according to research by Branko Milanovic, an economist at City University of New York. 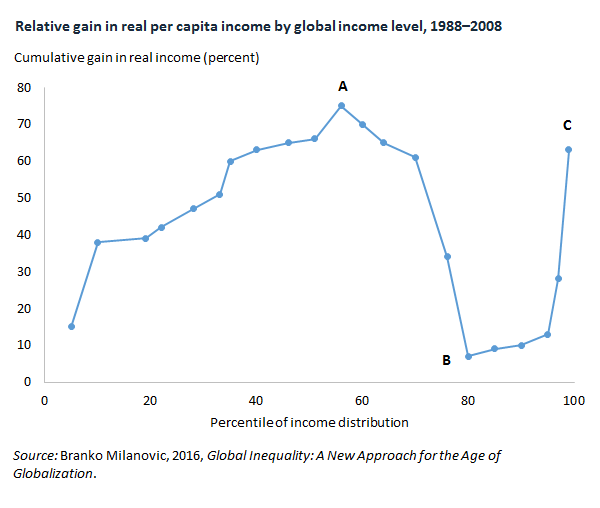 People clearly have reason to be upset, to feel cheated by the economic system. The economy just isn’t working for them.

So if globalization has become a dirty word, unduly idolized by its proponents and unfairly vilified by its detractors, what should replace it? Maybe nothing at all. If the process is so obviously inevitable, then how often must we discuss it?

Clearly the debate is about more than rising integration. It’s about the kind of world that people want to live in, and governments must grapple with all kinds of socially sensitive issues like labor market policies, social safety nets, immigration and a host of other issues. If that’s the case, perhaps it’s more advisable to focus on specific policies and in particular on outcomes rather than ideology. Different mixes of public- and private-sector involvement in the economy work better for different nations, though most can hardly be said to have achieved a consistently healthy balance.

At the same time, the process of greater integration between nations, driven in large part by technological developments, is unlikely to move into sharp reversal in the near future, even if some of the noise coming from political extremes has become particularly virulent of late.

“If globalization is to benefit most members of society, strong social-protection measures must be in place,” argued Nobel economist Joseph Stiglitz in a recent piece for Project Syndicate.

Perhaps fittingly, the term globalization was made popular by a marketing expert in the 1980s. Like so much popular culture from that era, the shelf life of that particular sales gimmick has clearly expired.

The Case for Structural Financial Deglobalization