For three decades, the predominantly prevailing presumption among economic analysts and financial authorities was that the flow of financial capital would become increasingly freer (see, for example, IMF 2000 and an earlier discussion in Calvo et al. 1994).

This underpinned advice from advanced-economy forums, such as the G-7, and international institutions, such as the International Monetary Fund (IMF), and was collectively referred to as the triumph of the "Anglo-Saxon model."

There were three flaws, however, in this intellectual edifice.

Many retained what Calvo and Reinhart (2002) termed a "fear of floating" for reasons explained in that paper. In the face of pressures that would otherwise have led to an appreciation of their home currency, those authorities intervened in the foreign exchange market, sometimes accumulating massive stocks of reserves.

Indeed, an amazing assortment of rules allowing restrictions on financial flows sits on the books of emerging-market economies. They take a variety of names: prudential reserve requirements, taxes on hot money, and stamp duties, among others. They are not always in force, but they can be in the future.

Stage for the Debate

This sets the stage for a debate at the highest levels of officialdom about the future of open capital markets. Advocates of increased regulation and direct controls have two advantages.

We will argue that global economic developments will intensify the pressure for a return of financial repression.

If this is correct, after the fact, the past 30 years will seem a quaint replay of the pre-Great-War heyday of capital mobility. Another golden age will have come and gone. The chronology of the extent of capital mobility in chapter 10 of Reinhart and Rogoff (2009) indicates that the last sustained stretch of significant restraint on global finance was immediately on the heels of World War II. Whether restrictions on finance should be mostly remembered for facilitating the rapid rebuilding of the 1950s and 1960s or ushering in the imbalances of the 1970s remains an open issue.

The Cost of Crises

Without question, financial crises are costly in real economic terms. In a paper for the recent Federal Reserve Bank of Kansas City's Jackson Hole Symposium titled "After the Fall," we looked at economic performance surrounding 15 severe financial crises in the second half of the 20th century (Reinhart and Reinhart 2010). Some of the results are presented in table 1 below, although in a different form than in the paper.

The shaded row gives average economic performance across countries in the year of the crisis. After a severe financial crisis, economies tend to go deeply into recession (column 1), recover only slowly, and settle onto a growth path lower than the average performance in the decade prior to the crisis. The unemployment rate (column 2) remains elevated. Equity prices are more coincident with the crisis and rebound relatively quickly, but real house prices continue to decline for most of the decade after the crisis.

This panel has discouraging implications for the global distribution of economic growth. The advanced economies (often referred to as the "North" in the economics literature) were the centre of the systemic financial crises. Emerging-market economies (the "South") may have fallen into recession, but they were mostly pushed by their trading partners, not pulled in by their financial institutions. If the advanced economies follow the pattern of prior recoveries from severe financial crises, they will grow only sluggishly and unemployment will stay elevated. Emerging-market economies do not share that impediment.

Figure 1 shows real GDP growth for the past 30 years in those two regions. Advanced economies (dashed line) had already been growing more slowly than emerging-market economies (solid line) for a decade. If the advanced economies do not fare better than during the aftermaths of previous systemic financial crises, then this growth gap will only widen. There are many implications of a stretched regional growth imbalance for asset flows and prices, but we will sketch out only those related to international attitudes toward capital flows and reserve accumulation. 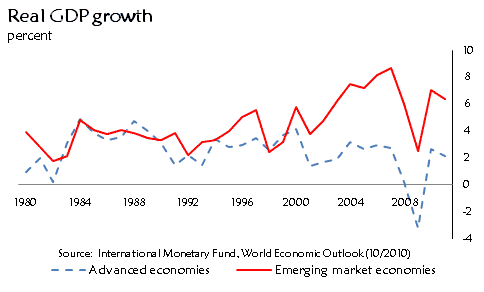 First, the deep recession and initially sluggish recovery among advanced economies has prompted unprecedented policy action. Many countries countered economic weakness with ambitious fiscal stimulus. Those plans, however, put strains on government finances that were already reeling from the direct consequences of recession and crisis, including reduced tax collection, greater spending on automatic stabilizers, and bailout costs as private mistakes became public obligations.1 As a result, fiscal deficits have been large, adding to already large debt stocks that push economies into a region associated with slower economic growth.

Monetary policy also responded vigorously, as the major central banks slashed their policy interest rates and expanded their balance sheets. In several cases, authorities pushed their central banks into hitherto unexplored territory. At the point position of that expeditionary force has been the Federal Reserve, which eased policy in a manner unprecedented in speed, size, and form.

Predictably low short-term interest rates encourage investors to seek riskier alternatives, some of which are offshore. As a consequence, many other countries are receiving windfalls of capital flows. In other work, we referred to episodes of unusually high capital inflows as "bonanzas" (Reinhart and Reinhart 2008). These inflows of capital are historically associated with pressures on the local currency to appreciate and booming domestic asset markets.

Capital inflows can be a mixed blessing, especially in economies with thin domestic financial markets and when driven by investors with a short-term focus. Often the effects in emerging-market economies are resisted. Many levers of policy can be applied to that end. One that has been widely relied upon in the past few years has been currency intervention. Many emerging-market economies, especially those around the Pacific Rim, have settled on an export-led growth strategy. Key to that appears to be keeping their bilateral exchange rate stable in relation to the dollar. But this requires them to resist currency appreciation and accumulate dollar reserves when the anchor country is mired in financial problems and keeps monetary policy accommodative in an unprecedented manner.

Emerging-market and developing economies have indeed significantly increased their reserves. According to estimates of the IMF, they added $1.9 trillion to their reserve holdings from 2008 to 2010, or about 7 3/4 percent of their nominal income over that period. A survey by the IMF, the Currency Composition of Official Foreign Exchange Reserves, indicates that about two-thirds of those reserve additions are dollar-denominated.

The timeliest reading on official reserve activity is the total value of government securities held in custody for official entities at the Federal Reserve Bank of New York. Not all reserve managers hold all their government securities at the New York Fed and some hold dollar assets that are not issued by the US Treasury or guaranteed by government agencies. Still, the held-in-custody data are reported weekly and are large-nearly $3 1/2 trillion at the last observation plotted in figure 2 below. 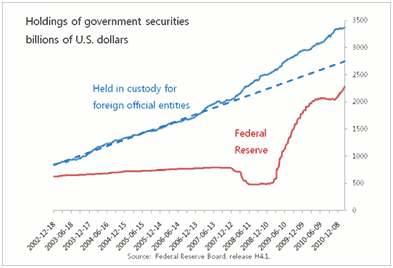 Also note that the pace of reserve additions picked up relative to the prior trend as the financial crisis heated up in 2008. Indeed, the held-in-custody account was 22 percent higher in February 2011 than the trend from end-2002 to end-2007 predicted (dashed line).

That is, policies toward capital inflows and reserve accumulation among countries in the South have come to be as important in quantitative terms as the inward-looking policies of the central banks of the North.

Meanwhile, some advanced economies will be looking to finance large deficits and to roll over large debts. In that environment, prior reticence toward capital controls and other restrictions on finance may well lift. Restrictions of finance, after all, create more captive markets.

In such a world, capital controls and other forms of financial repression will be increasingly relied upon.

This article is based on the introduction for the Spanish translation of Reinhart and Reinhart (2008b).

1. This is the focus of chapter 14 on the aftermath of financial crises in Reinhart and Rogoff (2009).

What is the “Washington Consensus?”

Are Capital Inflows Expansionary or Contractionary? Theory, Policy Implications, and Some Evidence