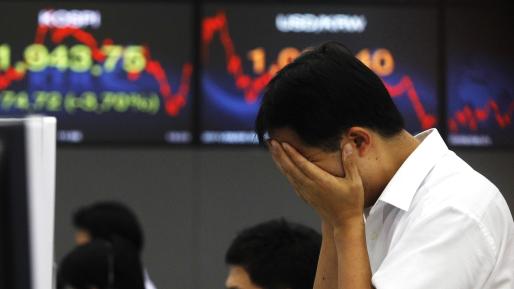 There is a moment soon after major financial crises erupt when it dawns on public officials what went wrong. They draw up ambitious plans for meaningful change but these plans are soon rolled away as the wider society adopts what I call "The Bad Apple Theory of Financial Crises."

According to this theory, crooked bankers using evil products cause financial crises. We just need to banish them. Politicians are keen proponents of the Bad Apple Theory. It shifts blame from their regulatory policies. They can show the electorate that they are swinging into action to ban stuff. Bankers like it too. They can sacrifice a few arrivistes and carry on. The media revel in the Bad Apple Theory. It lets them brush over the advertising revenues they lapped up before the crisis and the fawning copy it bought, and focus instead on bringing down those they had previously built up.

The Bad Apple Theory dominated the thinking behind the tepid initiatives at the end of the Dotcom debacle of 1999—2001, the Asian financial crisis of 1997—98, and the Latin American debt crisis of the 1980s. Not since the Great Crash of 1929 did a financial crisis lead to a complete redrawing of the financial system. Crises are more structural than a few bad apples. The dominance of the Bad Apple Theory in the popular discourse condemns us to repeat the cycle of boom-bust.

The balkanization of news providers by cable and the Internet have meant that the most common frame of reference today comes from movies. Oliver Stone's Money Never Sleeps (2010) and J. C. Chandon'sMargin Call are two of the best examples of movies about the crisis that adhere to the classical Bad Apple Theory. The version of the theory favored by politicians and bankers is generally too one-dimensional to sustain two hours of entertainment, and so the Hollywood version adds sinister conspiracy to the story of omnipotent banks defrauding ordinary people. Andrew Ross Sorkin's Too Big to Fail in 2011 is a fine example. Even in films, it is the early observations about the crisis that are more radical. Michael Moore's Capitalism a Love Story (2009) and Charles Ferguson's Inside Job (2010) convey the wider corruption of the financial industry. Michael Lewis wrote The Big Short around the same time, but Adam Mackay's film version has only been released recently. It captures the different characters at banks and hedge funds better than any other movie and has the best explanation of mortgage-backed securities. Having done the hard work, it is let down by an end which leads us to the usual suspect: criminal fraud by banks.

If before the crisis all those who committed illegal behavior had somehow been locked up and the banks had been broken up, the crisis and its untold human suffering would still have been as big. Illegal things happened, but they did so at the margins. Better enforcement of regulations would not have changed anything because regulatory incentives were the chief cause of it. The Big Short rightly hints that aspirations for a job at the banks played a role in the obsequiousness of regulators. But the main avenue of regulatory capture was the prevailing societal view from the 1980s onwards that markets were good and governments were bad. Politicians got elected to cut red tape, and banks rolled out Nobel Prize—winning economists to explain why we should leave regulation to the markets.

It was regulators themselves who, in the name of safety, created the merry-go-round where banks packaged their mortgages together into a market security that they sold to other banks and then used the proceeds to buy the packaged mortgages of other banks. Those that did were allowed to hold considerably less regulatory capital and, therefore, make more profit than those that did not. This rule came into force in 1988 when the market ideology was still ascending, and it was from that point that securitized mortgages took off.

Ten years later, regulators brought credit ratings into the assessment of the amount of capital (cash not debt) required to fund securitized mortgages and imposed disclosure on the makeup of their ratings. This information allowed banks to build packages of debt to a rating, aggressively seeking out the lowest-rated debt that once spread would preserve the rating of a security. The process destroyed the statistical independence that lay behind the ratings. Diversified packages of the small amount of subprime debt were low risk originally, but over-exploitation of this statistical observation turned them into risky assets. There was some illegality, much greed, even more foolishness, but mainly the close following of flawed regulation.

Financial booms occur when markets become convinced that some innovation has made the world a safer place. At the top of the boom, just when banks and others should be pulling back, the market assessment is that risks are small and so banks and others can safely double up on debt. Markets serve many useful purposes, but 800 years of financial folly has taught us that a collective underestimation of risks in the good times and later overestimation causes booms and busts. As long as regulators and their political masters believe that the best response to market failure is to rely more on markets, then booms and busts will keep on coming however many bankers you lock up.