The negotiations for the Trade in Services Agreement (TiSA) involving 23 members of the World Trade Organization (WTO) have made significant progress, entering into their 21st round this week. So this would be a prime time for the United States to publicly state its support for China’s inclusion, before the negotiations conclude. If China can agree to the high standards already agreed to by the current parties, then it should be brought in for the final stretch of the negotiations. Otherwise China’s participation in TiSA may be unlikely in the near term, because it would be difficult domestically to sell joining an agreement in which it had no say.

China’s participation in TiSA is in its own economic interest and ultimately the United States as well.  First, TiSA would complement and provide incentive for reforms already underway in China. Second, US service exporters would benefit significantly from liberalized trade and investment with the Chinese market, decreasing the massive US bilateral trade deficit with China, a major source of friction. Last, cooperation under TiSA, along with the conclusion of the bilateral investment treaty, would be important steps toward strengthening US-China economic relations.

TiSA, under negotiation by 23 parties including the United States and the European Union, is an international agreement on the trade of services. TiSA could affect international trade in areas like ecommerce, telecommunications, transportation, software, and financial services. Negotiations in the WTO for the further liberalization of services trade through the General Agreement on Trade in Services (GATS) has stalled, and like-minded countries and parties decided to go outside of the WTO to bypass the deadlock. The deal is being structured, however, so that if enough countries join, it can be incorporated into the GATS, making it available to all WTO members. The issues TiSA will cover include expanded market access, national treatment (treating foreign and domestic companies the same), common regulations, and transparency.

China’s economy is transitioning from being industry driven to more service oriented. In 2013, China’s service sector finally surpassed industrial output as a share of GDP, and it continues to grow. However, China is still far behind the average service share of GDP in economies in countries of the Organization for Economic and Cooperation and Development (OECD). China has been implementing policies to increase its exports in services, which reached $288 billion in 2015, though this pales in comparison with manufacturing exports, which are over $2 trillion. A number of important service industries are dominated by a few state-owned enterprises (SOEs), which appear to be holding back China’s economic growth, as SOEs are financially unsound and much less efficient than private enterprises.

Currently, China’s service trade barriers are much higher than OECD members, especially the United States (see figure 1). Lowering service sector barriers can significantly improve productivity throughout the economy, as improvements in the service sector also tend to lead to efficiency gains in manufacturing. 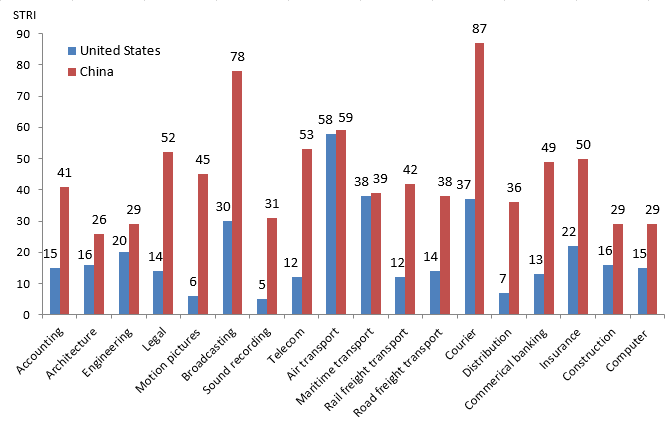 The United States Wins Too

TiSA can dramatically increase those benefits: According to the study Bridging the Pacific, if US services firms were to increase exports from 4 percent to 10 percent of their output over a 5- to 10-year period, US exports would increase by $300 billion, possibly supporting 1.5 million new jobs. China being a part of TiSA would improve those prospects markedly.

China expressed interest in joining the TiSA negotiations back in 2013, but the United States apparently blocked entry because it thought China might “drag its feet” once it was in the negotiations. This may be a legitimate concern, as China was a source of friction in two other plurilateral negotiations on tariff liberalization, the environmental goods agreement (EGA) and the expanded information technology agreement (ITA II). In the EGA, China sought to maintain long phaseouts of tariffs for nearly 40 percent of the products covered. China eventually compromised in both agreements, with the ITA II concluding in 2015 and EGA close to completion.

Now that significant progress has been made in TiSA, it is time to bring China into the negotiations. The United States should state publicly that it welcomes China’s membership before the negotiations conclude, if China agrees to the current level of liberalization reached so far by the negotiators. If the Obama administration fails to approve China’s entry, then the next US president’s administration should move on this in the near term. The European Union has already expressed its support for China’s entry based on Chinese assurances that it would meet the level of ambition in the TiSA talks.

China’s entry would allow it to have a say in the TiSA negotiations on critical issues such as data flows and “new services,”—any new services invented are automatically covered by the terms of the deal. Having China be a part of the negotiation on data flows in particular would facilitate an accord that would be palatable for all parties.

TiSA can be a catalyst for improving US-China economic relations, and its effect would be augmented if China and the United States can agree on a deal for a bilateral investment treaty. Service trade is facilitated by foreign direct investment, which has a dynamic effect on cross-border sales. A TiSA which includes China and the United States will mark an important step in US-China relations.

Thanks for sharing very nice!

US and Global Trade: Economic Fact and Political Fiction