Critics of the North American Free Trade Agreement (NAFTA), the Trans-Pacific Partnership (TPP), and other trade agreements contend that an expansion of trade will significantly drive down average US wages and exacerbate inequality. They harbor similar complaints about US foreign direct investment abroad. This post will examine the link between perceived wage stagnation and globalization, while a follow-up post will focus on the link between trade and inequality.

Gap between Wages and Productivity

To examine the impact of trade and investment on average wages, the widening gap between real average compensation (wages plus fringe benefits) and real average productivity per worker must be considered. Figure 1 portrays the US story between 1947 and 2013, expressing both series as indexes (1947 = 100) and adjusting for inflation. The red line shows real productivity and the blue line shows real compensation, measured by the consumer price index (CPI). 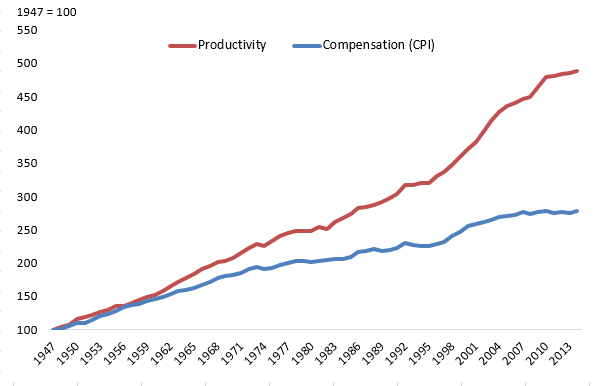 At first glance, the gap between the red and blue lines is striking. While worker productivity expanded fivefold during the post-war period, average compensation (adjusted for inflation) barely tripled. Average real paychecks grew even more slowly, since untaxed fringe benefits (pensions and health insurance) accounted for an ever-larger portion of employment costs. There is no shortage of speculation on the causes of the widening gap portrayed in figure 1. The impact of imports, which grew from 3 percent of GDP in 1947 to 16 percent in 2013, has received special attention.1

Recent studies have examined the link between foreign trade and investment and the US labor market.2 These studies often find an association between increased exposure to foreign competition and poor labor market outcomes for affected workers. One such study, Ebenstein, Harrison, and McMillan (EHM 2015) uses data from the Current Population Survey (CPS) to examine this relationship by comparing occupation-specific changes in exposure and changes in respondent wages between 1983 and 2008. While our analysis does not subscribe to all of their methodology and findings, the EHM study is drawn on as a responsible exposition of the potential harm from greater US exposure to foreign trade and investment.

The EHM authors report that lagged increases in exports and employment at affiliates in high-income countries tend to boost wages, while lagged import competition and employment in affiliates in low-income countries both tend to lower wages. Specifically, a 10 percent increase in low-income affiliate employment decreases US wages by 0.27 percent, while a one-percentage point increase in import penetration reduces wages by 0.24 percent.3

If these coefficients are correct, how would the “competition” effects play out in the big picture of US wage growth? The EHM authors do not answer that question directly, but the data in their appendix provides some guidance. Combining sample averages for select years with the relevant coefficients, the green line in figure 2 portrays estimates of what average US real wages would have been in the absence of the “competition” effects reported in the EHM study.

Figure 2 Productivity and wage indexes, actual and without globalization exposure 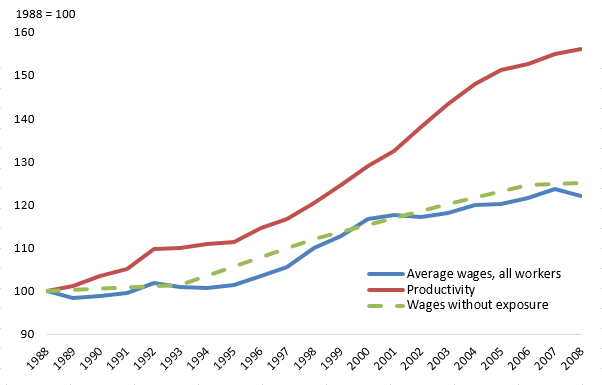 Source: US Bureau of Labor Statistics and authors' calculations.

In 2008, the EHM calculations suggest that average annual wages per worker would have been about $1,025 higher in the absence of the “competition” effects summarized in table 1. In rough terms, this explains about 8.5 percent of the gap between the red and blue lines in figure 1—in other words, it only explains a small part of the significant gap between wage and productivity growth over the period.

It’s important to emphasize that nearly all of the estimated $1,025 “competition” effect reflects the coefficient on low-income foreign affiliate employment, and very little reflects the increase in import penetration exposure. To be sure, US imports have increased substantially, but for the most part US imports do not compete with domestic US production or employment.

That said, only 8.5 percent of the gap portrayed in figure 1 can be attributed to “competition” effects—more outsourcing plus greater imports. What explains the slow growth of wages, if not globalization? To start, note that the divergence between productivity and wages was not driven by employers bolstering their bottom lines. Wages and salaries accounted for 46.5 percent of gross domestic income in 1988, compared with 44.8 percent in 2008—a modest decline and far smaller than the growing gap between wages and productivity. Instead, a large part of the gap was driven by the divergence between CPI and business prices, namely the quick growth of consumer prices—which are used to calculate real wages (the blue line in figure 1)—relative to business sector prices (the red line in figure 1)—which are used to calculate productivity. For a more detailed explanation, see a recent blog post by Robert Lawrence.

Still, the implied impact of foreign competition is substantial in value terms. Based on our analysis, for the entire US labor force in 2008, the losses amounted to $140 billion ($1,025 per worker multiplied by 135 million workers).

However, this calculation gives just one side of the trade and investment story. A positive and compelling outcome from increased import competition is higher efficiency among US firms and lower prices for US consumers.4 Together, these forces create “prosperity” effects that pull against the “competition” effects. Moreover, the losses arising from foreign competition are one-time adjustment costs, while the “prosperity” gains persist indefinitely.

Recent studies offer estimates that help size up the “prosperity” benefits from trade. Computable general equilibrium (CGE) modeling by Petri, Plummer, and Zhai (PPZ 2015) enables a calculation of “dollar ratios”—the relationship between increases in two-way trade and GDP—in the context of the TPP agreement. This capsule ratio reflects a combination of beneficial comparative advantage, productivity, variety, and price effects arising from expanded two-way trade in goods and services. Table 2 summarizes PPZ estimates of two-way trade growth 10 years after the agreement enters into force (hypothetically, 2025) and GDP gains above baseline in that year, both expressed in 2007 dollars. For the United States, the implied dollar ratio is 0.31, suggesting that a $1 billion increase in two-way trade will boost US GDP by $310 million.

The trillion-dollar question is how long it takes GDP gains to materialize after the initial shock of increased two-way trade. In this post, the conservative assumption is made that the US economy fully realizes 20 percent of the projected total gains from increased two-way trade every subsequent year for five years. Under that assumption, increases in US two-way trade between 1988 and 2003—over $1,800 billion expressed in 2008 dollars—delivered GDP gains of nearly $560 billion (the dollar ratio of 0.31 times $1,800 billion) in 2008. Two-way trade grew a further $1,000 billion between 2003 and 2007, delivering additional GDP gains of about $160 billion in 2008.5 In sum, the growth in two-way trade between 1988 and 2008 provided a boost of some $720 billion GDP in 2008.

Of course, a positive contribution to GDP does not imply that all segments of the United States benefited equally. Larger corporate profits and other forms of business earnings typically give a boost to top households in the income distribution, while increased foreign competition likely reduces the wages of poorer workers. A related post examines the breakdown of globalization’s impact in greater detail. In that post, the analysis finds that average annual wages received a boost from “prosperity” effects of over $2,000, for a net gain of $1,000 after the “competition” effect is considered. The underlying calculation, as well estimates of globalization’s impact on the US income distribution, are available here.

1. Data from the US Bureau of Economic Analysis, National Income and Product Accounts.

2. Representative findings suggest that individual workers who are displaced or dislocated suffer income losses of varying magnitude, depending on surrounding circumstances. Ebenstein et al. (2009) and Ebenstein, Harrison, and McMillan (2015) find annual wage losses between 4 and 17 percent for workers displaced by trade. For mass layoffs, Davis and von Watcher (2011) find that dislocated workers lose between 1.4 and 2.8 years of pre-dislocation earnings, varying with the then-current unemployment rate. Riker (2015) suggests that workers in exporting firms earn 10 to 19 percent more than average workers.

3. To be consistent, our analysis relies on the same variables used in EHM. In principle, however, a preferable measure of outsourcing would take the growth of the US labor force into account. If employment abroad at multinational corporations grew at the same pace as the US labor force, it would seem difficult to claim that US workers are facing greater foreign competition. The US labor force grew by about 30 percent between 1988 and 2008, a factor that reduces the apparent magnitude of outsourcing, but does not eliminate it, since low-income foreign affiliate employment grew by 131 percent.