President Trump’s objectives in launching bilateral trade talks with Japan in late April are clear. He wants to boost US agricultural exports to Japan and reduce US auto imports. The agricultural demands are understandable, since farm states missed out on access to the Japanese market negotiated in the Trans-Pacific Partnership.[1] But restrictions on Japanese auto exports have no justification and are likely to backfire to the detriment of Japanese producers, US consumers (who would be hit by rising auto costs), and Japanese investment and employment opportunities in the United States.

To compel Japan’s acquiescence to US demands, Trump has threatened Section 232 national security tariffs or quotas on US auto imports from all sources, including Japan. On February 17, 2019, Commerce Secretary Wilbur Ross gave the president a still secret report that lays out the case, probably in terms akin to the Section 232 steel and aluminum reports Ross delivered on January 11 and 17, 2018, respectively. Trump may keep the auto report in his back pocket while US-Japan talks move forward but continue to threaten 25 percent auto tariffs, as he has done in the past.

Auto products play an outsized role in US-Japan bilateral merchandise trade (table 1). Thanks to its prowess in engineering and factory management, Japan has acquired a strong comparative advantage in the auto sector. Imports from Japan ensure a highly competitive US market, to the advantage of US households. But imports also make Japan a prime target of Trump’s misguided campaign to curtail US trade deficits through tariffs and quotas.

Following Mexico and Canada, Japan was the third largest exporter of autos and parts to the United States in 2018. And Japan was the leading exporter of passenger cars, accounting for 23 percent ($40 billion) of total US passenger car imports in 2018 ($173 billion). However, US imports of auto products from Japan have barely increased in nominal terms since 2000 (figure 1), in part because Japanese firms have invested substantially in the US auto sector over the last 20 years. Japanese foreign direct investment (FDI) stock in the United States increased seven-fold from $6.2 billion in 1990 to $42.1 billion in 2017, spurring US production and employment. Automotive production of Japanese firms in the United States more than doubled since 1990 to 3.8 million units in 2017. For example, Toyota produces 70 percent of US demand for its autos in US plants.[2] According to Prusa (2018), Japanese brand auto companies directly employed 92,710 US workers in 2017, almost 30 percent higher than in 2011. 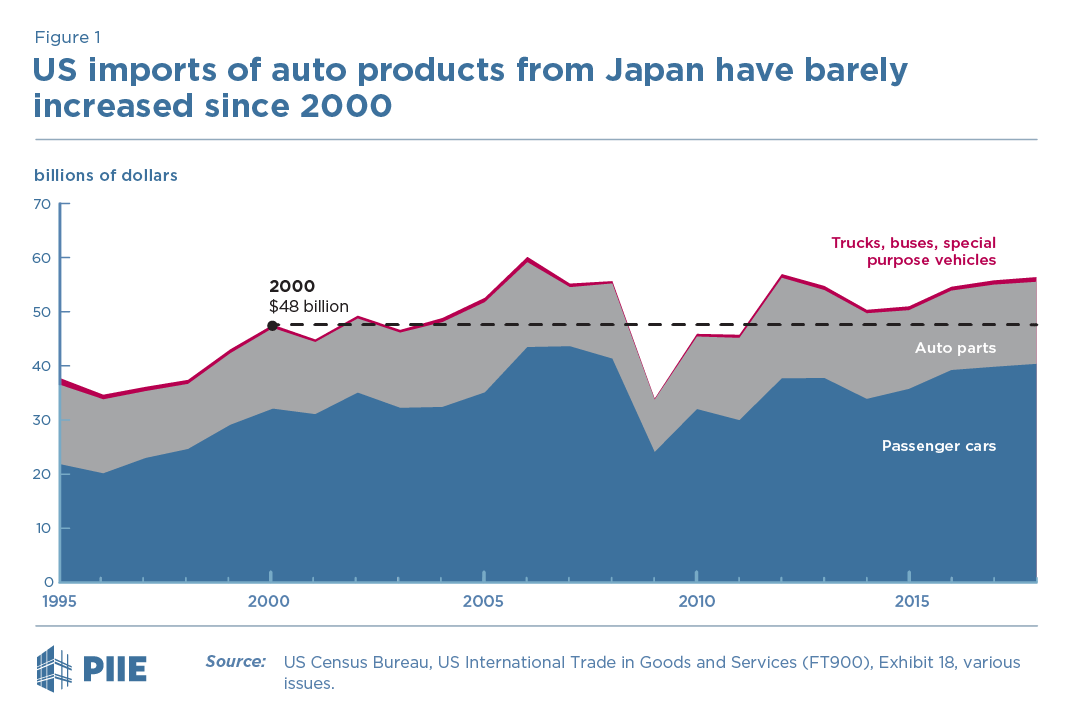 Restrictions on Japanese auto and parts imports would not only interrupt trade but also cast a cloud over Japanese investment and production in the United States. It takes almost five years and several billion dollars to establish a new auto plant. Firms need a degree of certainty about federal and state policies before making that commitment. An industrial policy of managed trade, subject to unpredictable interference from Washington, does not spell business certainty. Yet talks seem pointed in that direction, if the present administration has its way.

The current state of North American auto trade indicates the possible contours of a US-Japan agreement. Under a side letter to the US-Mexico-Canada Agreement (USMCA), if auto restrictions on national security grounds are eventually imposed, some 2.6 million passenger car imports each from Canada and Mexico would be exempt. Imports above those levels would be subject to whatever tariffs or quotas Washington might decide. In addition, Canada and Mexico would be subject to annual auto parts quotas of $32.4 billion and $108 billion respectively. The contemplated auto and parts quotas are substantially higher than current import levels (table 2). This precedent, if extended to Japan, might cause free trade observers to relax, but that would be short-sighted. Once the principle of managed trade is established, the actual restrictions become only a matter of terms that could easily change from time to time. President Trump or his successor could wake up one morning, decide that quotas should bite, and reopen talks with Canada, Mexico, Japan, Europe, and other suppliers. Moreover, the USMCA sets a 75 percent rule of origin on auto trade with Canada and Mexico (up from 62.5 percent in the North American Free Trade Agreement, the predecessor to the USMCA). Japan can expect the United States to demand a similar or more stringent figure.

Japan is no stranger to US restrictions on auto imports. During the Reagan administration, Japan acquiesced to a voluntary export restraint in May 1981, with a ceiling of 1.68 million units; the restraint was finally lifted in 1994. The induced increase in the price of imported autos was an estimated 11 percent on average over the period 1981 to 1984, inflicting a cost to US consumers of $5.8 billion in 1984.[3] Similar effects could be in store for American households buying autos in the 2020s. The enduring quality of trade restrictions on vehicles, once put in effect, is exemplified by the “chicken war” tariff of 25 percent on trucks (including pickups) imposed in 1964 and still in effect more than 60 years later.

The United States should prioritize frontier trade issues, like services and digital flows, not trade deficits

Advanced economies like the United States and Japan should not be restricting autos or other merchandise flows in their trade agreements. Instead, they should prioritize frontier issues concerning cross-border digital flows, nontariff barriers to services trade, and intellectual property protection, as recommended by the McKinsey Global Institute. Unfortunately, owing to US insistence, talks between US Ambassador Robert Lighthizer and Japan’s Economic and Fiscal Policy Minister Toshimitsu Motegi might be stuck in the past. Restrictive demands on auto trade would be bad for Japan and bad for the United States. It makes no sense for advanced economies to fixate on merchandise trade balances. Minister Motegi and Prime Minister Shinzo Abe should vigorously oppose auto tariffs and quotas.

1. The TPP was rejected by Trump on his third day in office (January 23, 2017). Farm states subsequently lost more Asian sales owing to Chinese retaliation in the trade war.