Trump is right that trade agreements have been one-sided—but he is wrong about the direction. Recent US trade deals, both multilateral and bilateral, have involved much bigger tariff cuts by US trading partners than by the United States.

While it is true that the United States is a relatively open economy, its openness has little to do with the formation of the WTO in 1995 or any other recent trade agreements. The United States has been open since the General Agreement on Tariffs and Trade (GATT, the WTO’s predecessor) was formed in 1947, and back-to-back trade rounds lowered the trade-weighted tariff (simple tariffs are not available for this period) from 13 percent to less than 6 percent in 1949. So, while the United States does offer a relatively open market to other WTO members, the sharpest tariff cuts happened 70 years ago. Moreover, several countries have lower tariffs than the United States—and Hong Kong and Singapore have no tariffs at all.

Recent US trade deals have involved much bigger tariff cuts by US trading partners than by the US.

As a result of being historically open, US free trade agreements tend to require more liberalization from other countries than they do from the United States. Consider the North American Free Trade Agreement (NAFTA): US simple average tariffs were just 6 percent when NAFTA was formed, and Mexican tariffs were on average 14 percent. The higher Mexican tariff meant that US exporters had a bigger advantage over exporters from other countries in Mexico than Mexican exporters faced in the United States. Similarly, Korea’s average tariff was 12 percent when the Korea-US agreement was reached. Under the Trans-Pacific Partnership (TPP-12), the United States would have had similarly strong preferences in Vietnam, where average tariffs are 10 percent. 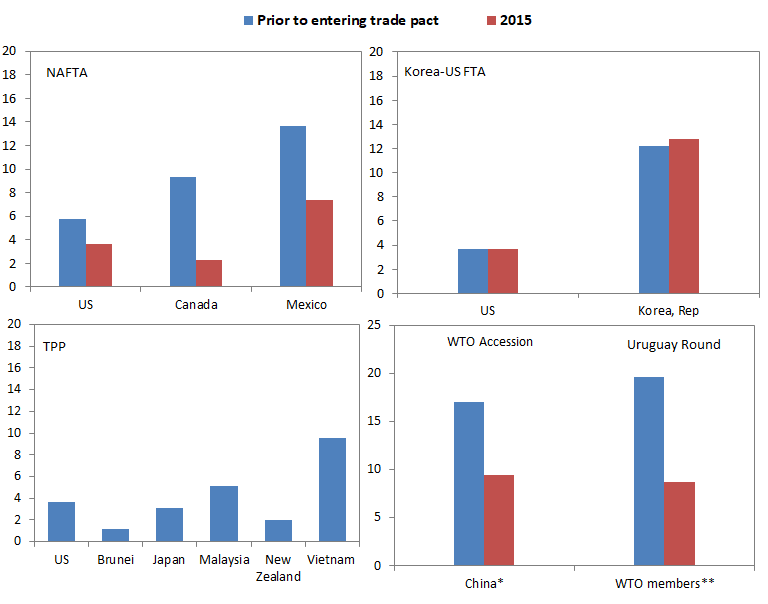 Free trade agreements also offer US exporters certainty about the tariffs that they will face. Most developing countries charge tariffs that are much lower than what they are required to by the WTO. For example, Mexico has only committed to keeping tariffs below 35 percent for WTO members. In contrast, the United States has committed to keeping tariffs at applied rates of less than 4 percent on average. In the absence of NAFTA, Mexico could raise tariffs dramatically on many products imported from US exporters, without being subject to dispute or having to compensate foreign producers.

The most recent WTO agreement, the Uruguay Round, which created the WTO, also primarily liberalized trade in other countries and pushed developing countries to bind their tariffs on most products. The simple average most favored nation (MFN) applied tariff of WTO members was 20 percent in 1994 and fell to 9 percent in 2015 (most recent year). On average, WTO members have reduced applied tariffs by more than 10 percentage points since the Uruguay Round. A good deal of the reduction was the result of unilateral liberalization, but because WTO members must apply one tariff to all members, all trade liberalization by members—whether negotiated or not—benefits the United States. In contrast, after the Uruguay Round, the US tariff fell by less than 2 percentage points over the same period.

As a result of being historically open, US free trade agreements tend to require more liberalization from other countries than they do from the US.

The United States also benefits when new countries join the WTO. China, for example, was required to open its economy, but existing members did not have to make any changes to their tariffs in return. China’s tariffs fell from 17 percent in 2000 to below 10 percent now. All China got in return was insurance that China would be treated as a normal partner, something the United States had already been doing for more than a decade.

But if other countries have been liberalizing trade more than the United States, shouldn’t the US trade deficit be disappearing, as US businesses export more and more goods?

This intuition is based on faulty logic, perpetuated by Trump and his trade team in their attack on trade. What the trade deficit actually shows is that the households, firms, and government in the United States spend more on goods and services than they earn—just as individuals go into debt if their spending exceeds their income. As other countries have lowered their barriers, the United States has exported more, but that has meant there are fewer American goods being sold to US consumers. To maintain consumption levels as exports rose, US consumers, businesses, and the government imported more goods from abroad. So, as foreign tariffs abroad fell, total trade expanded, but the effect on the US trade deficit was negligible.

The world trade rules were written by the United States, and there is no question that the US benefits enormously from free trade. Under the GATT, US gains came primarily from domestic liberalization, which meant lower prices and more product varieties for consumers and better access to parts and components for producers. In recent years, the United States has benefitted as foreign markets have been liberalized under the WTO and through regional trade agreements. International trade rules have also helped weave the world economy together, promoting peace and prosperity.

A very good reason would be needed to undo the rules that the United States and others have painstakingly crafted over seven decades. Unfair trade liberalization is clearly not a candidate.

US-Kenya trade negotiations: A chance to get it right

Reinventing the Wheel: Phase One of the US-Japan Trade Pact