The Pacific Alliance and Mercosur: Narrowing the Gap?

On November 24, 2014, Chile’s president, Michele Bachelet, will host a meeting between the Pacific Alliance and Mercosur trading blocs. The aim of the meeting is to explore ways to increase trade ties between the blocs. The unstated aim is to send a political signal that relations are well between the two and that the gap between the two largest economic entities in Latin America is not as large as it seems.

And the gap does appear to be wide. The Pacific Alliance and Mercosur represent poles in a bifurcated region, at least in terms of economic policy. Figure 1 illustrates this using some basic competitiveness measures, but a similar picture is painted if other indicators of trade policy, openness, and governance are used: The 21st century socialists—Mercosur and its allies cluster on one side; Pacific Alliance members and associates on the other. 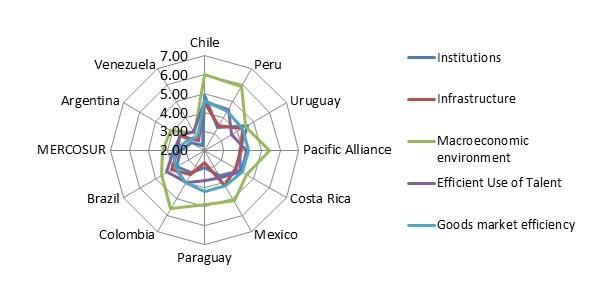 The Pacific Alliance, currently comprised of Chile, Colombia, Mexico, and Peru, with Costa Rica in the process of joining, is an innovative Latin American trade grouping. Whereas Latin American trade and integration arrangements have traditionally aspired for customs union or common market status, the Pacific Alliance has been careful not to bind its members to unrealistic goals and to accomplish as much as possible among the like-minded group without holding its achievements hostage to unachievable goals. In this, the countries learned their lesson from the Free Trade Area of the Americas (FTAA) process, whose principles of consensus and single undertaking were part of its undoing.

In its short life, the Pacific Alliance, which comprises 41 percent of Latin America’s GDP and 68 percent of its trade, has made some significant strides. In addition to harmonizing their common free trade agreements into a more liberalizing common agreement, the Alliance has taken initial steps to liberalize the movement of people by eliminating visa requirements for nationals from other Pacific Alliance countries. In addition to sending a strong signal of cooperation, eliminating visas may also help spur trade and investment by lowering the costs of travel, which can bolster cross-border business and stimulate the development of commercial networks. Starting next August, the Alliance countries will go even further, implementing a “working holiday” visa program that will allow citizens from member countries between the ages of 18 and 30 to live and work in other member countries for up to a year. This program can help these countries address the problem of youth unemployment, which haunts Latin America, and can also help companies draw from a greater pool of young talent.

Another unique aspect of the Pacific Alliance is the agreement to share embassies and trade promotion agencies. So far, a number of joint embassies have been established among some combination of the four countries in Algeria, Azerbaijan, Ghana, Morocco, Singapore, and Vietnam.

Finally, the Pacific Alliance countries are integrating their stock exchanges through the Mercado Integrado Latinoamericano (MILA), a burgeoning regional stock exchange. Once Mexico joins, the MILA will boast a market capitalization of about $1 trillion with nearly 800 companies. This will represent about 50 percent of the domestic market capitalization of Latin American stock markets.

In addition to its economic commitments, the PA recognized the importance of governance. The agreement includes a democracy clause, which mandates that members have a functioning democracy, the separation of power, and the protection, promotion, and guarantee of human rights and fundamental liberties.

The Pacific Alliance has received tremendous international attention. For example, 30 countries have signed up as observers of the process. These observer countries are drawn from all continents, including Canada, the United States, China, India, and most European countries. This interest reflects the hope for a more open and investor-friendly Latin America.

To date, the Pacific Alliance has stayed true to its objectives of deeper integration among members and enhanced integration into the global supply chain by strengthening ties with Asia. Progress is contingent upon the maintenance of these principles and goals. A Pacific Alliance–Mercosur agreement can be very positive for Latin America, particularly if enhanced trade eliminates barriers to incipient Latin American value chains and if the Pacific Alliance can spur the Mercosur countries to abandon some of their more distortionary policies, which keep them towards the bottom of most international competitiveness rankings.

It would be a loss to the region, however, if current politics were to lead to a diminution of the Alliance’s goals. The current requirements to join are an in-force free trade agreement with all of the current members and willingness to accept all of the Alliance’s obligations. Early talk of Canada’s potential interest in joining was rapidly undercut by the requirement to eliminate visas—an obligation the group is not willing to loosen.

Closer ties with Mercosur can be seen as a pragmatic step for both groupings. The Pacific Alliance leaders are smart to recognize the importance of the region to their countries’ economies. Recent steps also indicate that they will, however, also be strategic enough not to allow ideology to overwhelm pragmatism, and to keep their economic goals from allowing the Pacific Alliance to be slowed down by regional politics, or worse to become one more Latin American regional integration talk shop.