The Trump administration views trade mostly as a zero-sum game. In the past, it argues, China has won and the United States has lost. It is thus time to turn the tables, for the United States to win and for China to lose. Most economists, by contrast, believe that trade is a mostly positive-sum game, that both countries can gain from more open trade and both can lose from less open trade.

We thought it would be interesting to test what market participants think. To do so, we looked at the joint response of the Chinese and US stock markets to President Donald Trump’s China-trade-related tweets. The bottom line: If markets believed that trade was indeed mostly a zero-sum game, one would have expected the two markets to move in opposite directions. In fact, both markets typically reacted in the same direction. Some tweets were good news for both countries, some tweets were bad news. Few, if any, were good news for one and bad news for the other. In short, markets did not see trade negotiations as a zero-sum game.

We proceeded as follows. We first collected all Trump tweets from www.trumptwitterarchive.com, starting on June 11, 2018 and ending on June 11, 2019, and containing the word “China.” We removed all retweets and tweets that were duplicate versions of past tweets (tweets are sometimes reissued later because of minor misspellings). We combined all the tweets that were part of the same thread into a single event. We removed all tweets unrelated to trade. This left us with 71 tweets. (The intent of the tweets was often confusing to us, and we found it difficult to categorize tweets ex ante as increasing or decreasing the probability of a trade war. Thus, we decided not to take a stand and to limit ourselves to looking at whether markets moved together or not.)

We then collected stock market responses following the tweets using futures prices for the S&P 500 and FTSE China A50 indexes. (The FTSE China A50 index is an index of the 50 largest Chinese firms traded on either the Shanghai or the Shenzhen stock exchanges.) We used futures prices because most tweets were issued when the Chinese spot market was closed. Some tweets were issued when the futures markets were closed at the start or the end of the window, either in China or in the United States, and we had to drop those observations. This left us with 36 to 46 usable tweets depending on the size of the post-tweet window. 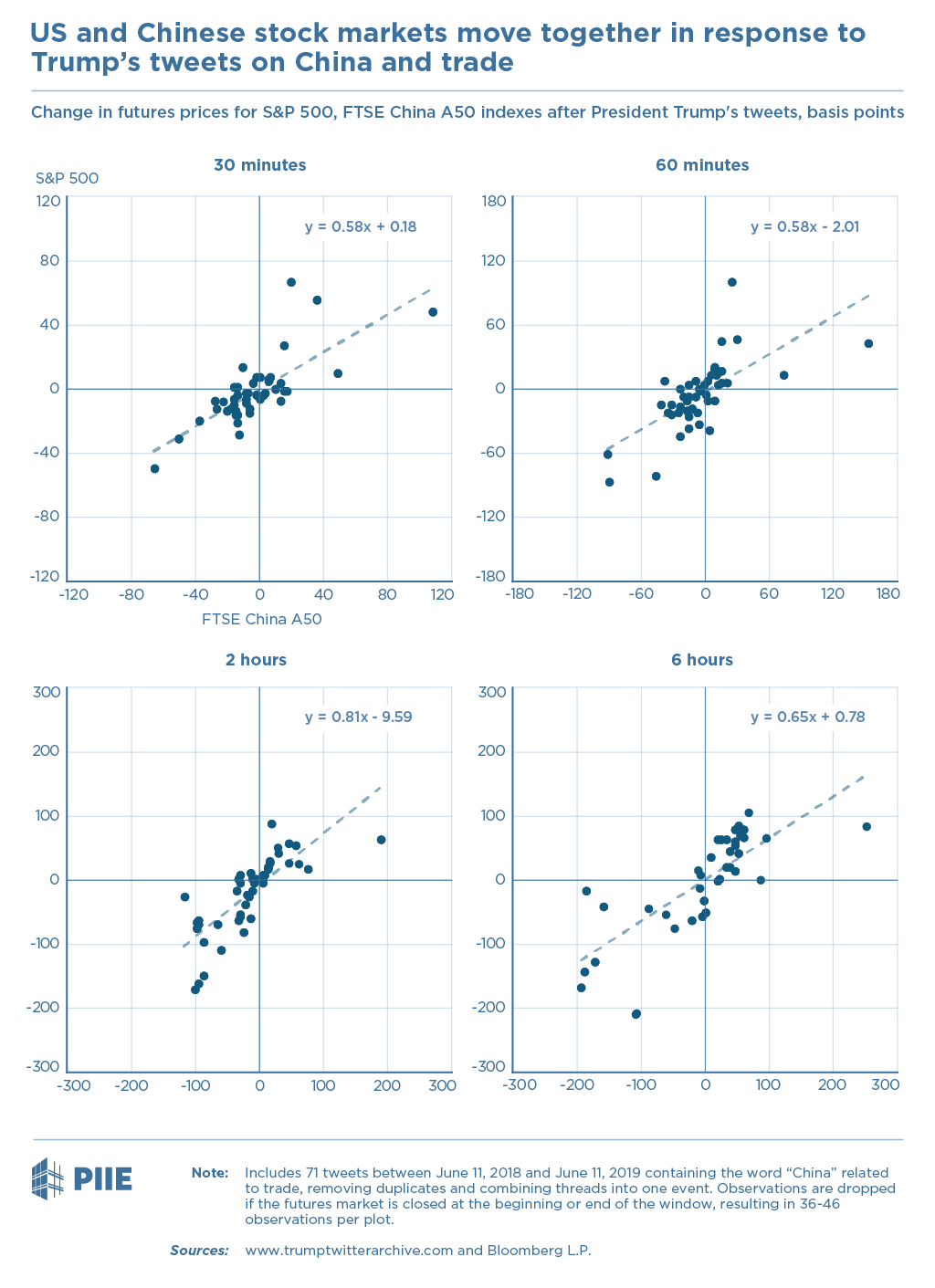 The visual impression, from any of these windows, is very clear. The correlation between Chinese and US stock price changes is strongly positive and significant, equal to 0.58 for price changes after 30 minutes, 0.58 after 60 minutes, 0.81 after 2 hours, and 0.65 after 6 hours. (For comparison, the unconditional correlation of price changes varies between 0.24 and 0.34 over the different windows). In short, market participants do not share the beliefs of the Trump administration that trade wars are a zero-sum game. They see trade wars as bad for both countries.