Implementation of the Joint Comprehensive Plan of Action (JCPOA) lifting sanctions on Iran over its nuclear program began on January 16, 2016. Under the JCPOA, the United States, China, France, Russia, the United Kingdom, and Germany agreed to lift a variety of sanctions on Iran in return for steps to dismantle large parts of nuclear facilities and infrastructure. Confirmation by the International Atomic Energy Agency (IAEA) that Iran had taken these steps led to “Implementation Day” on January 16. For more detail on the terms of the JCPOA, see our earlier blogpost.

Years of economic pressure resulting from the sanctions on Iran led to the JCPOA agreement last year. The sanctions were imposed by the United States, the European Union and the United Nations in cooperation with India, China, Japan and Korea. The sanctions included not only a trade ban on oil but also financial measures such as freezing Iranian assets abroad and prohibiting transactions with Iranian banks. This post discusses the economic trends in Iran when the most onerous sanctions were imposed, which created the conditions for successful diplomacy.

Analysis published by the Peterson Institute for International Economics  suggests that economic sanctions are more likely to be successful when measures hit hard, when financial controls are a big part of the sanctions package, and when the package is enforced through international cooperation (Hufbauer et al. 2007). The Iranian case supports these lessons. 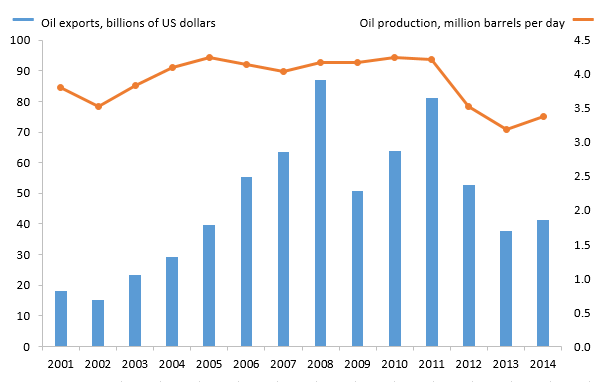 The sharp decline of oil earnings damaged Iran’s economy acutely in 2012 and 2013 (see table 1). According to World Bank statistics, Iran maintained average GDP growth of 5 percent up until 2011, measured in current dollars. In 2012 GDP plummeted by 7 percent and stayed negative in 2013. The Iranian rial collapsed by 51 percent in 2013, and inflation spiked by 35 percent. General government revenue, largely from oil, declined to 14 percent of GDP in 2012, compared to 26 percent in 2007.

Sanctions Relief Under the JCPOA

Sanctions lifted under the JCPOA provided relief to Iran’s oil, banking, and shipping sectors. Resumption of trade with Europe and other partners will increase Iran’s oil revenue. The JCPOA will also allow the Iranian central bank and other entities to access $56 billion of assets currently frozen overseas, out of $115 billion total (see Katzman 2016). Strict US financial sanctions barring even non-US persons from financial and banking transactions with Iran will be lifted, but the ban on US citizens and entities carrying out such transactions remains. This relief will facilitate transactions with the Iranian central bank and designated individuals and entities, the transfer of Iranian funds, and the issuance of Iranian sovereign debt—all steps that will help Iran to reengage in global financial markets. The IMF estimates that sanction relief would boost Iran’s GDP growth to 4.4 percent in 2016 (see World Economic Outlook).

The JCPOA will facilitate sanctions relief related to Iran’s nuclear program, but the United States will continue sanctions related to terrorism, ballistic missiles development, and human rights. In those areas, US sanctions are much more extensive than those of other countries.