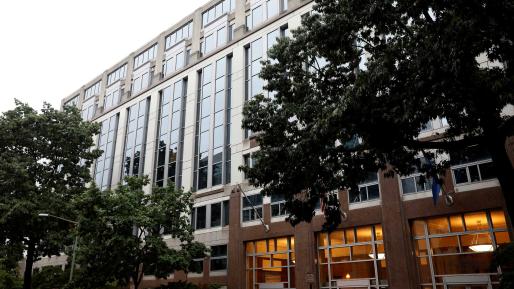 The US International Trade Commission (USITC) is a respected independent, nonpartisan, quasi-judicial federal agency that analyzes trade issues for the president and the Congress. But in June 2021, the commission released a report of 386 pages, titled Economic Impact of Trade Agreements, which committed serious methodological blunders that mislead the public on the value of trade accords implemented since 1984.

The USITC delivered an overall estimate that trade agreements have added very little to trade growth and therefore to economic growth. This finding may cheer protectionists and those who want trade agreements to pay less attention to trade barriers and more attention to social issues. But the USITC made two major mistakes. First, in analyzing the North American Free Trade Agreement (NAFTA) enacted in 1993, which entered into effect in January 1994, the USITC failed to measure the growth in US-Mexico trade separately from growth in trade with Mexico and Canada together. Second, the commission omitted altogether China’s accession to the World Trade Organization (WTO) in 2001, by far the biggest trade agreement of the 21st century, on the ground that accession is not a free trade agreement (FTA). Without these mistakes, the USITC report would have shown much more dramatic growth in trade resulting from liberalizing trade in the last three decades.

The report attributes, as of 2017, an increase of $89 billion in US exports to trade agreement partners and an increase of $118 billion in US imports from the partners—totaling $207 billion in two-way trade creation (all numbers are rounded). However, as a consequence of agreements, US exports of $52 billon and US imports of $22 billion were diverted from nonpartner countries, and these numbers were subtracted from the trade creation figures. Taking account of exports and imports diverted from nonpartners, the USITC estimated net two-way trade creation, as of 2017, at $133 billion. This estimate of net trade creation, in turn, drives the USITC estimate that there have been only incremental US GDP gains, employment impacts, and distributional effects.

To estimate trade creation, the USITC relied on a “state of the art” gravity model of bilateral merchandise trade flows, published by Baier, Yotov, and Zylkin (2019). However, the way the model was applied did not take proper account of NAFTA and altogether omitted China’s accession to the WTO.

NAFTA has been by far the most important free trade agreement the United States has undertaken in the last few decades. The USITC estimated that NAFTA lowered trade barriers between the United States and its two partners, Canada and Mexico, by 8.1 percentage points. [1] The USITC report does not reveal a dollar figure for two-way US trade gains with its two partners resulting from that barrier reduction. However, NAFTA trade in 2017 was $1.075 trillion (ITC report, table 3.4), some 74 percent of all two-way US trade with agreement partners ($1.450 trillion). Very likely, roughly 74 percent of the USITC’s trade creation estimate should be attributed to NAFTA—in other words, $153 billion (74 percent of $207 billion). The analysis in this blog, plus analysis cited in the USITC report from other scholars, suggests that this figure is far too small.

The USITC did not separately analyze the Canada-US FTA of 1989. However, that agreement essentially eliminated merchandise trade barriers between the US and Canada, with the exception of agriculture. The NAFTA of 1994 made very little change in US-Canada barriers (including no meaningful liberalization of agricultural trade). What NAFTA did was reduce US-Mexico barriers, particularly Mexican tariff and nontariff barriers. If the USITC had properly recognized this fact and estimated a percentage point reduction in US-Mexico barriers, the reported figure would have been much larger than 8.1 percentage points.

Figure 1 compares post-NAFTA growth of US-Mexican merchandise trade (expressed in current dollars) with the growth of US merchandise trade with six leading Latin American countries—Argentina, Brazil, Chile, Colombia, Peru, and Venezuela. Taken together, these six countries are good comparators to Mexico. As figure 1 shows, from pre-NAFTA to 2017, US-Mexican two-way merchandise trade expanded 6.8 times in current dollars, while US trade with the six increased only 3.7 times. Of course, other forces were at play besides NAFTA, including subsequent US trade agreements with Chile (2004), Peru (2009), and Colombia (2012). But if US-Mexico trade had grown only as fast as US trade with the six, in 2017 US-Mexico two-way trade would have been $306 billion, rather than $559 billion—a difference of $253 billion. A difference of this magnitude between hypothetical and actual US-Mexico trade calls into question the USITC’s estimate of trade creation of just $207 billion from all trade agreements. 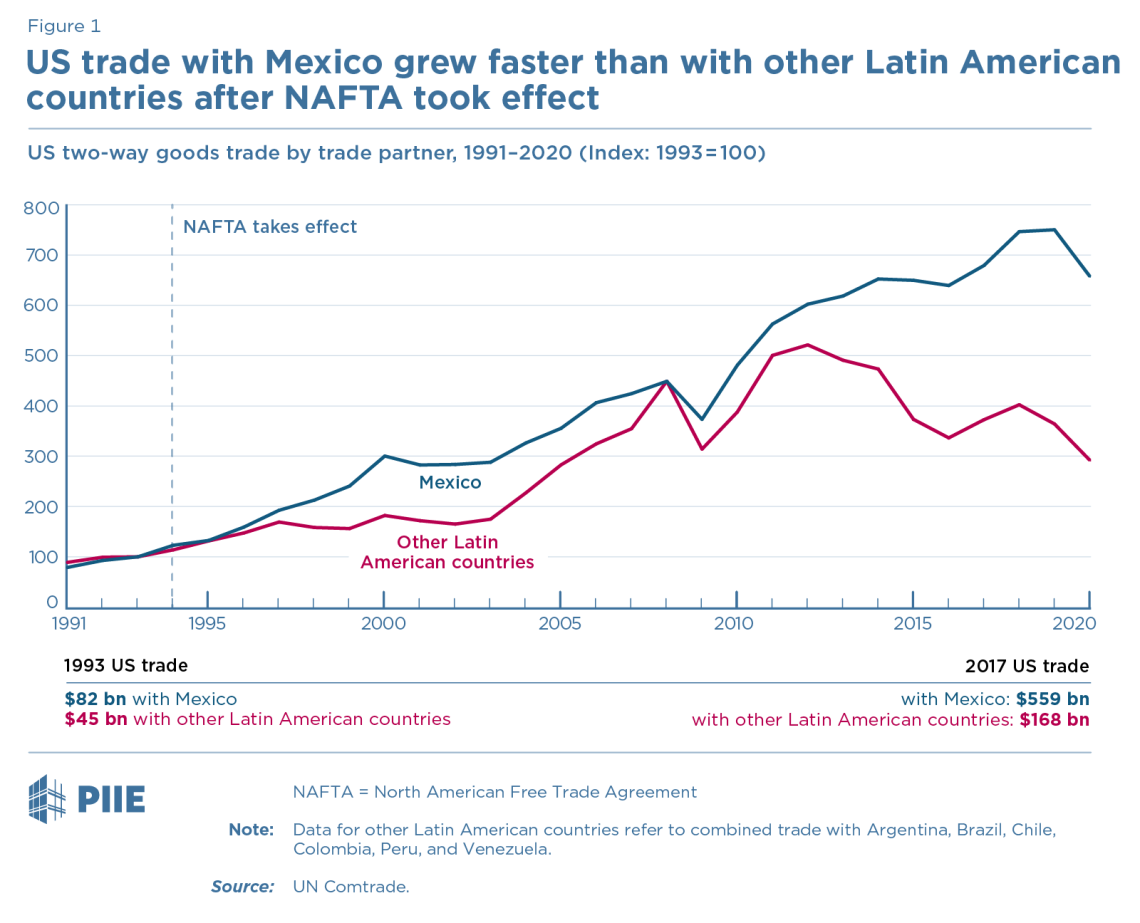 The estimates of other NAFTA scholars cited in the USITC report, without refutation, reinforce a skeptical attitude. Heo and Doanh (2020) estimated that, between 1989 and 2016, NAFTA enlarged trilateral trade by 58.2 percent. The overwhelming share of trilateral trade was between the US and Mexico, on the one hand, and between the US and Canada, on the other, with rather little between the Mexico and Canada. The USITC reports that US two-way trade with its two partners was $1.075 trillion in 2017. If NAFTA increased this trade by 58.2 percent, the implication is that NAFTA increased US two-way trade with Mexico and Canada from $680 billion to $1.075 trillion, an increment of $395 billion.

Continuing in this vein, the ITC cites Zylkin (2016), who estimated that NAFTA increased aggregate trade by 78.6 percent, compared with 37.6 percent for all other FTAs. Later, Baier, Yotov, and Zylkin (2019)—the same article referenced by the USITC for its gravity model—estimated that NAFTA increased aggregate trade by 93.9 percent, in other words almost a doubling. These NAFTA estimates by other scholars, like the figures in this blog, cannot be easily reconciled with the USITC’s estimate of trade creation from all trade agreements of just $207 billion in 2017.

While the USITC report’s title is Economic Impact of Trade Agreements, the most important trade agreement of the 21st century is omitted from the report, namely China’s accession to the WTO in 2001. The central protagonists in this landmark event were the United States and China. True, critics of WTO accession cite evidence that it led to lost US jobs along with economic gains, but opponents and proponents of Chinese accession both recognize the event as an enormously important trade agreement. Yet trade creation between the United States and China makes no appearance in the USITC report.

Figure 2 makes a start at rectifying the omission. From pre-WTO accession to 2017, US-China two-way merchandise trade expanded 5.65 times in current dollars, while US trade with the rest of world increased only 1.75 times. Again, other forces were at play, most notably the transformation of the Chinese economy (owing in part to WTO accession). However, if US-China trade had grown only as fast as US trade with the rest of the world, in 2017 US-China two-way merchandise trade would have been $203 billion, rather than $656 billion—a difference of $453 billion. Put another way, this counterfactual exercise suggests that, if Chinese accession were properly recorded as a trade agreement, the USITC’s report might suggest US-China trade creation approaching $453 billion, plus whatever trade creation could be attributed to NAFTA and all other US trade agreements. 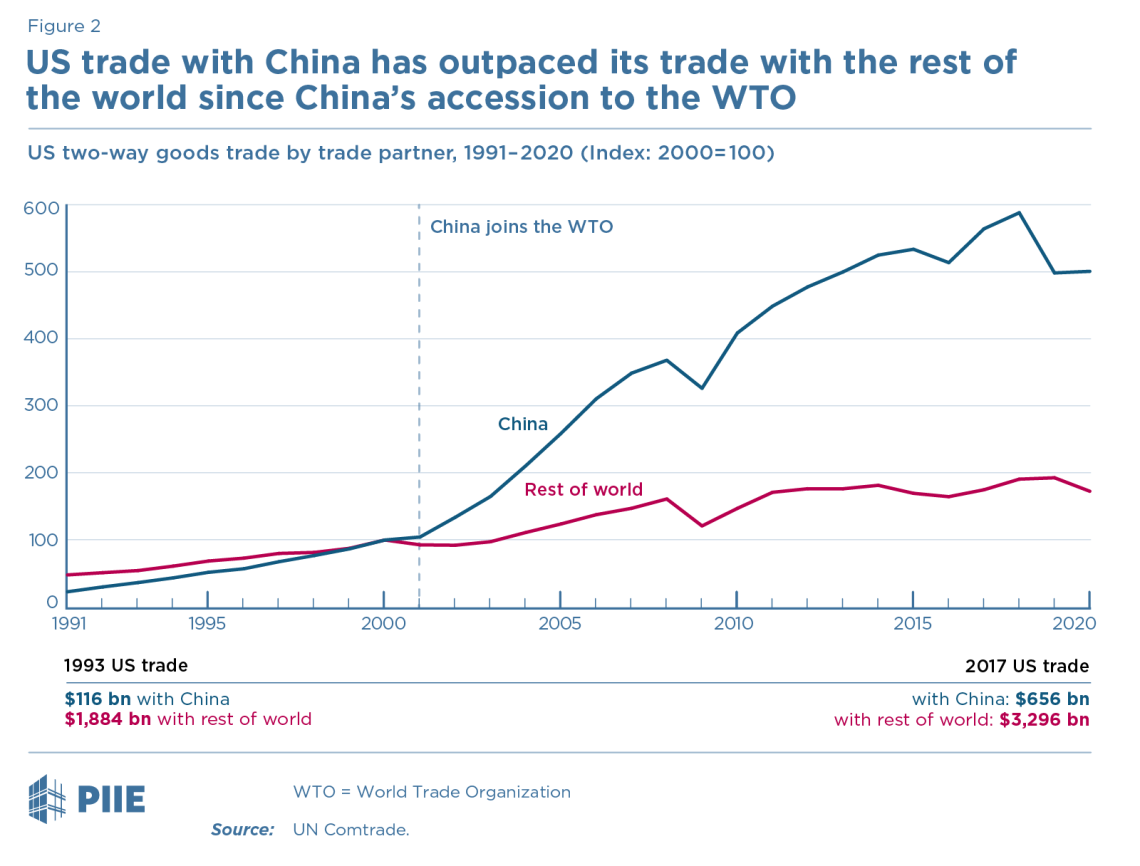 Without subscribing to a precise number for trade created by US trade agreements since 1984, it is clear that the USITC seriously underestimated the annual gains, as of 2017, that can be fairly attributed to US trade diplomacy. In turn, US GDP gains and distributional impacts of expanded trade are badly undercounted. Those who oppose globalization may take heart in the USITC’s modest estimates. But those who support globalization as an engine of economic welfare, both in the US and abroad, should not accept the small payoff implied by the USITC report.

1. The effect of a trade agreement was captured by an exponential term with a dummy (0, 1) coefficient indicating whether the US had an agreement with the partner country. The specification of an exponential term meant that the coefficient could be interpreted as a tariff-equivalent percentage point reduction in two-way bilateral trade barriers. The reduction in barriers was then translated into a dollar increase in two-way trade for the year 2017. Parallel calculations generated estimates of trade diverted from nonagreement partners.