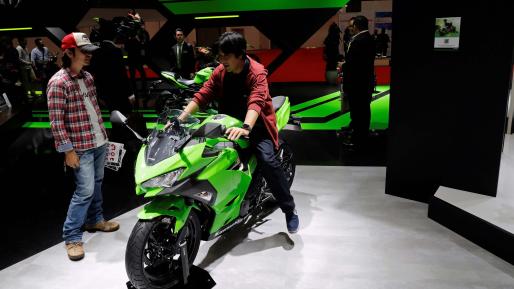 When Harley-Davidson announced plans on June 25 to shift some additional motorcycle production overseas, it blamed President Trump’s decision to impose tariffs on US imports of steel and aluminum. Those tariffs, after all, were what prompted the European Union to retaliate on June 22 by raising its tariff on US motorcycle exports to Europe from 6 to 31 percent.[1]

Somewhat unfortunately, one could not find a better case study than this episode of how the Trump administration’s trade policy weakens American export competitiveness.

US-produced motorcycles are part of a broader list of US products on which the European Union imposed tariffs on June 22. Other American products include bourbon, peanut butter, and cosmetics, as well as steel and aluminum. Companies in all these industries will find they are now less competitive in the massive European market than other companies around the world.

The Trump administration’s tariffs on steel and aluminum, as well as tariffs scheduled to be imposed on China on July 6, target mostly intermediate inputs. More expensive inputs mean higher costs for US-based manufacturing relative to the cost of manufacturing in other countries using those same inputs.

To sell a US-produced Harley to one of the European Union’s 500 million consumers, Harley-Davidson would now need to pay a 31 percent tariff, adding an estimated $2,200 to the cost of a motorcycle, a cost not borne by a European competitor producing for EU consumers, such as BMW.

On top of these factors, the European Union continues to pursue tariff-reducing trade agreements with countries around the world. It recently signed a free trade agreement with Japan—home to companies like Yamaha, Kawasaki, and Honda, which produce motorcycles that compete with Harley-Davidson. The EU-Japan trade deal will reduce the EU tariff on Japanese-produced motorcycles in the first year after implementation from 6 to 4.5 percent. The EU tariff toward Japan will be cut to zero after four years. At that point, Harley-Davidson will thus face a 31 percent price disadvantage relative to Japanese companies as well.

Rather than striking deals like this one, the Trump administration has not only walked away from negotiated trade deals—like the Trans-Pacific Partnership (TPP), which included Japan—but also failed to take up ongoing negotiations with the European Union to reciprocally reduce tariffs under the Transatlantic Trade and Investment Partnership (TTIP). Left on the sidelines while other countries cut tariffs toward each other, the United States is making domestic production for export to the EU market less competitive than production taking place elsewhere.

In response to the Trump administration’s potential application of “national security” tariffs, on May 18 the European Commission notified the World Trade Organization’s (WTO) Committee on Safeguards of its plan to impose tariffs against the United States if the Trump tariffs went forward. In its view, these tariffs would be an “economic safeguard in disguise” and thus should be treated as if they were imposed under the WTO Agreement on Safeguards. The European Union’s legal interpretation was that immediate compensation—in the form of a limited imposition of new EU tariffs on US exports—would be permissible to “rebalance” the trading relationship in light of the steel and aluminum tariffs.

Breakdown of US Products Targeted by June 22 EU Tariffs

EU tariffs imposed on June 22 hit 182 US products. Figure 1 breaks down the products by type. Based on Eurostat data from 2017, the list targets $3.2 billion of products imported from the United States. 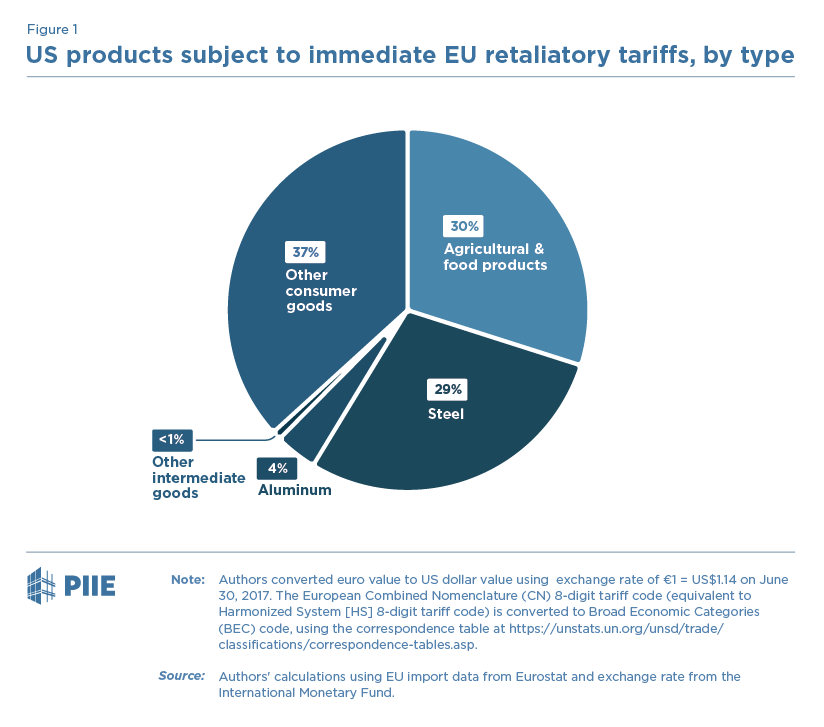 EU imports of steel and aluminum alone account for 33 percent of targeted US products. The rest are agricultural and food products (30 percent) and other consumer goods (37 percent).

Retaliating against imports of US steel and aluminum serves at least two purposes for the European Union. First, penalizing some of the same US industries that benefit from President Trump’s “national security” tariffs may help mobilize those American interests—once they also experience the costs of tariffs—to push harder to politically help convince Trump to end the protection. Second, a lot of steel and aluminum imports shut out of the American market by Trump’s tariffs will tend to gravitate toward the European market—an economic phenomenon sometimes referred to as “trade deflection.”[3] The EU tariffs—even on the United States—will help moderate that expected surge in imports, which may otherwise impose considerable adjustment costs on EU industries.[4] 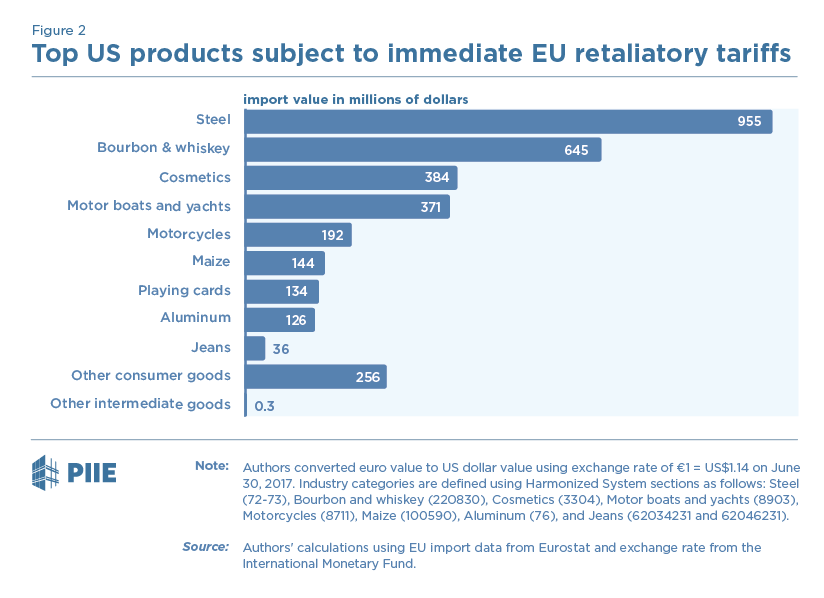 As these figures illustrate, Harley-Davidson is only one of many American companies, alongside American farmers and workers, that are being harmed by President Trump’s approach to trade policy. Announcements like this may become a regular, albeit unfortunate, event.

1. In its June 25, 2018 regulatory filing with the Securities and Exchange Commission, Harley-Davidson indicated “The European Union has enacted tariffs on various U.S.-manufactured products, including Harley-Davidson motorcycles. These tariffs, which became effective June 22, 2018, were imposed in response to the tariffs the U.S. imposed on steel and aluminum exported from the EU to the U.S…. To address the substantial cost of this tariff burden long-term, Harley-Davidson will be implementing a plan to shift production of motorcycles for EU destinations from the U.S. to its international facilities to avoid the tariff burden.”

4. In the case of steel, these EU tariffs could become redundant given that the European Union may end up imposing broader safeguard import restrictions of its own after it completes its recent investigation.

5. Interestingly, there is a considerable discrepancy in the European Union’s reported 2017 import data ($190 million) and the United States’ reported export data ($505 million) for motorcycles for HS category 871150 (Motorcycles with engine exceeding 800CC).