The United States and China have remained tight-lipped during the months-long negotiations to resolve their trade war. While several issues are at stake, the Trump administration has continually highlighted one major American concern: the explicit and implicit subsidies resulting from China’s unique, state-directed economic system. The production excesses and flood of cheap exports have created political and economic problems in a number of sectors. Global examples include steel, aluminum, and solar panels.

But as the talks draw to a close, a big worry has emerged. What if Trump eases off demands that China drop its industrial subsidies, just so he can maintain access to steep and easy tariffs?

The subsidy conflict was a growing source of unease long before Trump. And the US special tariffs targeting that Chinese problem were escalating during both the Bush and Obama administrations. China had also politically elevated the issue by challenging those US tariffs through a number of high-profile disputes at the World Trade Organization (WTO). Anxious that China might win, the Trump administration has been demanding, according to leaked documents, that Beijing back off the WTO cases. [1]

One fear of the current negotiations remains clear. The underlying subsidy problem will not have been solved if Trump’s deal only means the United States makes it easier for itself to impose special tariffs on China. Trade tensions would likely escalate again, perhaps sooner rather than later, putting the US-China conflict back to square one.

Here are five things to look out for in any Trump deal.

1. Temper expectations; US special tariffs on China will not disappear.

The current US-China tariff situation is a mess. You need a Venn diagram to illustrate the full panoply of US special tariffs on China because of the trade protection enacted in 2018 (figure 1). Overall, 50.6 percent of US imports from China are covered by one or more sets of duties. Many products are hit with two, or even three, sets of tariffs arising under different laws. 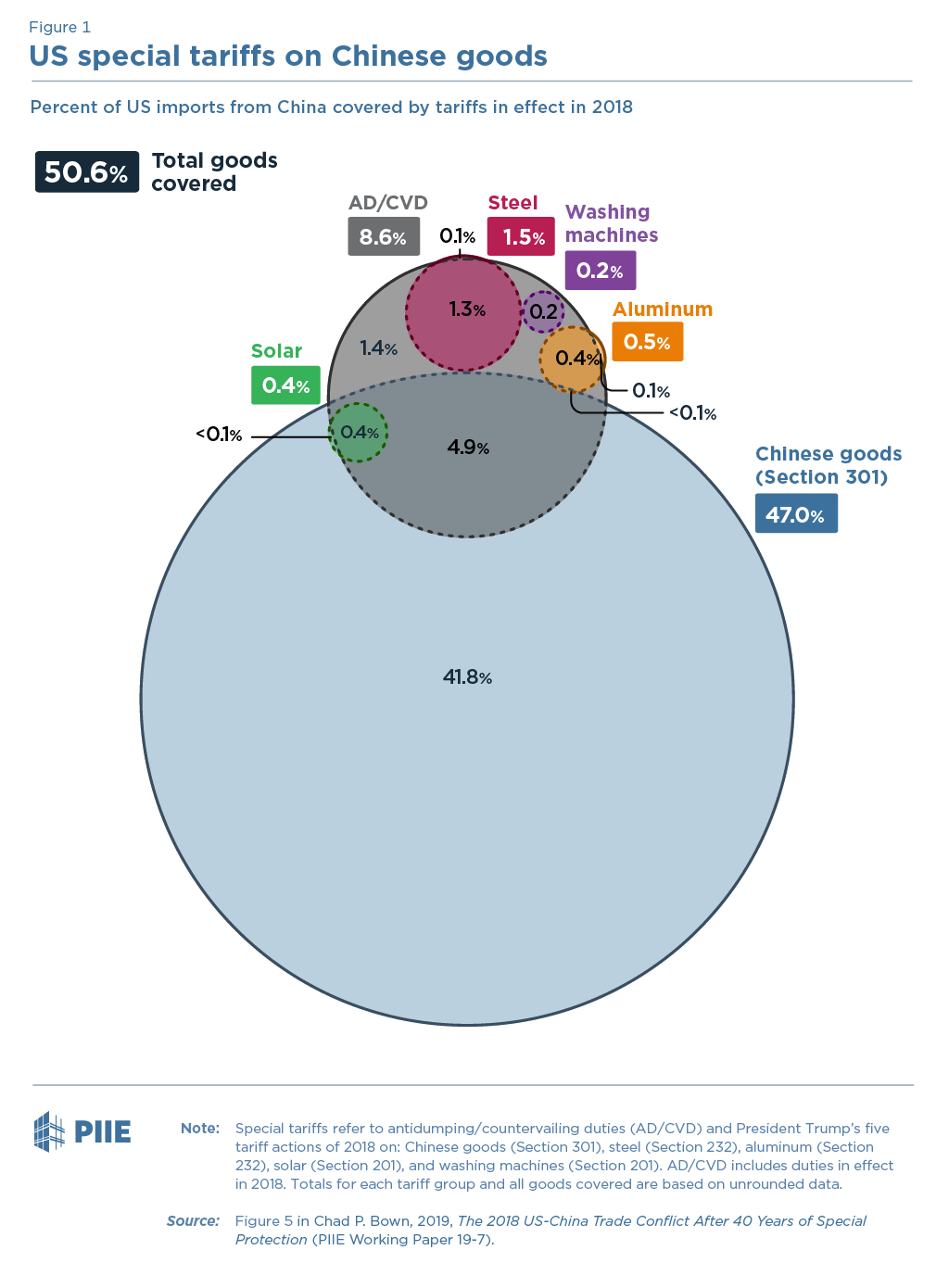 Much of the attention has focused on whether Trump would pull back his tariffs on $250 billion, or 47 percent, of US imports from China. But even if he did, the United States still has other pre-existing special tariffs covering 8.8 percent—or tens of billions of dollars—of China’s exports to the United States.

The real action is in how the Trump-Xi deal affects those other tariffs.

2. A Trump agreement with China will not stop the WTO disputes against his tariffs on steel, aluminum, solar panels, and washing machines.

Any deal will almost certainly require China to drop its WTO challenge to Trump's tariffs on $250 billion of imports. But Trump is also expected to demand an end to China’s disputes over the duties he slapped on solar panels, steel, and aluminum. His 2018 tariffs on those three sectors, as well as washing machines, make up about 2.5 percent of US imports from China (figure 1).

For two reasons, China may agree to drop even those disputes.

First, China has little to gain economically even if it wins the disputes and gets Trump to remove those special duties. The United States has other special protection on the same products Trump targeted (figure 1), and peeling back only one part of the tariff onion is unlikely to restore China’s exports. Giving up those WTO disputes is a freebie for China.

Second, other countries are already battling Trump on those tariffs. Trump’s decision to hit all countries with steel and aluminum protection has resulted in the European Union, Canada, Mexico, and Turkey retaliating with tariffs against US exports. They have also brought forward WTO disputes, and South Korea is leading a similar legal charge against Trump’s tariffs on solar panels and washing machines.

Trump’s shotgun approach of relying on tariffs to deal with the subsidies problem means China can quietly bow out with the appearance of having made a concession. Yet the WTO disputes—and US conflict with other trading partners—will not have gone away.

3. The deal could lock in China’s status as a nonmarket economy and escalate US use of antidumping duties.

China’s legal status as a nonmarket economy is an essential topic of the Trump-Xi negotiations. The nonmarket designation affects how the United States imposes two different types of special tariffs—antidumping and countervailing duties—that combine to cover 8.6 percent of US imports from China in 2018 (figure 1).

Take first the antidumping duty. The United States can use this kind of tariff when imports are sold in the US market for a price that is legally determined to be too low.

China’s current status means the United States can levy more tariffs and at higher rates on China than trade laws permit against market economies. China’s subsidies mean its domestic prices and costs cannot be compared meaningfully to those in the United States. The US “surrogate” approach to comparing prices and costs is to substitute those of a third country that it gets to pick—such as India. Not surprisingly, its calculations result in more duties at higher rates, which China’s exporters dislike.

But tension over this issue is not new and was escalating long before the Trump administration. The amount of trade covered by these US tariffs has been steadily increasing—from 2.2 percent of US imports from China in 2001, when it acceded to the WTO, to 8.6 percent in 2018 (figure 2). 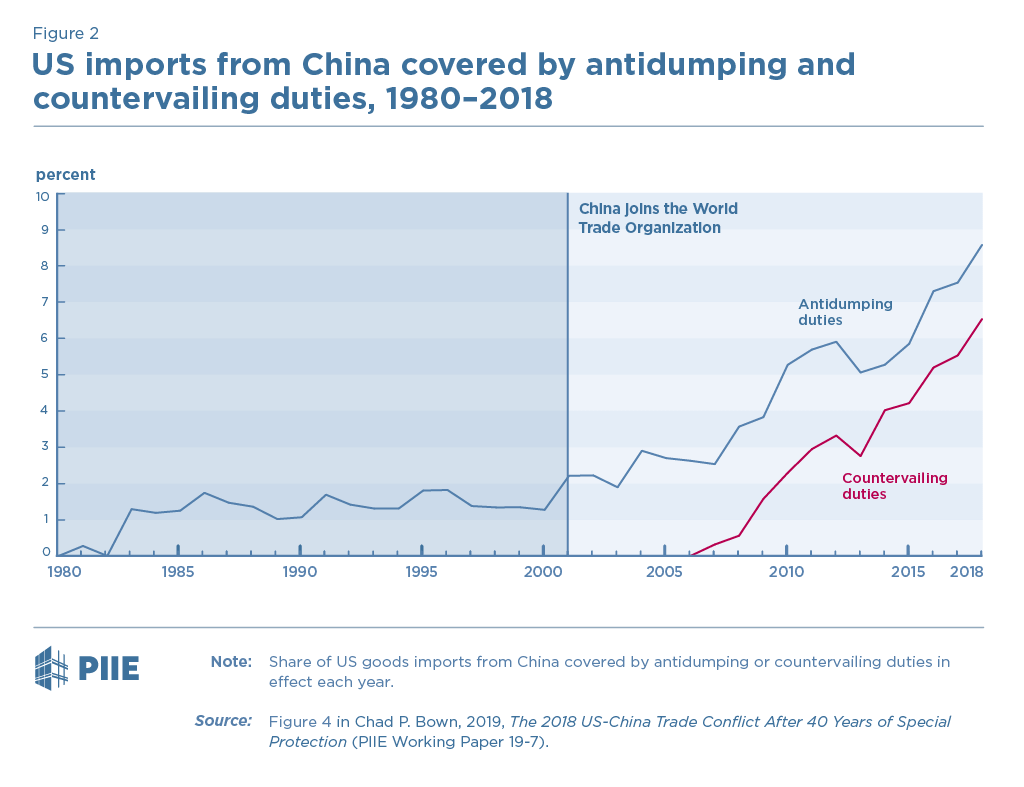 And these US antidumping tariffs on China are high: In 2018, they averaged 151.5 percent. These duties raise the overall average US tariff on China from 3 percent to more than 10 percent.[2]

China was so concerned over its nonmarket economy status that it filed WTO disputes against both the United States and European Union in 2016. While still unofficial, Bloomberg News’s Bryce Baschuk reported that China has lost the WTO dispute it brought against the European Union. However, any WTO decision over US treatment of China as a nonmarket economy is still a ways off.

Yet, as part of the deal with Trump, China could agree to drop the WTO dispute and simply accept nonmarket economy treatment in antidumping cases. Trump wants to keep this practice—it was also on the reported set of US demands from May 2018.

But there are risks. Maintaining China’s nonmarket economy status means an almost certain increase above the 8.6 percent of imports from China currently hit by US antidumping tariffs. Trump’s Commerce Department has been budgeting and staffing up an office dedicated to self-initiate these types of cases. [3]

Unless the underlying systemic concern with China’s economy is tackled directly elsewhere in the agreement, the main result may just be an escalation of US tariffs on China.

4. If China agrees that its state-owned enterprises are “public bodies,” the deal could also increase US use of countervailing duties.

Countervailing duties (CVDs) are a second set of special US protection targeting subsidies likely impacted by a deal. A US regulatory change in 2007 made it possible for the Commerce Department to consider these duties on China for the first time since the 1980s.[4] By 2018, 6.5 percent of imports from China had become subject to these special tariffs (figure 2). To date, all of the CVDs that the United States has imposed on Chinese products also face a simultaneously-imposed antidumping duty.[5]

But China has also challenged US use of these anti-subsidy tariffs through WTO disputes. One of its concerns is the US effort to deem Chinese state-owned enterprises—such as state-owned banks—as “public bodies.” Under the CVD law, this designation means that a bank that subsidizes indirectly, by granting a below-market rate loan, could be treated in the same way as a government that subsidizes directly: The Chinese products that benefit could be hit with a US duty.

The risks are the same as those posed by antidumping and nonmarket economy status. Expect further escalation of US countervailing duties if the substantive element of the deal is China agreeing on the US definition of a public body and not actually curbing its subsidies.

5. Even more critical than the deal itself may be what comes next.

Any Trump-China agreement focused on easing constraints on the US system of imposing special tariffs on China raises important questions.

First, and most important, has China agreed to cut its subsidies and adjust its economic system?

Second, what about the rest of the world? Thus far, the Trump administration has chosen to act alone, despite the European Union, Japan, and many other countries voicing similar concerns about China’s policies. If the United States and China develop new rules, will they somehow be extended to other countries? Expect the European Union to also want the right to impose special tariffs on China under whatever easy conditions the United States negotiates.

The Trump administration may not care about that, but China certainly does. China has known all along that it would face pressure to grant others whatever it allows the United States.

Third, what, if anything, does China receive in return? Will the deal incentivize China to strive to achieve market economy status? Would there be a process to evaluate the progress of Chinese banks and other state-owned enterprises to someday graduate from treatment as public bodies? How will monitoring and enforcement work? How long does each side expect the US-China deal to last?

Without clear answers, the US-China trade war could soon be back where it started. A deal focused on maintaining easy US access to special tariffs, without incentivizing and giving credit to China as it cuts back on its subsidies, would be extremely short-sighted. It would eventually result not only in more US tariffs but resumed conflict down the line.