This post picks up from a previous analysis that examines the link between perceived wage stagnation and globalization. That post shows that increased trade between 1988 and 2008 provided an estimated $720 billion boost to the US 2008 GDP. However, over that same time period, competition from imports and outsourcing suppressed US wages to the tune of $140 billion. The “prosperity” gains resulting from increased competition outweighed the adverse impact on wages, but this does not imply that all segments of the United States benefitted equally. This post explores these figures to estimate globalization’s contribution to US income inequality by comparing how gains and losses are distributed between workers and businesses and between different income groups.

To start, the difference in how two-way trade expansion affected wages and business earnings is calculated. In 2008, wages paid to US workers claimed about 45 percent of GDP, while after-tax net corporate profits (excluding depreciation and amortization allowances) accounted for about 4 percent of GDP, and proprietors’ incomes1 came to 7 percent of GDP.2 For this analysis, the combination of corporate profits and proprietors’ incomes is referred to as “business earnings.”

Based on these assumptions, in 2008, average annual wages received a boost of over $2,000 per worker owing to expanded trade. After subtracting the losses due to increased competition, the net average boost in wages was about $1,000 per worker. Figure 1 provides a visual breakdown. 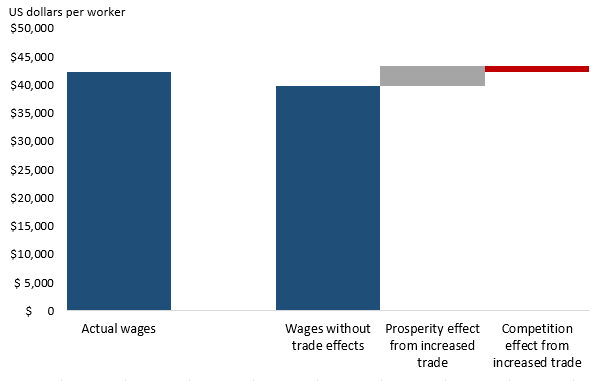 Sources: US Bureau of Labor Statistics and authors' calculations.

It is important to emphasize that if two-way trade had stopped expanding after 2008, the wage gains would nevertheless persist, while the competition losses would gradually fade as workers migrated out of low-paid occupations.

Trade critics often claim that affluent households capture the lion’s share of gains from expanded trade, resulting in a more unequal distribution of income. Figure 2 sets the stage by portraying the shares of household income earned by the top 20 percent of households between 1988 and 2008. The figure shows that the top 20 percent have indeed captured a larger share of the economic pie over the past two decades, confirming an abundant literature. Between 1988 and 2008, the top quintile increased its share of household income from 46 percent to 51 percent. The question to address is how much of the widening inequality can reasonably be blamed on the expansion of international trade and investment. 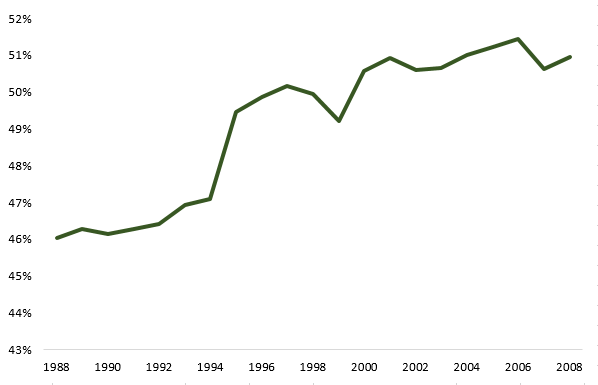 Wage gains generated by trade expansion are then distributed in proportion to each group’s share of 2008 expenditures on a basket of tradable products,6 reported by the Bureau of Labor Statistics 2008 Consumer Expenditure Survey.7 The results of these assumptions are shown in table 1 and portrayed in figure 3 as the changes in the 80/20 income distribution resulting from expanded trade.

In this framework, the top quintile took home about three-quarters of the income gained from trade—a greater slice of the pie than the overall income share of the top quintile. By implication, globalization did contribute to rising income inequality between 1988 and 2008. How large was this contribution? Based on the numbers portrayed in figure 3, the top quintile’s share of household income would have been about 50.4 percent in the absence of the “prosperity” and “competition” effects, whereas the actual 2008 share was 51.0 percent. This difference, about 0.6 percent of household income, accounts for about a tenth of the rise of the share of income captured by the top quintile between 1988 and 2008. 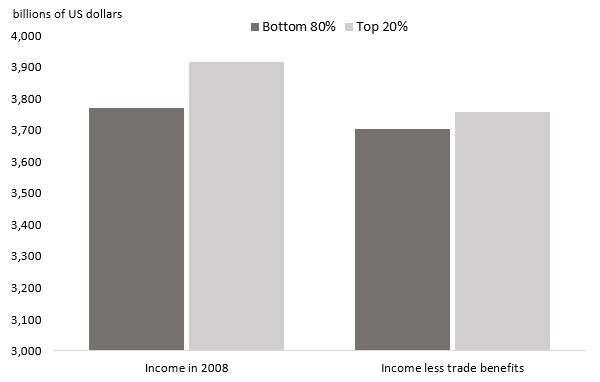 Globalization of the US economy over the past three decades has coincided with slow wage growth and increased inequality, but the contemporary political debate exaggerates the contribution of globalization.

Before 2008, the widening gap between rising real productivity, as conventionally measured, and flat real wages was largely a reflection of the difference in price indexes used to measure “real” productivity and “real” wages. To be sure, the “competition” effects of rising imports and investment abroad exerted a small negative effect on real average wages. But taking into account the “prosperity” effects, globalization made a significant net positive contribution to average wages between 1988 and 2008.

Richer households did enjoy a disproportionate share of benefits from globalization, because of their dominant claim on corporate profits and proprietors’ incomes and the very small impact of foreign competition on the wages of highly skilled workers. Even so, the globalization boom cannot explain 90 percent of the rise, between 1988 and 2008, in the share of household income captured by the top 20 percent.

1. Proprietors’ incomes cover the earnings of unincorporated business, such as sole proprietorships and partnerships. This analysis assumes these earnings predominantly accrue to the top 20 percent of households.

2. The remaining 44 percent of GDP was claimed by other forms of compensation and operating surpluses, taxes on production and imports, and depreciation of fixed capital.

4. This approach assumes that none of the business savings associated with lower labor costs were passed on to consumers in the form of lower prices. This is an extremely simplistic view.

5. Most corporate profits are retained by business firms and reinvested in their operations, while dividends that are paid to pension and insurance plans are not realized as current money income by households.

7. The top 20 percent were responsible for 35.7 percent of such consumption expenditure, leaving 64.3 percent for the rest. Before the competition effect, these gains would account for about 3 percent of the top quintile’s income and 6 percent of income for the remaining 80 percent. The fact that poorer households see a greater relative gain is consistent with recent economic studies. Fajgelbaum and Khandelwal (2014) found that the poorest US decile could attribute an amazing two-thirds of its real income to the benefits of trade through lower prices, compared with 37 percent at the median income decile, and only 4 percent for the top decile.