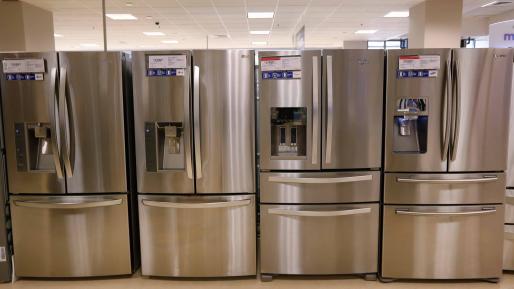 The Trump administration’s long and detailed list of Chinese products on which it soon plans to impose 25 percent tariffs raises tough challenges for the companies affected: How do they find alternative sources for the intermediate inputs and capital equipment making up 95 percent of the Chinese products targeted?

US companies need these inputs to remain competitive in the global marketplace, so how they answer the question can be a matter of life or death for them.

It turns out that companies often do have alternatives—but many of these goods would be imported from other countries, obviously not affecting the trade deficits that President Trump deplores. Some alternatives are of higher quality and, thus, more expensive. Others are less expensive but of lower quality. To the extent that US companies are able to purchase intermediate inputs similar to those they currently import from China, disruption to American assembly lines and price hikes for consumers will be lessened.

The analysis presented here looks at all sources of US imports of products on the Trump team’s June 15 list (the underlying data are presented here). The data show that American firms do import these goods from multiple sources. Figure 1a shows the sources of US imports of the products subject to the proposed tariffs. China supplies only a small portion, 8 percent, of the overall imports of products targeted by the Trump tariffs. Figure 1b provides import shares of goods not targeted by the proposed tariffs. China provides a much larger share of this import bundle, 27 percent. Thus, China supplies a smaller share of targeted imports than of nontargeted imports. Even if a larger weight is placed on products that are most important to the bilateral flow, China’s weighted average share of targeted imports is only 22.8 percent. However one looks at the data, China’s share of targeted imports is relatively low. Alternative suppliers for the targeted products do exist.[1] 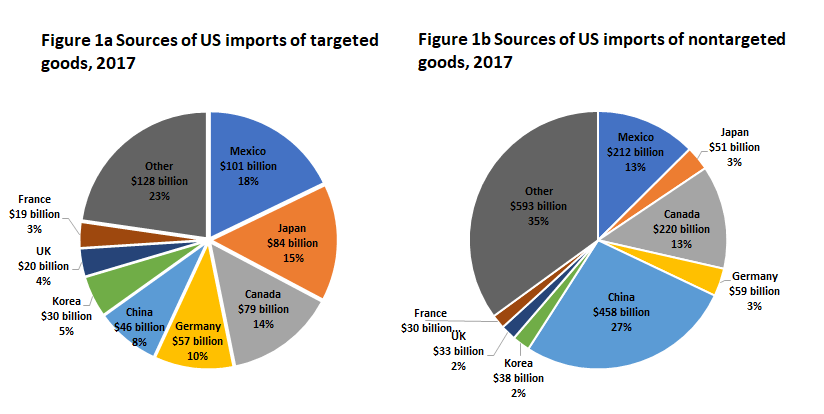 Note: These figures present import shares calculated as the sum of all targeted (nontargeted) goods imported by the United States from a given country divided by total US imports of those goods from the world. Source: Author's calculations using data from the US International Trade Commission.

But while a rose is a rose is a rose, not all products are the same, even at the disaggregated level of the latest tariff list. Product quality varies widely across countries. Advanced economies tend to export goods with higher unit values[2] than those from less developed countries, even within the same customs code. A snowboard made in China does not have the same quality (or retail price) as one made in Switzerland. When tariffs force companies to buy inputs from costlier suppliers, consumers of lower-quality products are likely to take the biggest hit to their wallets.

Two products from the June 15 list are examined here to illustrate the point that some Chinese products cannot be seamlessly replaced by turning to other suppliers. One product from each of two targeted sectors is examined here, computer and electronic products and machinery.

The first is electronic integrated circuits, not elsewhere specified (Harmonized Tariff Schedule [HTS] code 85423900), which make their way into various electronic gadgets. China supplies only 8.6 percent of US imports in this category. Taiwan supplies 20 percent, Korea 16.9 percent, and Malaysia 16 percent. Figure 2 shows the unit value of these chips, with Korean chips having 12 times the value of those from Taiwan and Malaysia. All three countries supply chips that are more expensive than China’s. These relative values tell us two things about the options open to American companies currently using Chinese chips. First, alternative chips are of higher quality than the imported Chinese chips and, thus, unlikely to be perfect substitutes in production. However, the price differential between Chinese chips and those from Malaysia and Taiwan are small enough that firms may divert their purchasing away from China without a large increase in the price of the final good. 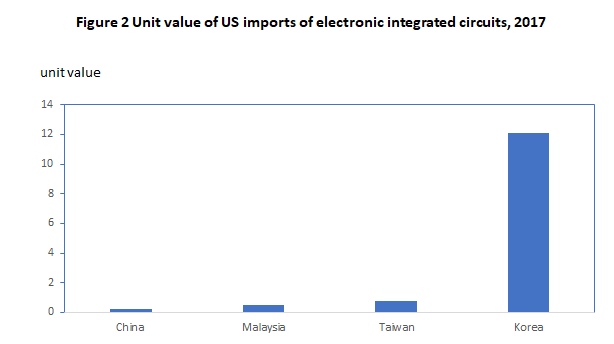 The second product examined is heat exchange units (HTS 84195050), which are widely used in heating and refrigeration, among other uses. China supplies only 15.7 percent of US imports of this product. Germany supplies 11.5 percent of US imports, followed by France (9.0 percent) and Mexico (8.6 percent). 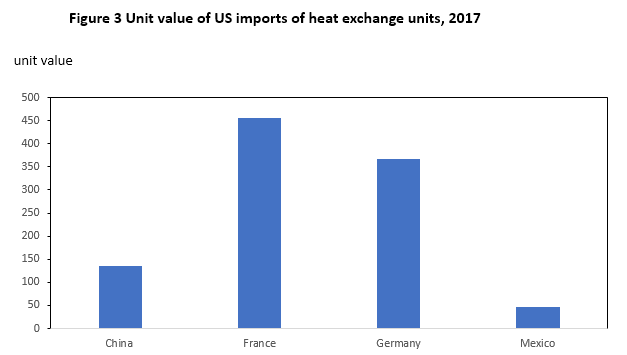 For some applications, cheaper Chinese inputs are appropriate and desired. For other uses, higher-quality inputs are used to produce higher-quality (and more expensive) final products. Alternative sources do exist for most of the Chinese products on the targeted list, but less expensive products purchased by less affluent consumers are likely to see larger price hikes as manufacturers substitute more expensive parts for Chinese inputs facing tariffs. These consumers may not see much difference in performance due to one higher-quality part, but they are likely to see a difference at the cash register.

1. Some products on the list are imported only from China and finding alternative suppliers for these products may be impossible.

2. Unit values are calculated by dividing the total value of imports by the number of imported units. Such measures make sense when the referenced products are similar, as in 8-digit customs categories used here.