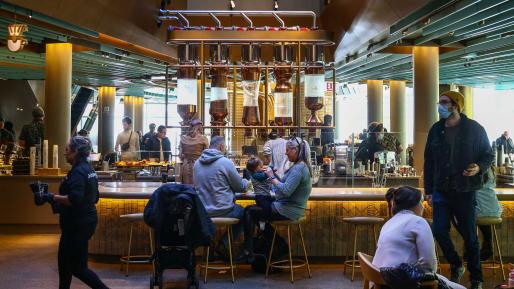 The pace of nominal wage or compensation growth over the last six months is generally consistent with about a 4.5 percent inflation rate. The latest data suggests that productivity is largely on track with where it was prior to the pandemic with some downside risk that could put additional upward pressure on inflation. Moreover, the growth of labor costs has largely tracked price growth, so there is little reason to believe that business margin compression will meaningfully lower inflation without a slowdown in compensation growth or that real wages will easily return to their previous trajectory.

Over longer periods of time there is a close link between hourly compensation growth and price growth as shown in figure 1. Two factors can break the link between nominal wage growth and price growth. The first is productivity. If people are paid 3.5 percent more but they can produce 1.5 percent more per hour, then unit labor costs, the labor costs per unit of output, go up only 2.0 percent and the business only needs to raise prices at this pace to maintain constant profits (setting aside nonlabor costs). This is why the price growth shown in figure 1 was generally below compensation growth.

The second is profits themselves. In this same example, if businesses raise prices only by 1.5 percent, they will be absorbing some of the wage costs through lower profits. Conversely, profits will increase if they raise prices by more than 2.0 percent. Although the profit share does move over longer periods of time, in general, it makes sense to think of it as not constantly and strongly moving in one direction. If anything, the best assumption is usually that the profit share is as likely to rise as to fall.

Another way to think about this relationship is that faster nominal wage increases support faster nominal consumption increases. Some of this increased consumption can be satisfied by more productive workers. But given supply constraints, higher demand is only partially met by higher real output and price inflation results.

Over the last six months, nominal compensation or wages have been running about 1 to 3 percentage points above their pace in the run-up to the pandemic. If compensation continued to grow at this pace for the next several years, it is very unlikely that inflation would fall to the Federal Reserve’s 2 percent target, and probably not even to a 3 percent target that could be an appropriate end place for monetary policy.

Assuming underlying productivity and profit trends are the same as they were from 2000 through 2019, table 1 shows the core PCE inflation rates (the Federal Reserve’s de facto target) that would be consistent with different measures of the recent pace of compensation or wage growth. The Employment Cost Index (ECI) is the best measure of these and suggests that wage growth is consistent with 4.4 to 4.8 percent annualized inflation. The other measures are broadly consistent with the ECI data, ranging from 2.9 to 5.1 percent. (The differences in the pace of wage and compensation growth across the different measures reflect conceptual differences in the measures and their different historical relationships to price growth.)

In every case the inflation rate is lower than the growth of wages or compensation. This is because productivity growth enables firms to increase pay faster than prices while maintaining a constant profit rate. The differences between the wage and price measures also reflect other factors, like different sectoral coverage, compositional change issues, and also historical trends in other factors like the profit share. Moreover, all of the wage and compensation measures are subject to measurement error, which is one of the big reasons that their prediction of inflation ranges from 2.9 percent to 5.1 percent.

Overall it is reasonable to expect that if this pace of wage or compensation growth continued on a sustained basis (something that is not likely to happen given recent developments in the labor market and current monetary policy, as discussed more below), the inflation rate would be about 4.5 percent.

Table 1 assumes that wage increases will translate directly into price increases in the same manner they did in the decades leading up to the pandemic. The fact that unit labor costs have roughly tracked price growth suggests that there is little reason to expect a systematic deviation from the historical pattern. The larger threat to inflation over the next few years, however, is the possibility of lower productivity growth.

Some analysts have expressed the hope that the recent fall in real wages means that it is likely that nominal wage increases could occur without increasing pressure on prices—real wages would just return to their previous path. Others have made the related point that business margins in some industries have widened, and, to the degree they compress going forward, that would lead to substantially lower inflation even without much lower wage growth. Either of those developments would be welcome for workers and for inflation. Unfortunately, the productivity data does not give much reason to expect this will happen.

Specifically, as shown in figure 2, unit labor costs have increased 13.4 percent since the end of 2019 (18.0 percent higher hourly compensation offset by a 4.0 percent increase in productivity), while nonfarm business prices have increased 12.7 percent. (The increases are also similar when productivity is adjusted to match GDI.) The fact that the two have roughly tracked each other suggests little reason to believe that they are outside of their normal relationship, and thus there is little reason to believe that price growth will slow below what would normally be predicted by the pace of compensation growth.

Productivity Growth Is Consistent With Its Pre-pandemic Trend, But Will That Last?

Since the pandemic there have, however, been wild oscillations of productivity growth. In 2020, productivity growth was extremely rapid as firms shed workers more quickly than they shed output. In 2022 the opposite dynamic has been at play with productivity falling at a 3.2 percent annual rate so far this year, the biggest three-quarter decline recorded. Preliminary indications suggest that productivity could fall further in the fourth quarter, which could move productivity below the pre-pandemic trend.

This recent dramatic decline in productivity is unlikely to represent a genuine worsening of technology and the ability to translate inputs into outputs. Instead, it is more likely a residual phenomenon that includes a degree of mean reversion from the unusually strong productivity growth in 2020. In both the rise and the fall, a lot of the change in productivity was probably residual in the sense that output and employment each had their own dynamics—and adjustments in work intensity bridged the gap between them.

Productivity is a very noisy series, and so it does not make sense to make a large update of expectations based even on nearly three years of data—especially in a period as unusual as what the economy has been going through. Nevertheless, the recent declines, plus the possibility that productivity will fall again in the fourth quarter, suggests that at least some concern about the future path of productivity may be warranted. This could be because of the efforts that businesses made to harden their operations against COVID, the continued disruptions from COVID, the foregone investment and R&D in recent years, or the possibility that work-from-home is less productive.

What Could Bring Inflation Down?

Recently, core PCE inflation has been running at about a 5 percent annual rate. A lot of transitory factors have been affecting that price growth in different ways. Looking at wages or compensation strips through those different stories and gets to the heart of the macroeconomic determinants of inflation.

The labor market perspective suggests that underlying inflation is tracking at about a 4.5 percent rate—with little hope that productivity or factors like margin compression will improve on the historical relationships on which this estimate is based.

The labor market, however, has gotten somewhat less tight. Job openings and quits are both well above their pre-pandemic rates but have fallen somewhat from a few months ago. Moreover, it appears as if nominal wage growth has been slowing slightly, something that is clear from the high-quality Employment Cost Index series for private wages excluding the volatile incentive-paid occupations as shown in figure 4. To the degree that wage growth continues to fall, then one would expect that price growth would also fall. 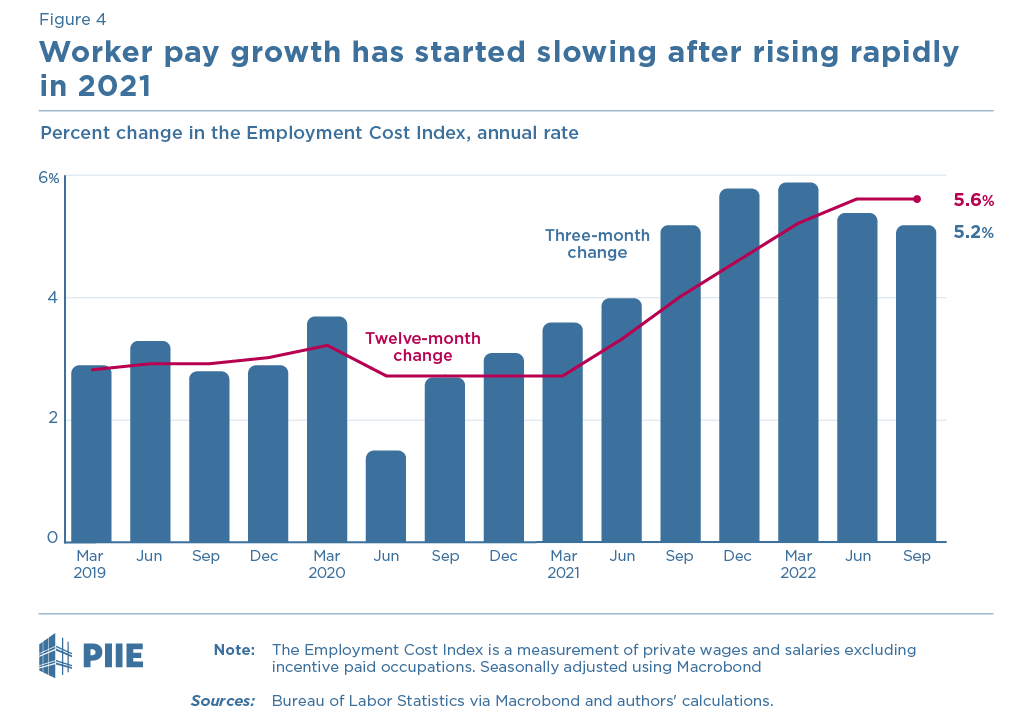 Big questions, however, remain. Will the labor market continue to loosen on its own without much of an increase in unemployment? How quickly will wage growth slow? And, how much will slower wage growth translate into slower price growth? Given the magnitude of the issues, it is unlikely that we will see inflation much below 3.5 percent in 2023.