Why Slowing World Trade-to-GDP Need Not Cause Worry

In a recent post, Gavyn Davies worried about the slowdown in the ratio of world trade-to-GDP, arguing that this slowdown represented a potential drag on future growth dynamism. Paul Krugman responded: "Ever-growing trade relative to GDP isn't a natural law, it's just something that happened to result from the policies and technologies of the past few generations. We should be neither amazed nor disturbed if it stops happening."

But there is another very important reason not to read too much into the slowdown in the ratio of world trade-to-GDP. As we show in our recent paper, some substantial part of the rise in the ratio since the mid-1990s is due to convergence, namely poorer countries catching up with rich countries. Convergence distributes world output more equally: It is as if there are more countries in the world and hence more trade. As a result, the trade slowdown may be caused more by a slowdown in convergence than by rising trade barriers.

We reproduce a chart (figure 1) from our paper that illustrates this feature and that updates a calculation made in Krugman (1995). The basic gravity theory of trade implies that smaller countries tend to trade more than larger ones.1 A world of two equal-size countries will experience more trade than a world in which the larger country accounts for 95 percent of world output. Over time, the world is becoming less unequal in terms of the distribution of the underlying output that generates trade.2 For example, between 1970 and 2000 the world constituted about 7.0 to 7.5 country-equivalents (with fluctuations). Since 2000, as more countries have started catching up with the rich, world output has become more dispersed: Today, it is as if there were 12 country-equivalents in the world. Roughly a third of the increase in trade can be accounted for by this democratization of world output. 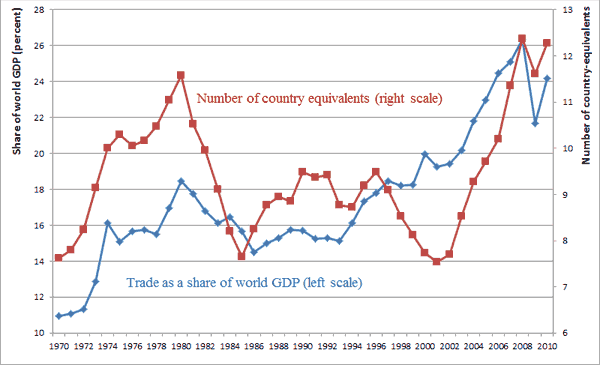 Gavyn Davies worries about the impact of trade on GDP. But there is a reverse impact from GDP to trade at the world level. If world trade-to-GDP declines, it could be as much due to convergence slowing down (which might be an independent cause of worry) as due to any impact from trade on growth.

From the perspective of growth, we should worry about the rise of policy actions to raise trade barriers. Here there has been much more good news than bad. The United States, Europe, and Japan have faced large structural shocks in the form of surging imports from developing countries, especially China. They also experienced a major cyclical shock in the form of the Great Recession. Yet, they have not imposed significant trade barriers, which augurs well for developing country exports in the future (see here and section 4 of our recent paper). And with the launch of new trade initiatives in Asia (Trans-Pacific Partnership) and Europe (Transatlantic Trade and Investment Partnership), and the tantalizing prospect of significant reforms by China, the momentum could be moving back in favor of further market opening.

1. The gravity model of trade is theoretically well-established and empirically validated. It shows that trade between two countries is proportional to their economic size and inversely proportional to their distance. Other things equal, a large country will trade more than a small one but will be less open (trade/GDP will be smaller).

2. As Anderson (2011) shows, in a world without trade frictions, the share of trade in world output is given by

where bj is the share of a country in world output. Inverting the expression gives the number of country-equivalents in the world, which increases with convergence. Baier and Bergstrand (2001) find a statistically significant effect of convergence on trade.

Do DSGE Models Have a Future?

How Emerging Markets Can Get Their Mojo Back