President-elect Donald Trump has adjusted his campaign pledge to make Mexico pay for building a border wall and now plans to ask Congress for funds to build the wall first—and then get Mexico to reimburse the cost. Mr. Trump claims that he can force Mexico to reimburse the United States by “blocking transfers and remittances.” There has been little detail about how this might be achieved, but attempting such a gambit would almost certainly backfire on the United States as well as Mexico.

One possibility for Trump is that the United States would tax remittances from Mexican workers directly. But such a plan, even if it were feasible, could ultimately hurt the US economy in a number of ways, including through a direct impact on US exports to Mexico.

Remittances typically take the form of cash sent by immigrants to support their families in their native countries. Although estimating the exact size of remittance flows is difficult because many transfers take place through unofficial channels, studies by the World Bank and the International Monetary Fund have documented that these flows have been growing rapidly among developing countries in the past few years. In the case of Mexico, registered remittances have increased almost sevenfold over the past decade, as the figure below shows. As has been the case elsewhere, remittances are an important source of income for the Mexican economy—they overtook oil-related export revenues in 2015 and 20161—and for households in particular. On average, remittances account for about 2 percent of Mexico’s GDP. 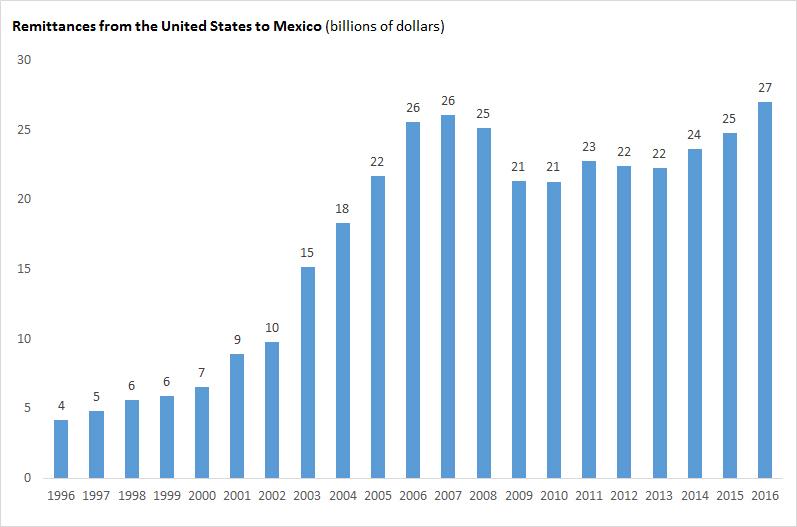 Source: Central Bank of Mexico; data for 2016 is based on remittance flow estimates for December.

The projected remittance acceleration in 2016 shown in the figure reflects a sharp increase in November2 connected to the US presidential election result, the peso plunge associated with anti-Mexican rhetoric and criticism of the North American Free Trade Agreement (NAFTA), and fears that the incoming administration may attempt to tax or restrict remittances. The Central Bank of Mexico expects that those trends probably continued in December, setting a historic record in transfers from Mexican immigrants based in the United States.

If the incoming administration decides to tax Mexican remittances to pay for the wall, it will likely face a number of problems. On the one hand, remittances are not easy to tax—attempts to do so would lead to transfers through unofficial channels to avoid the tax. On the other hand, immigrants could choose to significantly reduce remittances. If the flow of registered and potentially taxable remittances drops sharply because transfers are no longer flowing through official channels, expected revenues from this policy would fall short of reimbursement needs for the wall. More importantly, however, if Mexican households are no longer getting the income boost from remittances either because relatives and friends in the United States are sending less to Mexico or because this money is being taxed, consumption would fall. A drop in Mexican household consumption would surely affect US exports, particularly as Mexico is the second largest destination for US goods.

Over the past two decades, the economies of Mexico, the United States, and Canada have become increasingly intertwined largely as a result of NAFTA. The remittance conundrum associated with “funding the wall” is yet another reminder that policies that choose to ignore the intricate connections that bind these economies may end up having significant adverse consequences for the United States itself.

1. According to the latest balance of payments data compiled by the Central Bank of Mexico.

Can Mexico Retaliate Against US Trade Actions?