The labor market improved in February 2021 as employers added 379,000 jobs, leaving the economy at 11.9 million jobs below its pre-pandemic trend. At the same time the unemployment rate fell to 6.2 percent. Throughout the pandemic the official unemployment rate has been kept down by a misclassification error and the unusually large withdrawal of millions of people from the workforce. Our estimate of the realistic unemployment rate for February was 8.2 percent, a concept that adjusts for the unusually large decline in participation as well as changes in demography and is designed to be historically comparable to the official unemployment rate, which reached a maximum of 10.0 percent in the 2007–09 financial crisis. Another concept, the fixed participation rate unemployment rate, cited by Federal Reserve Chair Jay Powell and Treasury Secretary Janet Yellen, was 9.5 percent; the comparable concept peaked at 11.8 percent in the financial crisis.

The headline unemployment rate was 6.2 percent in February, down slightly from 6.3 percent in January. This concept works well in normal times but has had some deficiencies in the context of the pandemic. In response to these unique circumstances, we have been publishing monthly updates since June tracking what we call the “realistic unemployment rate” as shown in figure 1. 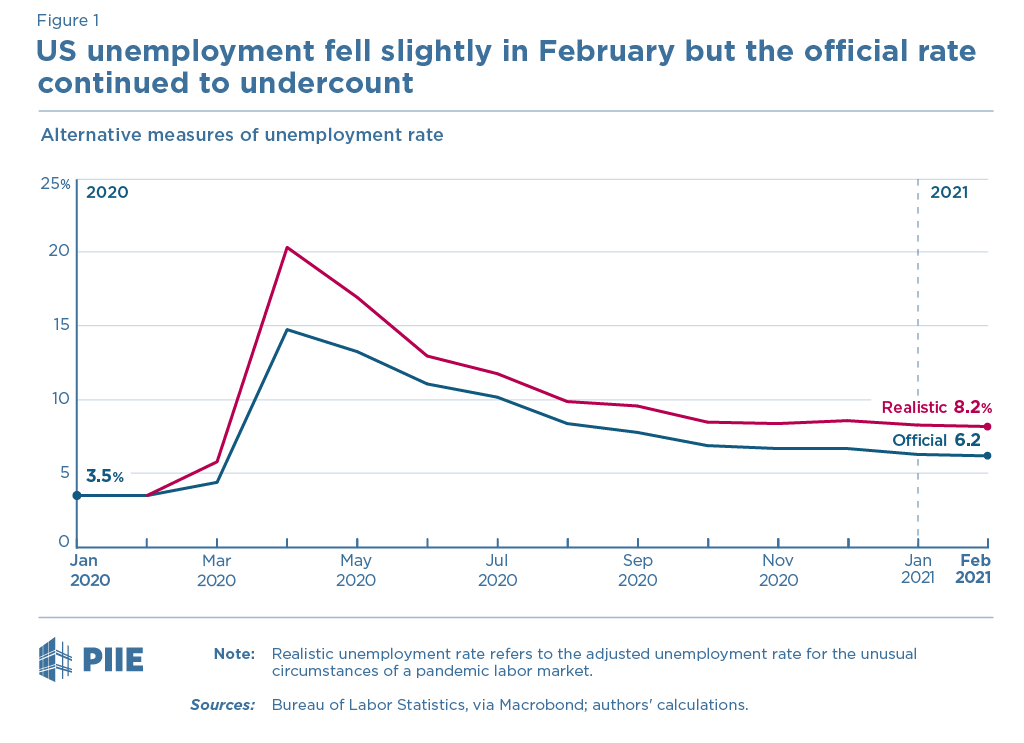 The realistic unemployment rate adds 757,000 workers who reported being “not at work for other reasons” as unemployed and also adds 2.6 million workers to the labor force to reflect the fact that the decline in labor force participation has been unusually large, even conditional on the overall economic weakness and adjusted for changing demographics (note that this is only a portion of the 4.2 million workers who have left the labor force since February 2020). This measure was 8.2 percent in February and is intended to be historically comparable to the official unemployment rate. The February value represents a continuation of January’s improvement, but at a slower pace. After falling rapidly over the summer, improvement has been more modest since the fall.

As the unemployment rate remains elevated, the employment-population ratio is 3.5 percentage points below its pre-pandemic value 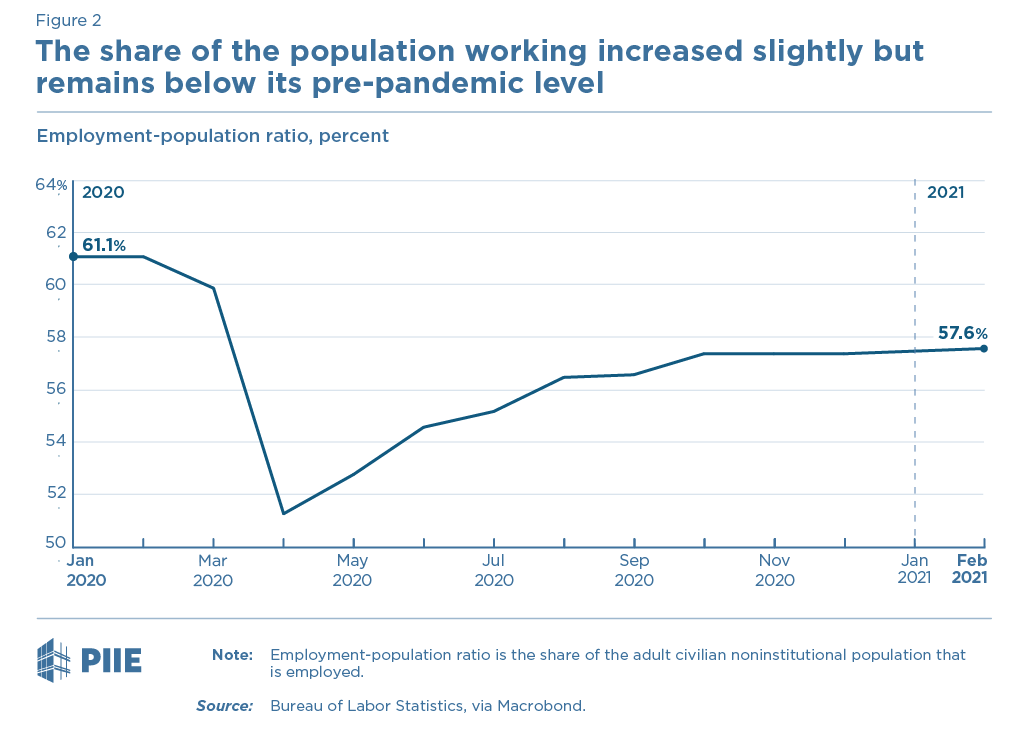 Overall employment is 7.7 percent below its pre-crisis trend with increased hours per worker making up a small portion of that decline

The job market bottomed out in April 2020 but has made gains since then. The initial recovery was very rapid as workers were recalled to their previous jobs, but job growth has slowed in the last six months. As a result, today total nonfarm employment is 7.7 percent below its pre-pandemic trend, corresponding to 11.9 million jobs.

At the same time average weekly hours for private workers have risen from 34.4 hours in the year before the pandemic to 34.6 hours in February—a 0.7 percent increase. This is very unusual as average weekly hours generally decline in recessions. In part the increase in hours is a compositional effect as employers have shed lower-hour jobs, but it also appears as if hours have risen for many workers.

As a result, aggregate weekly hours have fallen 7.2 percent from its pre-pandemic trend. This is larger than what was likely about a 4 percent reduction in output relative to trend in February, likely because the job losses have been disproportionately in lower productivity sectors. 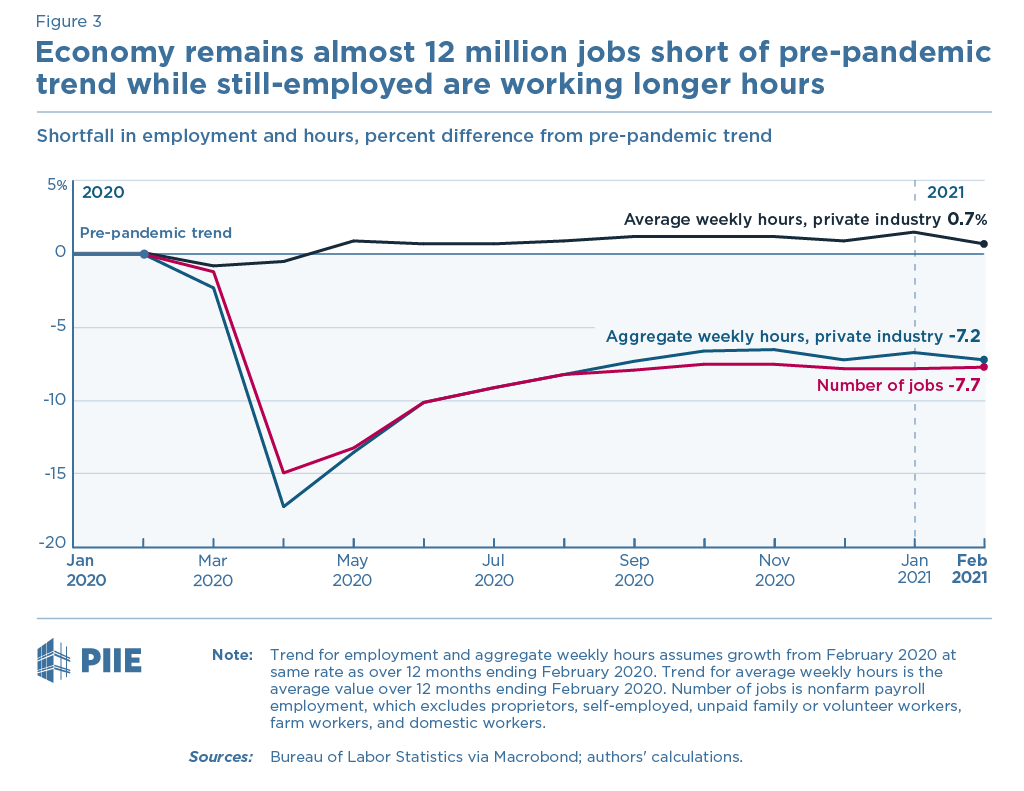 The future prospects of the labor market will depend on the trajectory of the virus, the future policy response, and how many people without jobs can quickly connect with their old jobs instead of undertaking the time-consuming process of finding a new job, or even a job in a new industry. Virus cases, hospitalizations, and deaths continue to fall while vaccination is picking up pace. The COVID-19 relief included in the December Consolidated Appropriations Act has contributed to rapid increases in consumption so far this year.

If the virus is brought under control and the US Congress passes something like the $1.9 trillion American Rescue Plan is passed, the economy would have sufficient aggregate demand to support rapid growth in 2021. This demand would be satisfied by putting millions of workers back to work and bringing millions more back into the labor force.