The impasse in Congress over renewal of the expiring programs that mitigated the economic impact of the COVID-19 pandemic threatens to undo the stimulus effect of the programs and exacerbate the economic damage from the lockdown. President Donald Trump has issued executive orders to provide some assistance to families, including $400 per week of additional unemployment benefits (down from $600, which officially expired on July 31), with states asked to fund a quarter of the benefit.[1] His actions have been criticized as inadequate and potentially illegal. The current Democratic proposal is for $3.4 trillion in support for firms, labor, and households, and the Republicans have proposed $1 trillion. Any compromise is likely to result in significant cuts in the current levels of support for households through less generous unemployment benefits and less direct income transfers. The president’s executive orders include such cuts, as do the Republican proposals.

To illustrate the potential macroeconomic impact of lowering support, we assume that direct aid to households will fall by $500 billion. We estimate that the impact would be a deeper recession, a loss of GDP of 4 to 5 percent, and an associated 4 to 5 percent increase in the unemployment rate.[2]

The original COVID-19 assistance programs served two purposes: first, they provided support to industries, workers, and poor households directly affected by the lockdown; and second, they sustained consumer spending that stimulated the rest of the economy and helped keep it functioning. The assumed $500 billion fall in household income support from the levels in those programs would represent “destimulation” and generate indirect negative effects that reverberate across the economy.

We consider the impact of two scenarios: first, a cut in household income support of $500 billion; and second, a cut in household income support of $500 billion plus an induced cut in aggregate investment of 5.2 percent. The second scenario, which combines a cut in aggregate investment associated with the GDP decline, assumes that industries cut back on investment projects in reaction to the general economic decline. The two scenarios provide a likely range for the negative outcomes of destimulation. The results are shown in the table below.

The scenarios considered here do not take into account other potential policy choices that may lead to outcomes such as massive evictions, increased bankruptcies, and layoffs of state/local government workers. These shocks would be independent of the macroeconomic destimulation and would further exacerbate the impact of the COVID-19 pandemic on the economy and public health.

US policymakers should at least maintain the earlier levels of income support to prevent further induced economic damage. In the current depressed state of the economy, destimulation is a very poor policy choice.

Drop in direct income support will reverberate across the economy

The $500 billion direct cut in household income ripples through the economy, cutting demand, which, in turn, leads to reduced production, higher unemployment, and further loss of income. These indirect links lead to a multiplier effect, as shown in the table. The total loss of household income would be 1.91 to 2.22 times the direct loss of $500 billion, or $955 billion to $1,110 billion—about $1 trillion. 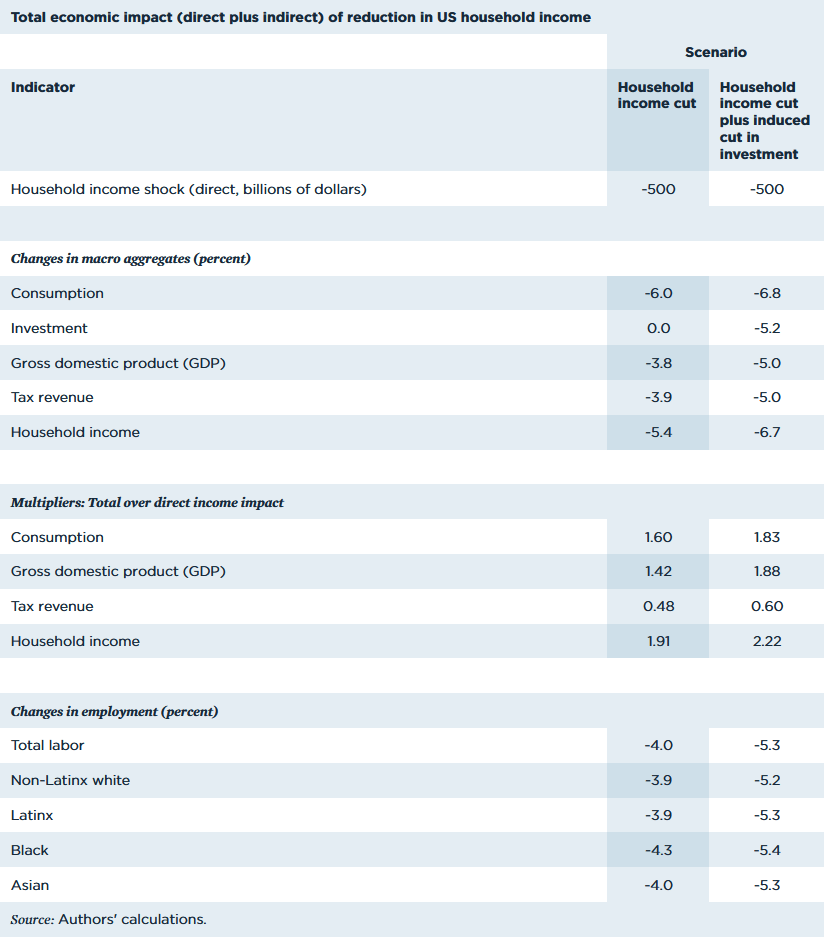 The simulation model we use is based on multisectoral data, working with 184 industries and 9 household types, and captures the circular economic links from final demand to production to payments to factors of production (labor and capital) to incomes and finally back to demand (consumption, investment, government, and exports). The data for the model are organized in a social accounting matrix (SAM) that integrates the national income and product accounts with data on interindustry flows that describe supply chains from intermediate inputs to production for final demand. SAM-based simulation models are widely used in economics, with a long history of policy-focused scenario analysis. The SAM multiplier model used for this analysis is a short-run model that assumes that quantities of demand, production, and employment will adjust to the lockdown, with no changes in wages and prices.[3] This fixed-price model is appropriate when analyzing COVID-19 lockdown shocks that have hit with astounding speed and spread across the economy.

In other work using this SAM multiplier model, analysis of the impact of lockdown policies shows that the most damaged sectors are contact-intensive either in output (services) or workplace environment. Employment in these industries is heavily weighted toward unskilled labor from minority groups, which have been hit hardest by the COVID-19 pandemic and lockdown policies.[4] The impact of a destimulation policy differs—its effects are spread more evenly over the entire economy. As shown in the table, the employment losses are similar across labor categories, roughly equal in percentage terms to the hit on GDP.

The multiplier results in the table indicate that for every $100 billion of household income that is cut directly, aggregate consumption falls by $160 billion to $183 billion, GDP by $142 billion to $188 billion, total household income by $191 billion to $222 billion, and tax revenue by $48 billion to $60 billion. The smallest multiplier is for tax revenue and indicates that destimulation will provide only limited help for government finances—the net effect is that about half the savings in reduced program costs are offset by losses in government revenue. These multipliers provide a quick way to determine the effects of measured changes in household support that are finally decided.

2. In a New York Times article on August 6, 2020, Paul Krugman, without discussing the magnitude of the income shock, suggests that the result could be a 4 to 5 percent fall in GDP from its current depressed level.

3. In the longer run, as the recovery unfolds, one would expect markets to work normally, with changes in prices driving the adjustment process. In this case, market simulation SAM-based models that explicitly include price-sensitive demand and supply behavior are appropriate. There is an extensive literature on computable general equilibrium (CGE) models, which are widely used when the focus is on the simultaneous operation of linked markets clearing through changes in wages and prices.

4. See Hinojosa and Robinson (2020) for an analysis of the impact of the pandemic crisis on the economies of the United States, California, and Los Angeles County using the same SAM multiplier model. The same model was also used to estimate the impact on the US economy of deporting foreign students; see Robinson et al. (2020).

Biden’s Stimulus Should Stay the Course