The US dollar strengthened in the COVID-19 crisis like it did in the last global financial crisis (figure 1). Now like then, this strengthening is generally explained by the fact that global safe assets are denominated in the safe haven currency of the US dollar. The demand for safe assets increases in a crisis, leading to an appreciation of the dollar, exactly when the US economy would need a depreciation. This phenomenon has been called the dollar’s “exorbitant duty” that comes with serving as the global reserve currency, a counterpart to the “exorbitant privilege” that the United States enjoys in normal times from its ability to borrow abroad at a low interest rate. 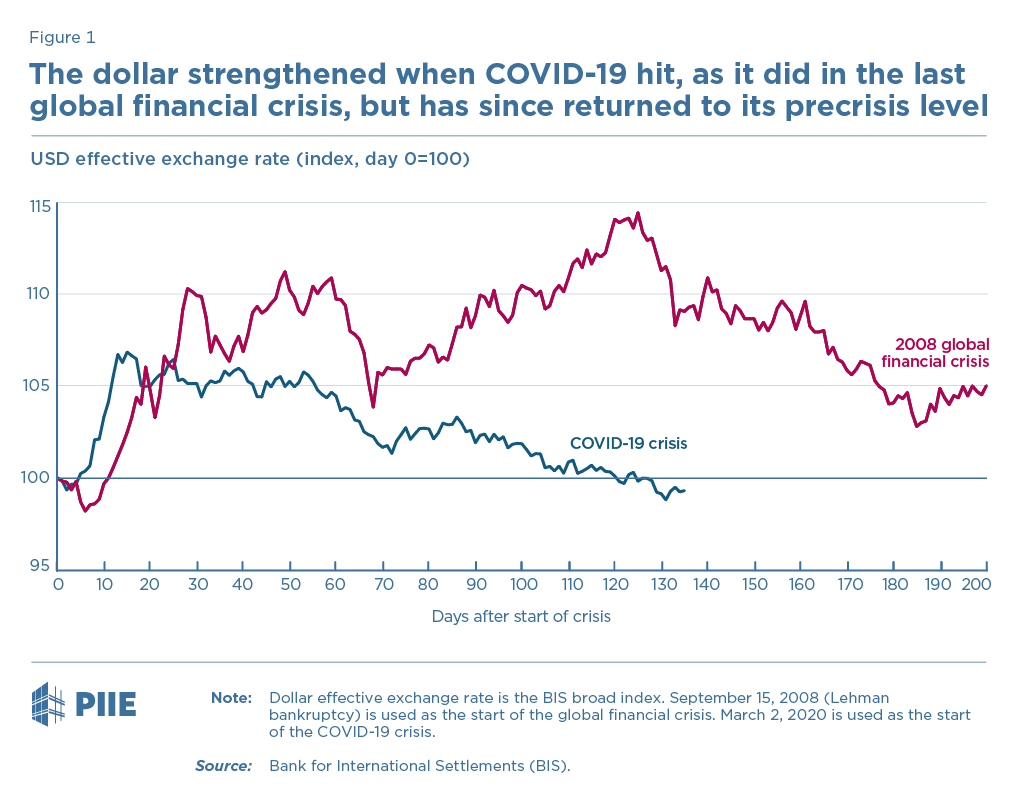 There is an interesting difference between the two episodes, though. In the current crisis the dollar appreciation was quickly offset by a subsequent depreciation, so that the dollar is now already back to its precrisis level. The recent depreciation of the dollar is often attributed to the failure of US authorities to contain the pandemic. However, the last global financial crisis originated in the US financial system, and one could have made an equally strong case that the dollar’s strength should have been short-lived then as well. Has the dollar’s exorbitant duty become lighter since the global financial crisis?

To answer this question we put the US dollar’s experience in the context of the broader cross-country relationship between the COVID-19 shock and exchange rates. We look for—and find—a significant relationship between the extent of COVID-19-related deaths and effective depreciation of the currency in a sample of 36 economies for which data are available. We then ask the question whether the dollar has behaved in line with the cross-country pattern or whether it has depreciated less than warranted by the US COVID-19 situation.

We ran univariate regressions and compared them in terms of statistical significance and explanatory power (it seemed difficult to run horse races given the number of observations). We found that the coefficient on COVID-19 measures was negative in all cases but was statistically significant only when we used the measures related to the end of the period (August 2020). Furthermore, deaths were more significant and had more explanatory power than cases. It could be that end-of-period death rates are more indicative of the countries’ ability to contain the pandemic and limit the economic consequences of lockdowns.

Our preferred regressions are reported in the table. We report the regression results for both the full sample of 36 economies and for the Group of Twenty (G20) economies to make sure that our results are not driven by the smaller economies. The impact of the death rate in the G20 is twice as large as in the full sample.

The results are both statistically and economically significant. To illustrate the magnitude of the effects reported in the table, the difference between the lowest death rates (China, New Zealand, Singapore, and Thailand) and the highest death rate (Peru) explains a depreciation of more than 12 percentage points.

The individual observations and regression lines are shown in figure 2 for the G20. The figure plots the effective rate of appreciation (on the y-axis) against the August death rate (on the x-axis). Outliers on the downside include Russia (perhaps because it was especially affected by the decrease in oil prices) and Turkey (which had macroeconomic problems of its own before the COVID-19 crisis). The US dollar, euro, yen, and Australian dollar are also outliers on the upside. If we removed Russia and Turkey from the sample, the main outlier would be the United States. The United States is the only country whose currency has not significantly depreciated even though it is severely affected by the pandemic. 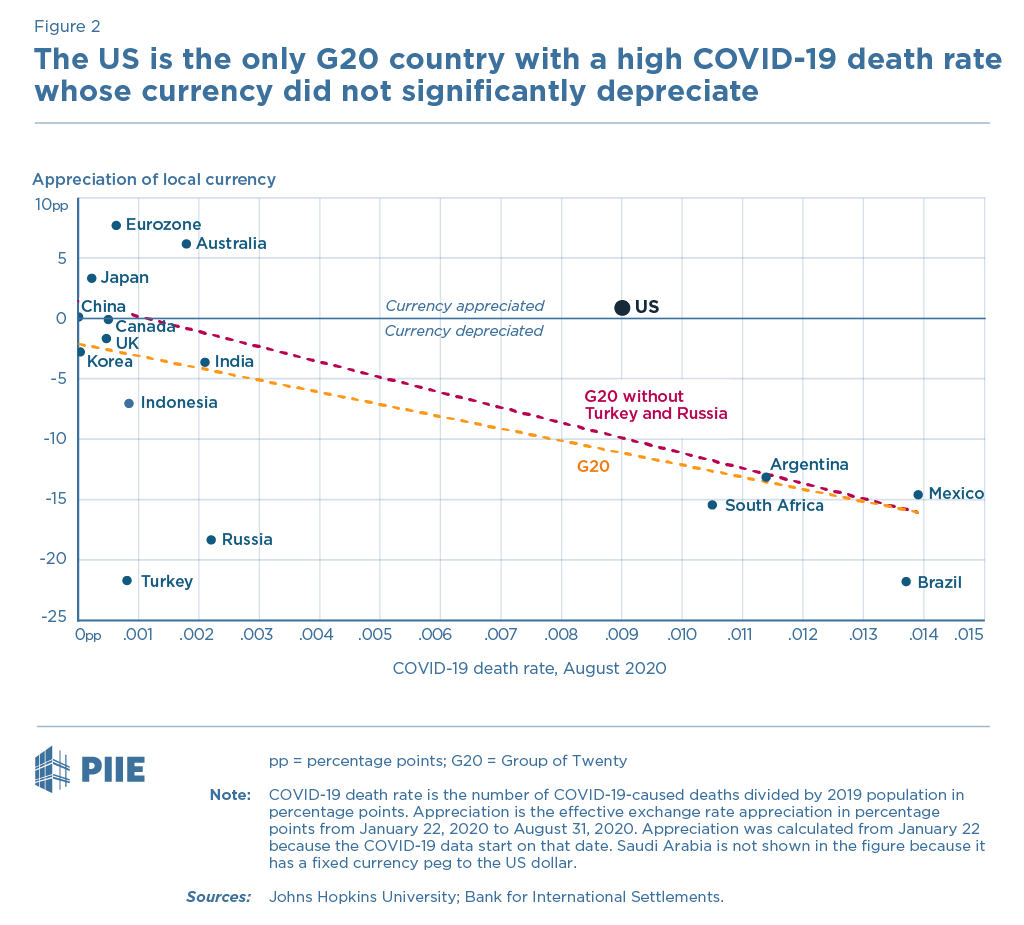 Based on this simple regression, thus, it does not look like the dollar’s exorbitant duty has disappeared. Rather, it has been masked by the fact that the pandemic affects the United States more than it affects  Japan or the euro area. Based on the cross-country regression, the dollar should have depreciated by 12 percentage points more than it has (11 percentage points if we do not include Russia and Turkey). We interpret these gaps as the appropriate measure of the dollar’s exorbitant duty in the COVID-19 crisis.