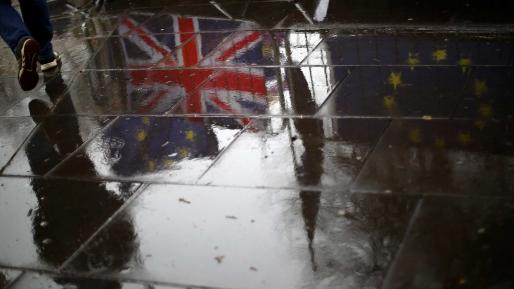 After two years of threats and bluster, President Trump and China reached a “phase one” trade deal incorporating some minor wins while kicking the hard stuff down the road. Prime Minister Boris Johnson, in gearing up for trade negotiations over the economic relationship with the European Union, may well take note and look for an early ceasefire while postponing tough choices into the future.

Like Trump with his China trade war, Johnson goes into the EU negotiations trying to minimize the fallout from the damaging policies he had pushed for—a potentially “hard” Brexit that he championed last year.

Trump’s phase one deal is a limited trade ceasefire, pulling back on some tariff hikes but leaving most others in place in return for China increasing purchases of US agricultural products[1] and other goods and new arrangements on China’s intellectual property rights (IPR) and technology transfer policies. Tough issues like ending Chinese subsidies for state-owned enterprises and protecting US technology are to be negotiated later, perhaps in a second term.

Johnson would seem to have a stronger negotiating hand. Unlike Trump, he has just won a sweeping election victory, and on January 31—the latest deadline to leave the European Union—he will have gotten Brexit “done” as promised. Since returning to office, he has repeatedly ruled out extending the status quo Brexit transition period beyond the expiration date of December 31, 2020, insuring an extremely ambitious timetable for these trade negotiations. As Johnson has also ruled out maintaining close—and quickly negotiable—economic and regulatory relations with the remaining EU countries, this tight deadline leaves only one realistic option for a quick phase one deal—a shallow trade agreement focused on eliminating tariffs and quotas for some goods. A “phase two” next year is thus likely.

But speaking for the EU Commission, Brexit czar Michel Barnier has indicated that a shallow phase one agreement on goods must be accompanied by guarantees that EU fishermen retain access to UK territorial waters and UK fisherman can sell fish in the European Union. Also to be agreed to is the so-called “level playing field” provision, in which the European Union will only grant tariff and quota-free access to UK goods if Johnson agrees to EU standards on environmental and social regulations, state aid, and tax matters. It seems clear that with another “no deal deadline” looming over the negotiations, as was the case with former Prime Minister Theresa May, the European Union will be able to dictate many of the terms for such a quick phase one deal. Whether Johnson will accept such demands is uncertain.

A refusal by Johnson would lead to another cliff-edge Brexit at the end of 2020. Even if he agrees to such a shallow deal on tariffs and quotas in goods, many other trade barriers would remain in place, to the detriment of a modern interconnected economy like that of the United Kingdom in 2020. British rejection of country-of-origin rules and the internal market’s common industrial standards would also likely inflict prohibitive new costs on the United Kingdom’s automotive and advanced manufacturing sectors, which rely on cross-border supply chains from Europe. Pharmaceuticals face similar new high barriers outside the internal market, as do chemicals and agricultural goods in the absence of agreeing to sanitary and phytosanitary issues in phase one. Meanwhile, the successful UK services sectors appears likely to be left out of a shallow goods-focused deal.

Perhaps Johnson will accept the loss of thousands of jobs in supply-chain dependent manufacturing and the services industries. It seems a bold bet, though. His government’s commitments to maintain bans on US hormone-treated beef and chlorinated chicken and stick with the European Union on preserving Iran’s nuclear deal have undermined the prospects for a meaningful free trade agreement with the United States.[2] The possibility of fudging a hard Brexit in order to avoid a potentially permanent growth slowdown in Britain from a “phase one only” or “no deal" must be appealing to Johnson.

Once the effects of a shallow phase one deal become clearer and UK job losses loom in 2021, Johnson may try to preserve British advanced manufacturing and services jobs by renouncing the option to diverge from EU regulations—a key right that will have been won through Brexit. He will still have taken back sovereign control for Britain but simply have exercised it by deciding not to diverge. Moreover, if the European Union becomes more convinced during 2020 that Johnson will stay in Europe’s geopolitical camp, it may trust him and, in return for a UK financial contribution (i.e. pay-to-play), agree to maintain much of the United Kingdom’s current market access to the European Union in services and other sectors dependent on regulatory approvals.

Like the future phase two deal between Trump and China, which seems certain never to conclude, EU-UK trade negotiations after 2020 may never reach a final settlement. This unending negotiating process itself, however, and the constructive ambiguity it introduces to EU-UK market openness—officially temporary but de facto open-ended—will be the goal.

Ironically, not striking a final deal including services for quite some time, because such a final deal would be a so-called “mixed agreement” and require a politically infeasible full ratification by all 27 member state and EU parliaments, might be key to keeping EU and UK advanced manufacturing and services markets open to each other after 2020. Keeping phase two negotiations open, and market openness hence temporary in nature, would allow EU leaders and Johnson more wriggle room to keep trade flowing in the short run. After that, who knows.

Brexit still need not become a political and economic disaster, as long as a final deal is not reached too quickly.

1. It is unclear, though, whether agreed Chinese agricultural purchases will exceed the pre-tariff war level.

2. A quick and dirty “limited regulatory convergence” agreement in some sectors not requiring congressional approval remains an option for Johnson and Trump in 2020.

The UK and the EU Should Prevent Mutual Assured Damage